DESOTO – DeSoto Mayor Rachel Proctor cares about DeSoto and she said being the mayor of the city just feels right.

Proctor grew up in DeSoto, is a graduate of DeSoto High School and her family still lives in the community so indeed, there is a personal connection to her passion for her current leadership role.

“I am most proud of my leadership here [in DeSoto] because I am a product of this community,” Proctor said. “My teachers that taught me still live here, friends and their parents I grew up with still live here so it is important to me that we make DeSoto the best it can be because for me it is not a political thing. This is very personal for me because a lot of people that I love dearly are part of this community. So, to make sure this city is the best it can be is very key to me, it is what pulls me out of the bed every morning to make sure we work as hard as we can for DeSoto.”

Voters elected Proctor to fill the unexpired term for Mayor, which had been left vacant when former Mayor Curtistene McCowan passed away leaving the need for a replacement.

Proctor had been the Mayor of DeSoto only three days when the worst ice storm in the metroplex hit the city. Complicating matters even more, the need to provide shelter, while navigating challenges presented by the COVID-19 pandemic.

“I have shown myself to be a leader who is responsive to the needs of the community and truly cares about its residents,” she explained. “I can remember being sworn in – maybe three days – and we got hit with the worst winter storm our state has ever seen. My instincts just kicked in and I can remember I really didn’t sleep a good five hours that entire week because we were just up and I was on social media every night to keep the residents informed and to keep everyone encouraged.”

The city, under her guidance, also hosted a water collection drive. In 24 hours, the community came together during the brutal winter storm and collected over one thousand bottles of water.

Indeed, Proctor never seems to think twice about pushing up her sleeves and getting the job done.

“I believe I am a leader who cares about the people and to know we are in this thing together and we will get through this thing together [during the winter storm]. That speaks to an innate ability in terms of making sure that whatever, by any means necessary, we get done what we need to get done to make sure our residents are taken care of.”

Proctor also said she believes she is the best person for the job. “I am really running for this seat again because I am committed to finishing the work we started. It has been a year-and-a-half and we have accomplished a lot. And coming from a person who has been on council and who has seen progress and not seen progress – I cannot move anything forward by myself, I can set the tone and pace for progress, however it takes getting a consortium of council to really push the initiatives forward.”

The mayor also has an innovative approach to government if you watch her in action. She’s constantly seeking new ways to solve problems in the community and specifically focused on engaging key stakeholders.

Accomplishments & An Eye On the Future

Her accomplishments during her term so far have included a focus on public safety with an eye toward understanding and working with the city’s Police Department. Together they are collaborating to create innovative ideas to combat crime in the city overall.

In fact, according to Proctor, while some have said crime has risen in the city as of late, the statistics seem to indicate certain types of crime are almost cyclical. When analyzing the data, crime in DeSoto has trended down over 29% in the last five years.

“So DeSoto is safer now than it was in 2017 from a general aspect,” Proctor said. “That is one of the things that has me most excited about seeking re-election for another term – I think things are going very well. There are some initiatives like, of course Public Safety, all those things are your standard things that you always have as a priority. Things outside that that I am really proud of is we also started some initiatives and even events and engagement within our community too. Even a lot of our older residents who have been in our community 20 or 30 years or longer – we have been seeing them really reach out and asking how they can get involved whether that is serving on a board or just giving feedback – these are a few things I am really proud of.”

During her time in office as Mayor, the city held its first MLK Day Celebration. Moving forward this will be an annual event in DeSoto. There was also the recent Homecoming Celebration to honor the city’s 73rd birthday with former mayors and council in attendance. 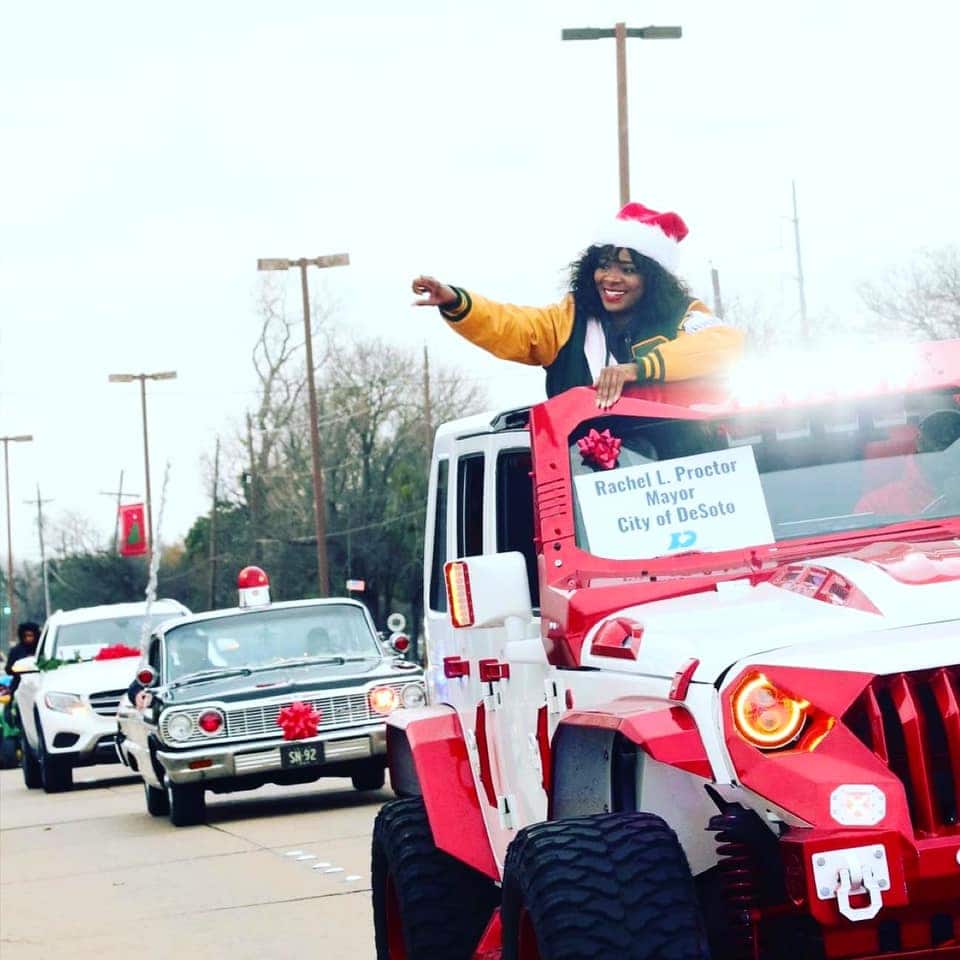 She also points to the importance of economic development in DeSoto. It’s important to her to bring more healthy options to the city – dining and retail – while also considering the overall picture.

Hampton Road Development is a project Proctor, and the City Council are working on. She is proud of the fact they are setting a solid foundation in terms of moving forward specifically with that project.

“I know we have been talking about it since I have been on council,” she said. “We really made some good headway with getting that plan off the ground and casting a strong vision for what we want that one-mile stretch to be.”

Also, in terms of economic development Proctor early on in her term created a Developer’s Roundtable bringing developers and people in locally to explain what it will take to get the job done regarding their standpoint as to what DeSoto looks like.

“Cities don’t develop cities, developers develop cities. It behooves us to build these relationships so we can give developers who come in our vision to really give us what we want to see and work together as partners on that,” she added.

Grow DeSoto Marketplace, the city’s small business incubator, was a project Proctor spearheaded with an EDC board member. She continues working to see the growth and changes there.

As for next term’s goals if she is re-elected Proctor said the Public Safety Coalition is high on her list. “That is an initiative we are working to pull together not only for our law enforcement but also helping the community to engage to help us as it pertains to public safety.”

There is also her citywide literacy initiative because of her strong love for books as a reader and published author.

“We know that our ISD has had some challenges in the area of literacy so this would be a joint effort with them,” Proctor said, “also taking it citywide to really focus.”

And there is a summer job and intern program.

Some residents might say they have noticed the changes in DeSoto since Proctor has taken office. She says she has felt it too.

“There is a different energy and I have seen change,” she concluded. “Just having the experience of being a council member and mayor pro tem and a community member there is a different energy now I am seeing in people wanting to get engaged and people taking a concern and giving us feedback and coming to meetings. All feedback is helpful depending on how you apply it and that helps us refocus and put that energy where it needs to be to see some real change.”