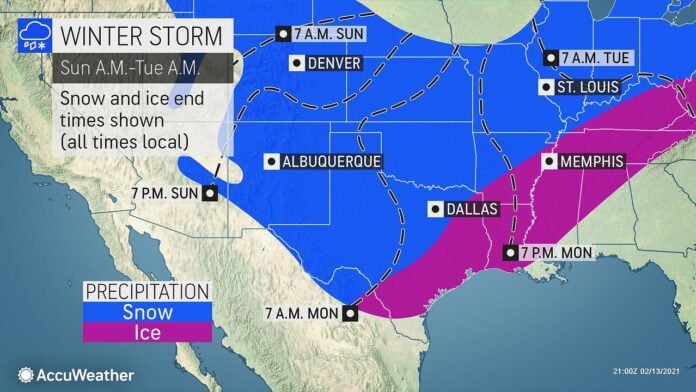 Winter Storm Will Pack A Punch in Texas

AccuWeather Global Weather Center — February 13, 2021 — The widespread cold, snow and ice that is affecting much of the nation this February is the most active winter pattern across the country since the 1902. In some regions, the extreme cold and snow/ice is even more unusual. For example – the major snow and ice storm in Texas followed by the extreme cold is likely the most significant since December 1989.

The same storm that will bring snow to Seattle and Portland in the Pacific Northwest is expected to dive southeastward into the southern Plains this weekend before turning northeastward early next week.

This storm is expected to produce a massive area of snow and ice from the Rockies through the Plains and eventually into the Northeast. 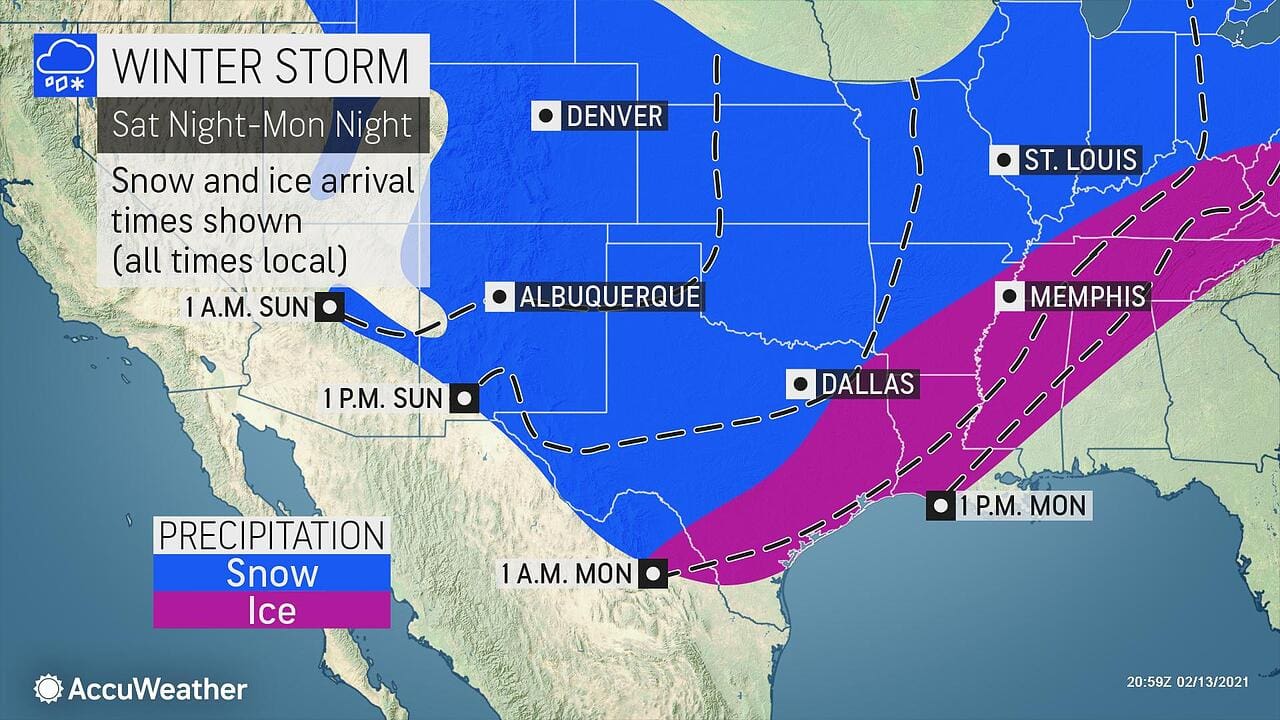 The combination of heavy snow, increasing winds and bitter cold may lead to blizzard conditions over the southern high Plains late in the weekend.

Travel may be nearly impossible along stretches of I-40 and I-35 later this weekend due to snow covered roads and near zero visibility.

Farther south and east, there is expected to be enough freezing rain to bring down tree branches and power lines from south and east Texas through much of Louisiana into Mississippi and northern Alabama. Residents should be prepared for the potential for power outages and dangerous, if not impossible travel. Icy conditions are anticipated in the Houston area by Monday morning.

Unfortunately, the coldest air mass of the season will be arriving with and behind the storm. Any snow or ice that does accumulate will be very slow to melt early next week.

Record cold is possible all the way down to deep south Texas Monday night with the potential for a freeze in the Rio Grande Valley.

As the storm marches into the South Central states from Sunday to Monday, it will strengthen. Portions of Colorado, New Mexico, northwestern Texas, western and central Oklahoma and southwestern Kansas will face heavy snowfall with accumulations ranging from 6 to 18 inches from Saturday night to Sunday night. 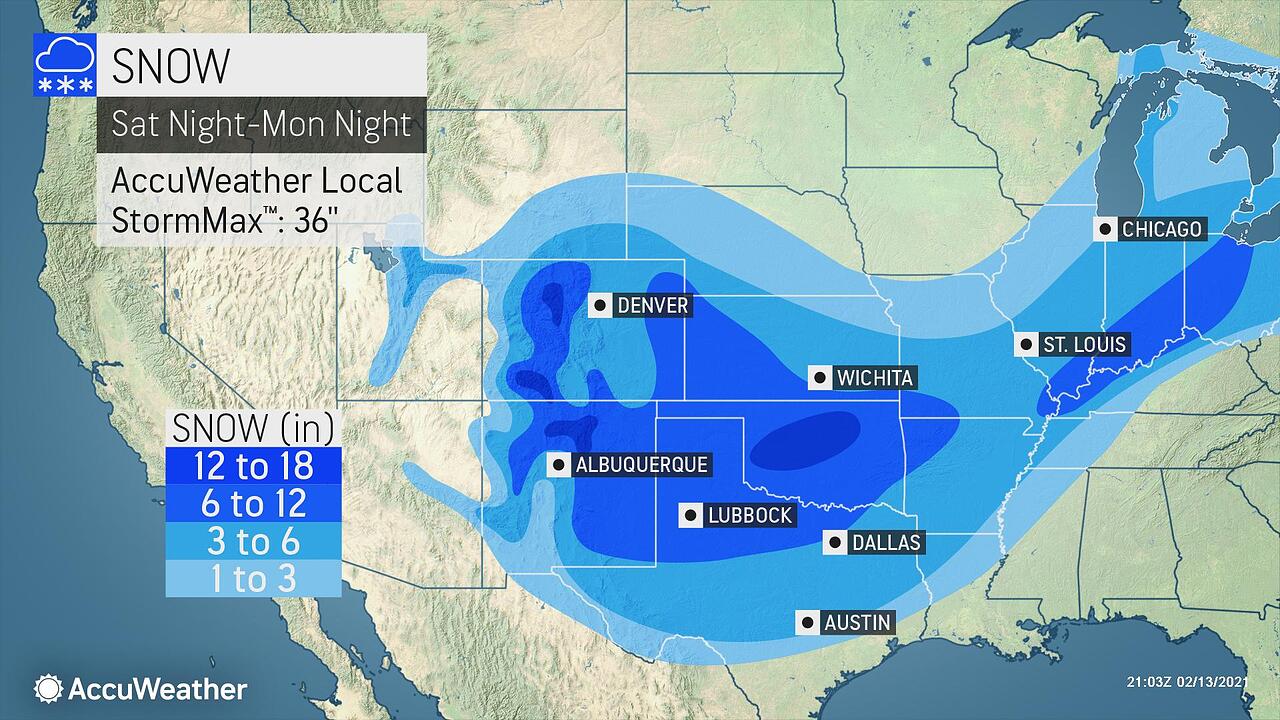 AccuWeather is projecting a 3- to 6-inch snowfall in Dallas from the storm Sunday into Monday. The city receives an average of 1.6 inches of snow per winter. There are some winters in which little to no snow falls and other winters where only a few inches fall over the course of the entire season. This storm can easily bring multiple seasons’ worth of snow all in one shot. Last year, only 0.2 of an inch of snow fell during the entire winter.

Yet another major winter storm could come right on the heels of this first winter storm and bring similar impacts to parts of the region later in the upcoming week.

For more information on this event, see the AccuWeather.com story here: https://www.accuweather.com/en/winter-weather/close-to-60-of-usto-have-snow-ice-on-the-ground-by-next-week/899168

Governor Abbott announced he will request a Federal Emergency Declaration from the White House to make additional resources available for communities impacted by this weather event.

“Every part of the state will face freezing conditions over the coming days, and I urge all Texans to remain vigilant against the extremely harsh weather that is coming,” said Governor Abbott. “Stay off the roads, take conscious steps to conserve energy, and avoid dangerous practices like bringing generators indoors or heating homes with ovens or stovetops. Our emergency response to this winter weather requires a collective approach between state agencies, local officials, and Texans throughout our communities to ensure the safety and security of the Lone Star State.”

The Governor addressed power and energy concerns on Monday and Tuesday. Power companies already have crews in place, and other states have deployed power crews to Texas to assist in potential power outages. The Texas Railroad Commission has suspended regulations to ensure churches, hospitals, residences, and other human resource facilities have access to gas throughout the winter weather event.

The State of Texas is asking Texans to begin conserving energy now to ensure power and energy are available early next week by unplugging devices when not in use, closing windows and blinds, and adjusting thermostats to 68 degrees or below. The Governor and Texas Division of Emergency Management (TDEM) Chief Nim Kidd also discussed the increased risk of carbon monoxide poisoning in such conditions and urged Texans to avoid heating their homes with ovens or stovetops and only use generators or grills outdoors and away from windows.

Local officials have established 34 warming centers in communities across the state and sent numerous vehicles, wreckers, ambulances, and personnel to assist in stranded motor operations and community support. Governor Abbott urged Texans to stay off the roads if they can and immediately call 800-525-5555 for roadside assistance if they become stranded on the road. The Texas Department of Public Safety has activated over 3,000 troopers that are working 24/7 to assist communities with their response. The Texas Military Department has also deployed Guardsmen to perform welfare checks in remote areas of the state.

Previously, the Governor issued a disaster declaration for all 254 counties and deployed a number of resources throughout the state to assist local officials in their response. Governor Abbott also ordered the Texas State Operations Center (SOC) to expand its daily operations to 24-hours a day through the end of next week. The Texas Department of Transportation (TxDOT) began pre-treating roads this past Tuesday and will continue to treat roads in the coming days.