MIDLOTHIAN – Earlier this year, Midlothian City Council member Art Pierard – Place 6 was killed in an auto accident. Due to the tragedy, his seat was open and on the ballot last week. With four contenders, Tiffany Carra and Hud Hartson were the two candidates with the most votes to win the seat for the unexpired term. In order to avoid a runoff, one candidate needed 50.1% of the vote, but with votes split four ways this didn’t happen.

We interviewed Tiffany Carra to give our readers a look at where she stands on some issues facing Midlothian residents.

Focus Daily News: You were good friends with Art Pierard and you have said you ran to finish what he started, tell me about that?

Tiffany Carra: Art ran because people were being taxed out of their homes. The three-year annexation plan was about to be finalized, and seniors were selling their homes because they could no longer afford the payments. He felt strongly about allowing seniors to feel secure in their homes despite rising home values, and about those who were recently annexed who were unable to vote in a bond election that would affect them only 6 weeks after the election. He ran on a platform that taxes shouldn’t push people out of their homes. He worked first to get the senior tax freeze, then to lower the tax rate two pennies. When I say that I want to finish what he started, I want to finish his work of making sure that city services are balanced with property owner tax burdens.

FDN: Many locals say Midlothian is a “good ole boys” system do you agree and how can that be overcome if true or a rumor that needs to be changed?

TC: I believe that there may have in the past been a “good ole boy” system. Could there still be one? Sure, do I think that it is as deeply impacting us as it once was? No. Communication is the great uniter, I learned that when I first started to get involved with the city. There wasn’t much communication back in 2015. Sure, you could reach out personally and you would get a response, but there was not much in the way of proactive communication. This led to many citizens thinking that there were backroom deals going on, that the city council was up to no good, and all they wanted to do was frivolously spend our tax dollars. It didn’t matter that council members lived and worked right next to us as neighbors, this was the perception. In most recent years we have seen those tides shift, council has begun to interact more regularly with citizens on social media, the city hired a Public Information Officer, and meetings are recorded and live streamed.

As a citizen, the best way I can say to overcome a “good ole boy” system is to get plugged in: read the agendas, attend/watch the meetings that interest you, make the calls, be the squeaky wheel. Get to know the people making the decisions for our city. As a council person the best way I have witnessed this system being overcome is to have an open door and an open mind, as well as communication and transparency. I have already checked all those boxes as a citizen, I plan to keep that track record up as a council person. No citizen’s worth is determined by how long they have lived here.

FDN: How do you and Hud’s vision differ in how you would like to see the city grow, etc.?

TC: I really haven’t seen much on vision for city growth from my opponent. However, I can tell you my vision for the city is one that balances the tax burden on our homeowners while supporting local small businesses in town. I first dipped my toe in Midlothian city politics during the Planning and Zoning for Midlothian Towne Crossing (Kroger), at the time Midlothian’s budget was based predominantly on industry and roof tops. There just wasn’t much for sales tax dollars being spent in town to alleviate some of the tax strain on property tax rates.

This is a perpetual balancing act, and city council’s partners do a great job here. 4A does a great job attracting established commerce to our town, which is a win for everyone. Our Chamber does a wonderful job supporting our smaller businesses, which is another win. However, it is the city council’s job to make sure they are all working together in concert – small business and big business. This can be done through approved zoning, special use permits, and ordinances. My vision is a collaborative one with our board and citizen partners to address growth proactively instead of reactively, to plan for the future of Midlothian 10 to 20 years down the line not just today.

FDN: How are you equipped to address the rising racial tensions in Midlothian?

TC: Luckily, our leaders have done a great job ensuring that racial tensions are not rising as much in Midlothian as they are in some of our larger neighbors. Additionally, we have some great community partners who are our boots on the ground doing the work in Midlothian. Education. Education. Education is key to me here. As well as keeping my heart open to listen to those coming to me with issues, leaning on our community partners such as The Midlothian Project to report the community temperature for me, and keeping my mind open to educating myself to be able to appropriately respond

FDN: Midlothian seems split between those embracing growth and those resisting growth – how do you plan to help council find a balance if elected?

TC: In the past 20 years our town has grown 500%. In the year 2000, we had a population of less than 8000, October 2020 we are certified at over 35,000. That means that the growth train is already here, if we wanted to stop it, we should have done it 20 years ago before it left the station. Change is hard, people don’t care for it, and one of the most dangerous statements in the English language is, “Because we always have.” However, instead of resisting the inevitable we need to shape it into what we want for the future. That means thinking creatively, challenging the status quo, and looking toward the future instead of reacting to the present. I believe I bring all those traits to the table.

FDN: Is there anything you want to say about COVID-19 and how you see that changing the city and what you believe can be done?

TC: As of this morning Midlothian is leading the pack in Ellis county active COVID-19 cases. While we did not ask for COVID-19 we are dealing with it. In my travels around town, I know that city and school district leaders are aware of the risks and responding as COVID-19 issues arise. And as with any change life must go on, we just must learn to adapt to it. If that means we need to socially distance, wash our hands more frequently, and potentially mask up then so be it. Americans have historically always found a way to not only survive adversity, but to rise from it stronger and thrive, which is actually why I love the concept of Rosie the Riveter so much. I have no doubt that this is just another hurdle that we will emerge stronger from. Oscar Wilde said, “What seems to us as bitter trials are often blessings in disguise,” more apt words could not have been applied to 2020.

TC: While I may have not lived in Midlothian my entire life, I have made it my home, jumping headlong into embracing this city. My track record over the past 5 years shows that you don’t have to be part of a “good ole boy” system, as indicated in your first question, to be educated and involved in our local government. Over the past 5 years, I have been appointed to 1 committee, spoken a variety of times on a variety of topics in citizens to be heard, been added to a city council agenda personally, organized over 450 citizen purchased first responder meals during Stay Home Stay Safe orders, raised over $2000 for local charities, attended most if not all Park Workshops for Community Park Phase II, advocated for recorded council meetings, and when they didn’t do it I did it myself recording over 11 hours of workshops and council meetings.

I believe that as a mother of young children and a woman I bring a unique perspective and feminine touch to a council that currently lacks that. Both my track record of consistent involvement, years before filing for election, and the lack of feminine perspective sets me head and shoulders apart from my opponent.

A runoff election for place 6 between candidates Hud Hartson and Tiffany Robinson Carra will be held on December 8 from 7 a.m. to 7 p.m. Early voting will take place November 23 through 25 and November 30 through December 2 from 8 a.m. to 5 p.m., and December 3 and 4 from 7 a.m. to 7 p.m. The Midlothian Conference Center, 1 Community Circle, is the location for all voting. 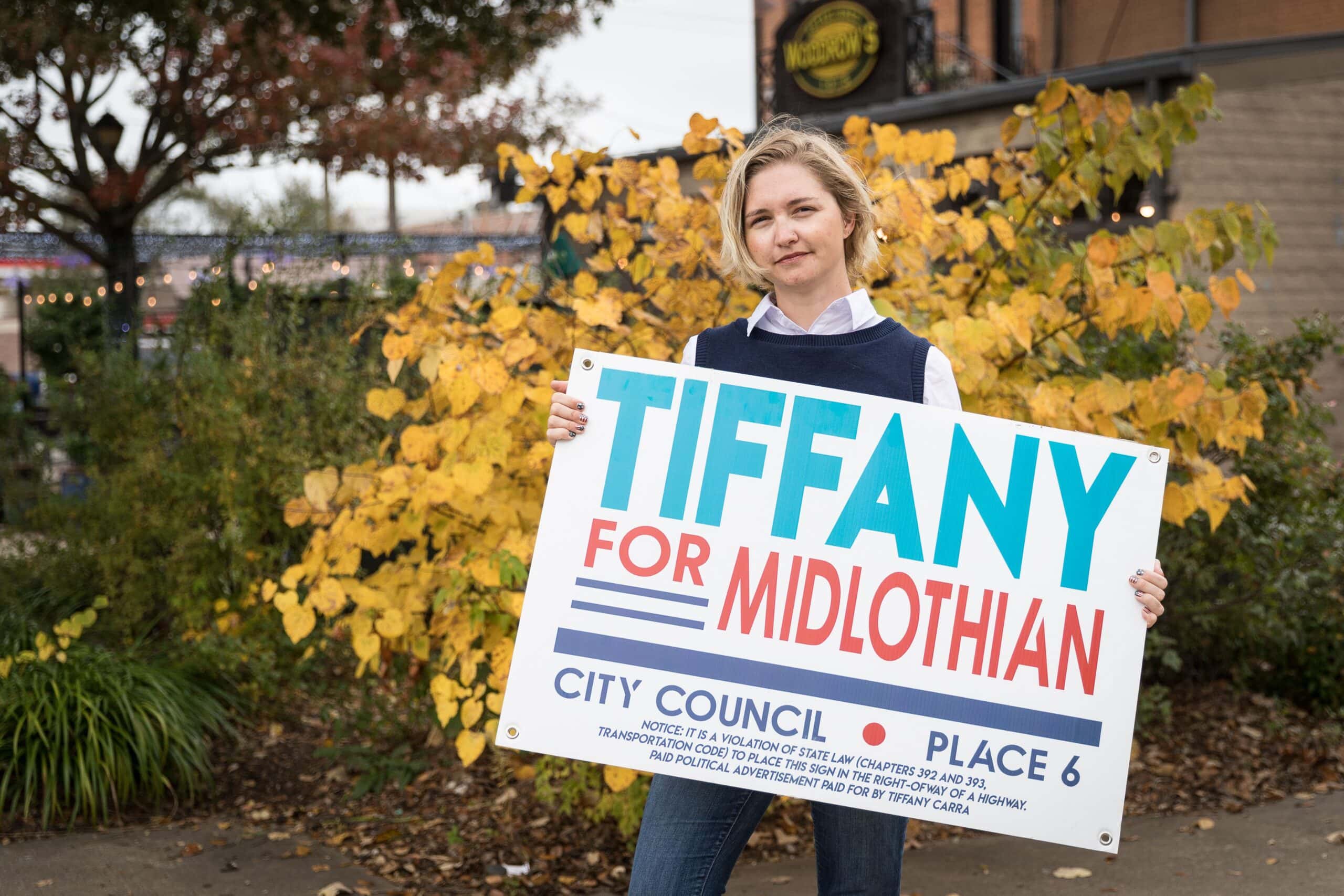