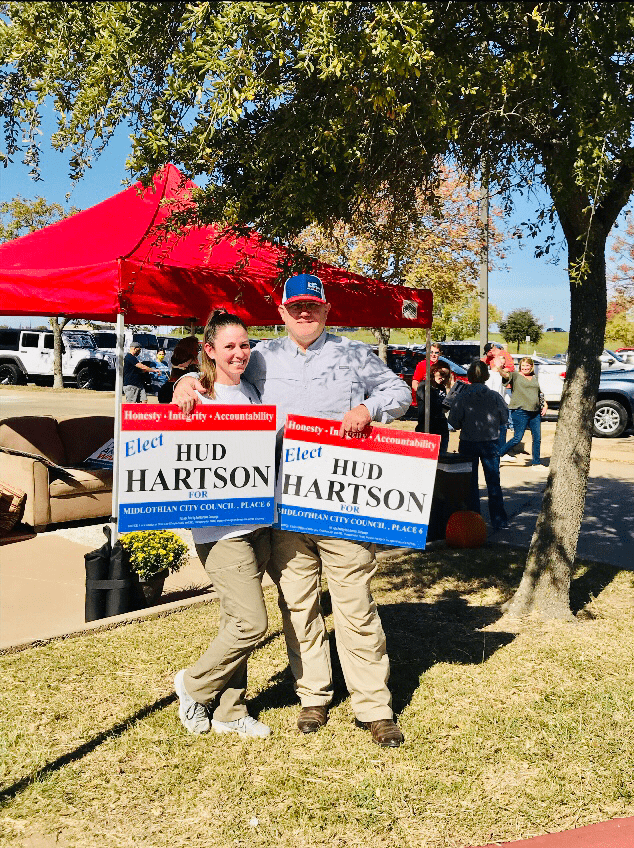 MIDLOTHIAN – Due to the tragic death of Midlothian City Council member Art Pierard – Place 6, his seat is open and was on the ballot in the November election. There were four contenders with Hud Hartson and Tiffany Carra being the two candidates who received the most votes to win the seat for the unexpired term.

Hartson spoke about his thoughts for the unexpired term if elected in the runoff election to be held in December.

Focus Daily News: How will you attempt to finish what Art Pierard began in this council seat?

Hud Hartson: Art Pierard leaves big shoes to fill. As with anything in life I believe we must all stand on our own two feet and not try being anything but ourselves. Saying that, Art was extremely good at working with others on the council when they disagreed. I hope to carry that trait with me on the council.

FDN: Many locals say Midlothian is a “good ole boys” system do you agree and how can that be overcome if true or a rumor that needs to be changed?

HH: I do not feel Midlothian is a “good ole boys” system. The city has a hard time finding applicants for its many boards. The mayoral position and city council place two seat went unopposed. We need more citizens to get involved and be part of the city governmental process. We have a very welcoming and inclusionary city if people put forth the effort to be a part of it.

FDN: How do you and Tiffany’s vision differ in how you would like to see the city grow, etc.?

HH: I’m not sure what my opponents plan is for growth in the city, but I have developed a plan after talking with many citizens and former city council members. I believe I am the right person to bridge Midlothian’s past with its bright future. We need fiscally responsible growth that gets ahead of our population boom by planning our infrastructure and setting aside money for roads before congestion on our busiest roads become a problem. We must work to protect our towns historic buildings so that we don’t lose our heritage and our small-town feel. And we must also work to keep the taxes as low as possible and at the same time give our citizens the best police and fire departments we can.

FDN: How are you equipped to address the rising racial tensions in Midlothian?

HH: Your question assumes that Midlothian has rising racial tensions. I don’t believe this to be the case. Several of my endorsements come from minorities. I’ve asked them and many others if they believe Midlothian has a race issue and not one of them believes that to be the case. Midlothian is a welcoming city is a great place to live for everybody.

FDN: Midlothian seems split between those embracing growth and those resisting growth – how do you plan to help council find a balance if elected?

HH: I don’t see Midlothian as split into two groups in this regard. I believe every person moved here because they love the way it is at that moment for them. Some may want the growth to stop, but the sad reality is that the growth won’t stop anytime soon. The good news is that there are ways to slow the growth and do it in a fiscally responsible way though and that’s exactly what I intend to do if elected. I firmly believe Midlothian can retain its small town feel even as it grows.

FDN: Anything you want to say about COVID-19 and how you see that changing the city and what you believe could be done.

HH: The city’s response to COVID-19 has been perfect in my opinion. They haven’t forced unwanted rules or regulations on businesses. They have made sure the police and fire departments have been ready by supplying them with PPE (personal protective equipment) and they have worked closely with the Ellis County Judge Todd Little, who is responsible for overseeing COVID-19 related issues in the county.

FDN: Anything else you want to say?

HH: I have lived here my entire life. I love this city and have the understanding needed to lead us into the future. I can bridge our past with our future in a fiscally responsible manner. Whether we are a city of 40,000 or 60,000 I will work diligently to keep Midlothian’s small-town feel. Midlothian needs leaders that can unite us with new ideas and leadership and not divide us for their own gain. Please feel free to see more about my campaign on Facebook by searching for “Elect Hud Hartson for Midlothian City Council, Place 6.”

A runoff election for place 6 between candidates Hud Hartson and Tiffany Robinson Carra will be held on December 8 from 7 a.m. to 7 p.m. Early voting will take place November 23 through 25 and November 30 through December 2 from 8 a.m. to 5 p.m., and December 3 and 4 from 7 a.m. to 7 p.m. The Midlothian Conference Center, 1 Community Circle, is the location for all voting.