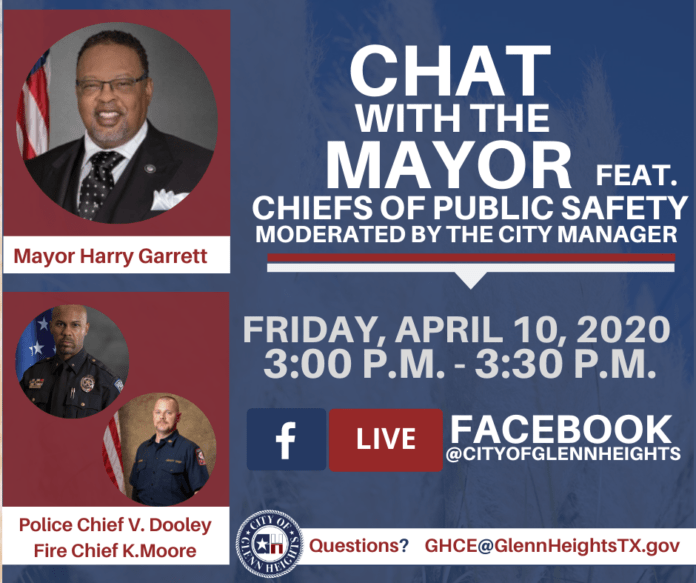 Not in the City of Glenn Heights.

Staff in Glenn Heights recently launched a new outlet to connect the city’s Mayor Harry Garrett, with residents during the COVID-19 pandemic.

Lauren Lewis, Glenn Heights Community Engagement Administrator, said, “While the counties have called for residents to shelter-in-place, the City of Glenn Heights has found a way to connect Officials and residents together to inform and engage with one another virtually.”

The Mayor and key senior staff launched the “Chat with the Mayor” series at the end of March.

“Viewers are encouraged to submit their questions in real time via a chat box located in the broadcast window, which further promotes transparency and allows for viewers to receive answers in real-time,” said Glenn Heights Mayor Harry Garrett. “Every question that is submitted receives an answer.”

The first “episode” as the Glenn Heights staff is calling it aired March 27, 2020. The live stream featured a conversation between the Mayor and City Manager David Hall. It centered on the City’s initial response and actions taken to combat COVID-19. The key message from that conversation was for residents to follow shelter-in-place guidelines detailed in the Mayor’s Amended Order.

The second episode aired April 3, 2020. The chat featured a question and answer session between Mayor Garrett and the city’s Fire and Police Chiefs. This live stream was for the purpose of explaining public safety operations modifications in response to the Covid-19 pandemic.

“It’s important to hear from our Chiefs because Public Safety is an integral part of our services and commitment to the citizens to keep them safe within the city limits of Glenn Heights,” Garrett said.

Key takeaways from the April 3 live stream included details such as both departments are now wearing personal protective equipment (PPE) while making routine traffic stops or home visits. Each respective department has also made procedural changes as needed due to the virus spread.

“The City of Glenn Heights began preparing for COVID-19 in early March of 2019. Glenn Heights Fire Department made protocol changes based upon recommendations from CDC, Fire Department Infectious Disease Control Officer and our Medical Control Doctor. Those changes that were made addressed staff and patient safety concerns while attempting to reduce the spread rate,” stated Chief Moore.

The police department shared the same sentiments as the Fire Department and were eager for the public to be aware of changes made for everyone’s safety.

“As we manage our response to the CoVID-19 pandemic, I promise you that the Glenn Heights Police Officers will continue to serve and protect our community with the same commitment and dedication that they do every day,” Chief Dooley added.

In less than one week, the Chat with the Mayor featuring the Chiefs has been viewed just under 1,000 times. To view the conversation and learn more about operational changes, visit www.glennheightstx.gov. Chat with the Mayor and special guests are live streamed every Friday at 3 p.m. . You can find them on the City of Glenn Heights Facebook business page.