DESOTO – The Battle of Beltline really became a “thing” in 2013 according to a live “DeSoto In Depth” program Thursday morning covering the fiercest High School football rivalry in the region coming Friday night.

A unique perspective was shared by DeSoto Mayor Rachel Proctor, State Representative and former DeSoto Mayor Carl O. Sherman and the mystery guest who turned out to be former DeSoto Eagle Runningback/Cornerback BJ Hanspard. Hanspard currently plays for the Baylor Bears in Waco.

As a reminder, the current Baylor Bear Cornerback had committed to Arkansas just one day after an unofficial campus visit even though many had believed he would follow his father to Texas Tech. His father, Byron Hanspard (who also played for DeSoto High School) was a unanimous All-American and the Doak Walker award winner in 1996. Byron went on to be drafted in the second round by the Atlanta Falcons and play professional football for them. He set a team record (since broken) in his rookie year with a 77 yard run from scrimmage. The Hanspard name is well-known in the City of DeSoto and in the annals of Eagle football. 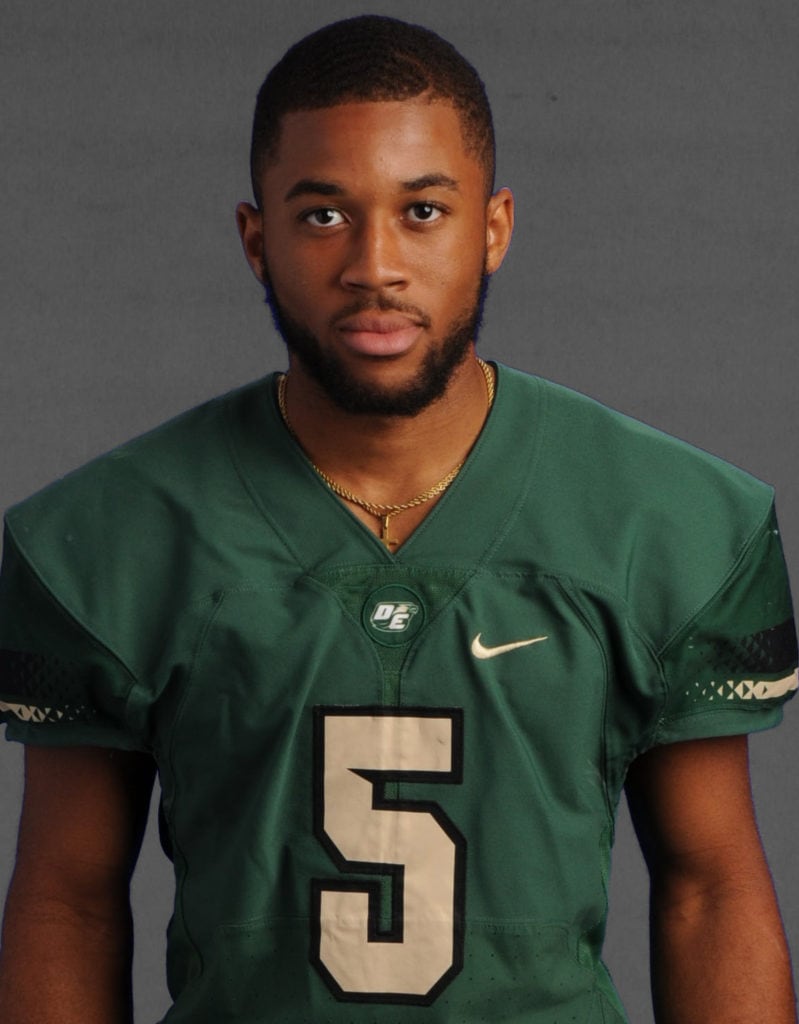 BJ Hanspard retracted his University of Arkansas decision however, and ended up at Baylor when the Razorback head coach Bret Bielema parted ways with the Razorbacks’ organization.

Hanspard remembers his time as an Eagle well, and is ready for his alumni to walk away with a victory tomorrow night.

No matter who wins though, Mayor Proctor said it will be a win-win for either city. Proctor and Cedar Hill Mayor Stephen Mason have a “friendly wager” for Friday night’s showdown.

Whichever team loses, that city’s mayor must wear the other team’s jersey while also making a donation to the Tri-City Animal Shelter.

“So, it is a win-win situation for the Tri-City Animal Shelter,” Proctor said.

But everyone knows DeSoto’s Football coach Claude Mathis is ready this year. Even so, over the years there have been some upsets.

In 2016, when Hanspard was on the DeSoto Eagles football team he was part of the fierce rivalry as the Eagles punished the Cedar Hill Longhorns with a score of 33 Eagles to 18 for the Longhorns.

Hanspard remembered, “That was the last good Battle of Beltline in terms of the final score.”

That year the Eagles logged two victories against the Longhorns.

“We were able to play the Battle of Beltline twice. The first time we went into their home, so we knew we had to ‘bring it,’ we had to have the city with us.”

For that game, the scoreboard indeed did all the talking.

The second game that year, Hanspard remembers, was the playoffs and played in Jerry’s country at Texas Stadium.

“We buckled up,” Hanspard said, adding it was a blessing “to be a part of that.”

“Part of that” meaning the Eagles 16-0 record that year.

The DeSoto Eagles weren’t so lucky in years following, taking a hit in 2019 with the Battle of Beltline when the Longhorns came in with 28 to the Eagles 27.

“That one hurt,” Proctor said.

These days Proctor said, “It is family until game day – and it is all about Eagle country.”

District 109 State Representative Sherman added his thoughts on the rivalry since his wife, Michelle is a former Longhorn and athlete from Cedar Hill.

A high point so much in fact that Sherman remembers extra stands having to be brought into the stadium for the Eagle/Longhorn rivalry each year.

Sherman also reminded those listening Thursday morning that the DeSoto High School Football team has had more NFL athletes in the nation than any other high school.

As for Friday night’s game, the Eagles will have the home advantage this year and Proctor said, “We are going to have to do different this year.”

She echoed the sentiment that Hanspard said earlier “we are not rising to the occasion, but instead falling back on the training.”

Proctor added “The Eagles have the right coaches, right staff and the right season.”

Sherman also said the Hanspard family over the years has always meant much to the City of DeSoto.

“They instilled in their children the legacy,” Sherman said.

The Baylor Bears Cornerback said that growing up with his dad first and foremost it was “definitely a blessing to have a father in the household who has done such amazing things on and off the field.”

He also added his father showed him he still had what it takes when the son got a little too cocky recently.

Best Rivalry Around, Battle of Beltline

With all eyes on the Friday night Battle of Beltline, Cedar Hill ISD Public Information Officer Michael Sudhalter said, “The Cedar Hill-DeSoto Battle of Belt Line is one of the premier rivalries, not just in Texas, but in the United States. Both programs regularly make deep playoff runs. There’s just six miles between the two campuses, and many of the scholar-athletes grow up attending church and playing sports alongside one another.

Step aside, Texas-Oklahoma, Alabama-Auburn and Ohio State-Michigan, the best rivalry around is here in the Best Southwest. From my perspective, I arrived at Cedar Hill ISD in March 2020, and the first Battle of Belt Line Game I saw was a classic when Cedar Hill defeated DeSoto, 49-42 last fall at Longhorn Stadium.”

The game will be broadcast live on 660-AM – The Answer, at 6:30 with a one-hour Countdown to Kickoff, or WFAA will have the game on their YouTube channel.