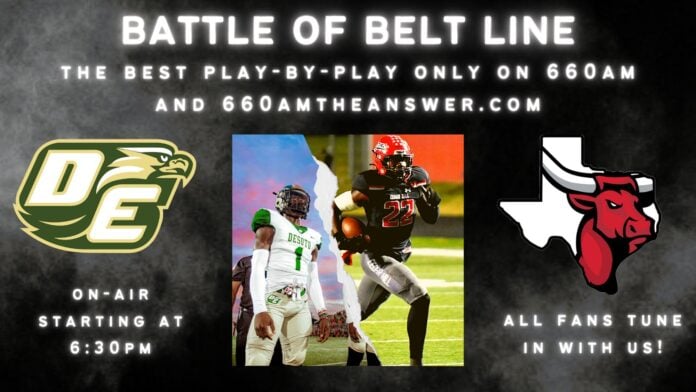 In the past 10 years, DeSoto has played Cedar Hill eleven different times with the Eagles 6-5 vs the Longhorns.

This includes one playoff game were DeSoto won 55-41 in 2016. The past three seasons the Longhorns have taken home the belt with dramatic wins.

Next, these two teams have won four state titles in the past 15 seasons. Anything can happen on the gridiron under the Friday night lights with a packed stadium.

Will this be another year with both teams as state title contenders? It’s too early to know. The two schools are less than ten miles apart. Therefore, it’s not out of the norm for these young men to see each other in church or other non school-relate activities. Some could even be related, so this Friday you could see a house divided.

Coach Mathis and his DeSoto Eagles have been on fire, as they have won their last two games by an average margin of 48 points.

Field general Matthew Allen is able to spread the ball around his dynamic playmakers to rack up points against his opponents. Allen has passed for 1,453 yards and 26 touchdowns in 6 games.

His main targets are Johntay Cook II, Mike Murphy and Stephon Johnson. These young men have the speed and size to make amazing plays.

The running game is led by sophomore Christopher Henley Jr., and this young man has already rushed for 400 yards this season.

Coach Carlos Lynn has put together a solid team that is on a a ee-game winning streak. The Longhorns have only been giving up an average of ten points per game on this winning streak.

Junior quarterback Cedric Harden II has played well with his arm doing yoman’s service. Harden has also been able to extend plays with his legs.

Watch out for wideouts Keunte Rhinehart and Jarrus Nicholson to make some big time plays in the game. Meanwhile, running back Jaylen Jenkins is looking to have another big game with his explosive runs.

The Longhorn defense will look to make the Eagles turn the ball over a lot, as Cedar Hill has averaged almost two turnovers a game.

Football fans who follow these teams understand why Friday nights are so amazing. When there’s nothing but talent and excellent coaching it is no wonder why WFAA named this the game of the week.

DeSoto Eagles host the Cedar Hill Longhorns this Friday night at Eagle Stadium. Hear all the play-by-play action on 660-AM – The Answer, beginning at 6:30 with a one-hour Countdown to Kickoff.