DeSoto Advances To State Semi-Finals With Win Over Cedar Hill

True to DeSoto form, the Eagles scored 20 points in the second quarter of the game at AT&T Stadium. Most surprisingly of all was the fact that the Eagles continued their offensive dominance throughout the second half.

Historically DeSoto (14-0) peaks in the second quarter with an average of 15.67 points. Saturday, the Eagles put up 22 points in the fourth quarter to knock the Longhorns out of contention for the Division 2 State Title.

Leading 27-13 at halftime Quarterbacks Shawn Robinson and Avery Davis would trade scores for the rest of the night. During the second half both District 7-6A teams put up 28 points each.

The only score in the first quarter and another touchdown three minutes into the second quarter made the difference for DeSoto.

Avery Davis threw for 463 yards and four touchdowns for Cedar Hill (11-3). He added 109 yards and two touchdowns on the ground.

As the playoff season wanes on the number of penalties has decreased with the increased caliber of play. Saturday both teams only got 6 penalties each. Nevertheless the types of penalties occurring at opportune times had major impact.

Much to DeSoto’s delight, the Longhorns failed to capitalize on Gardener’s gift. By the same token, they answered with two special teams penalties of their own, a false start and illegal formation.

Last week the DeSoto defense seemed to be lacking after the ten point deficit in their regional semifinal match against Abilene. Even with their last quarter surge to win 49-45, defense efforts still left much to be desired.

Straightaway, Free Safety Isaiah Stewart opened the match with an explosive stop on the kickoff return against Cedar Hill.

During Cedar Hill’s first drive of the game, lineman Brian Robinson laid the hammer down on Running Back Marquise Foreman. After Robinson forced the Longhorns to rethink their ground game, Davis answered with a 27 yard pass to Kaegun Williams.

Now facing 1st and goal at the 7 yard line, Longhorn fans were salivating at drawing first blood. Unfortunately, their thirst would go unsatisfied for another 22 minutes of play.

Davis carried the ball to the 2 yard line, but that’s as far as he would get. After two stopped runs, a timeout and incomplete pass, the Longhorns turned over the ball on the 2 yard line.

An eight play drive capped off by DeSoto Wide Receiver Emmett Perry, positioned the Eagles at the 22 yard line. Then, Quarterback Shawn Robinson would be caught behind the line of scrimmage on the option and lose the ball.

Defensive End Deven Lamp would recover the fumble for the Longhorns. Sadly, only to lose it again on a hand-off to Marquise Foreman. Kolby Watts recovered the fumble and set the Eagles up for their first score of the game.

Key To A Successful Title Run

The DeSoto defense is going to have to play flawlessly for the remainder of the season. If the Eagles want to exceed past glories, opponents cannot be allowed to get within two scores of the offense.

In the 2012 and 2013 seasons, the Eagles earned 5A regional titles but in the semifinals they failed to stop the high powered Allen offense. Thus, ending their state title dreams.

The next round of the playoffs will take place in Houston at NRG Stadium. Saturday, December 10 at 4p.m. DeSoto will face the Klein Collins Tigers (13-1).

A chartered DeSoto fan bus will leave at 8 a.m. Saturday. The cost is $40 per passenger which includes a game ticket. This is on a first come first serve basis.

Anyone under the age of 17 must be accompanied by an adult. For more information log onto www.desotoeaglesfootballboosterclub.com. 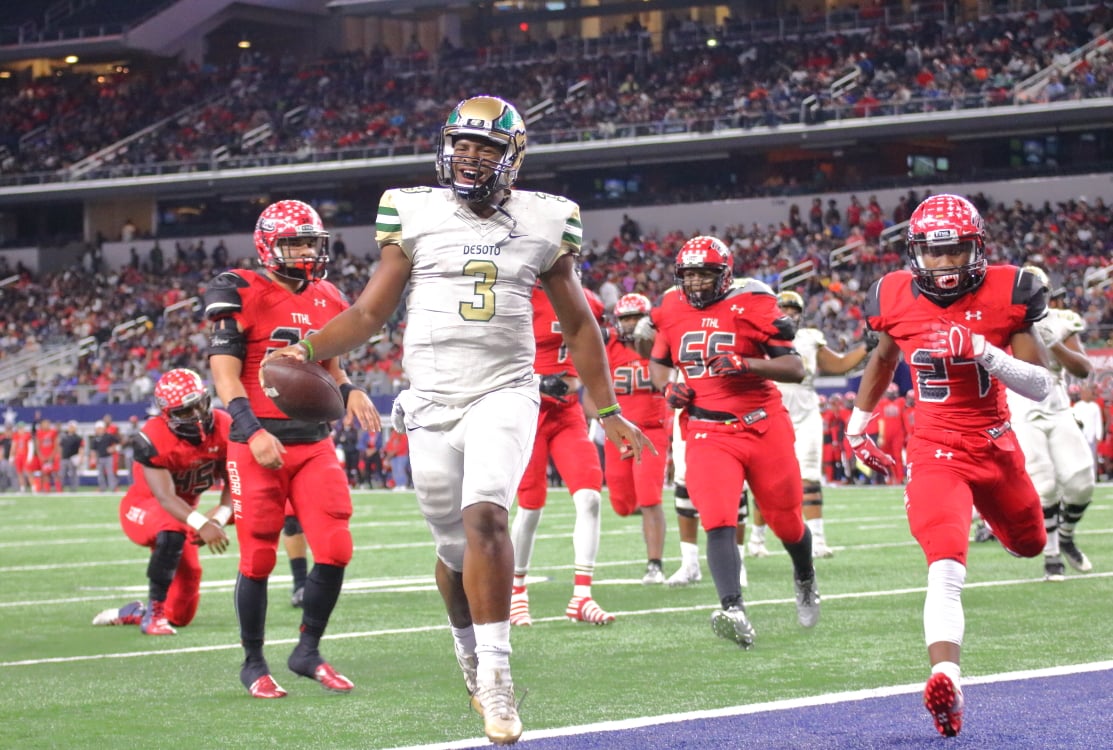