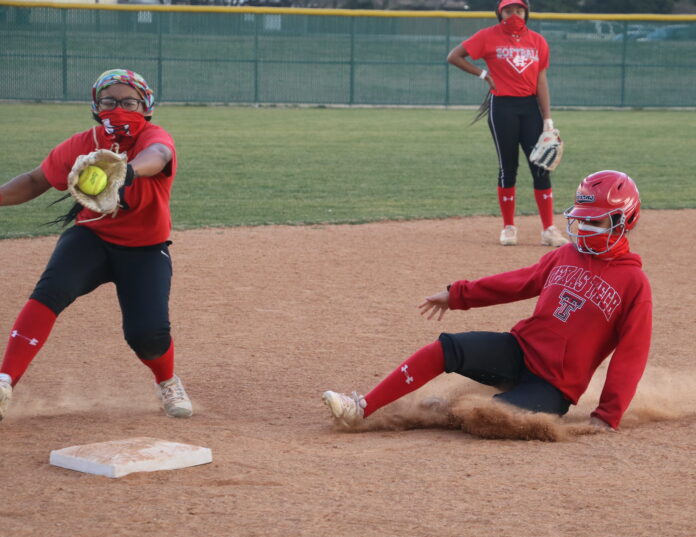 (CEDAR HILL, TEXAS) Cedar Hill head softball coach Jennifer Davis is optimistic about the upcoming season, which is set to begin on Monday at Lovejoy (weather-permitting).

Davis, a Cedar Hill High School Class of 2004 Graduate, led the Lady Longhorns to their best season in program history (a Regional Final in 2004) before going on to play college softball at the University of Texas-El Paso. Last year, she was selected to become an inductee in the Longhorn Legacy Athletic Hall of Honor.

Now, she’s ready to lead a team of 13 players, including nine seniors.

“This team can be as good as it wants to be,” Davis said. “There’s a fire burning in all of them. We will teach the fundamentals and important aspects of the game.”

The majority of the 2020 season was cancelled due to the COVID-19 Pandemic. Davis succeeds Jesse Bustamante, who resigned to become the Director of Human Resources and Special Education at Marlin ISD.

“Hannah is a huge leader on the team as a pitcher and a catcher – she commands the infield,” Davis said. “Alayna uses her voice on the field to lead the team.”

Sophomore third baseman Miranda Castaneda and senior catcher Charity Vernon will also be a key contributors for the team.

Cedar Hill will play in the Mesquite Tournament (Feb. 18-20) and the Coppell Tournament (March 4-6). In the middle of those, they’ll have the home opener vs. South Grand Prairie on February 23.

The Lady Longhorns will open 6A-11 Competition on March 9 vs. Waco.

Competing In A Tough District

Cedar Hill looks to advance to the postseason for the first time since 2018 when the current group of seniors were freshmen.

That season, they lost in the first round to Waco Midway, which is now a 6A-11 opponent.

Regardless of the outcome this season, Davis said the priority is on safety.

“I really want these girls to understand the importance of playing safe, keeping their masks on and sanitizing their hands,” Davis said.