Home News Historic Battle of Beltline Football Game Was a Winner for the Tri-City... 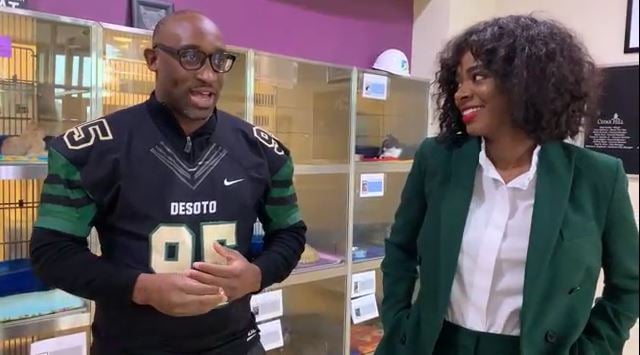 DESOTO – The Battle of Beltline game against North Texas High School football giants the DeSoto Eagles and the Cedar Hill Longhorns was a win-win for the Tri-City Animal Shelter Thursday morning.

While the game resulted in a Cedar Hill loss last month, a bet between the mayors of the two cities, meant everyone came out with a smile.

“To have this friendly rivalry between the two cities is amazing,” said DeSoto Mayor Rachel Proctor. “What we decided was whichever team lost the games had to wear the other team’s jersey while making a donation to the Tri-City Animal Shelter. I think that even though there can only be one winner at the game, the real winner is here at the Tri-City Animal Shelter to finally settle the score.”

Proctor looked over at Cedar Hill Mayor Stephen Mason who was wearing a red Longhorns Letter Jacket. After he spoke a few words, he took his jacket off to reveal a DeSoto Eagles Jersey. Of course he had to wear the jersey, since the DeSoto Eagles beat the Cedar Hill Longhorns that night. And a bet is a bet!

The Road To State

“It is cold and I did just happen to have this jacket in the back of my car,” he said before revealing the DeSoto jersey. “I want to add too, Mayor Proctor was an athlete when she was in school, I was an athlete when I was in school, we had this rivalry, but again we feel like this rivalry is bigger than in our boundaries for the simple fact that typically the road to state comes through our region. I thought it was fun and Cedar Hill was not the victor so for me to hold my end of the bargain I have to wear a DeSoto Jersey and I will reveal it now.”

A Win-Win For Animals (Eagles or Longhorns)

Mason also mentioned it was his decision to be able to choose the charity for the donation. “What better charity than a partnership that is already in place so I thought this would be a big win-win regardless of who won,” he said.

“This is a great way to show support and we are blessed to have the support of both cities,” Miller said on behalf of the animal shelter as birds screeched and dogs barked in the background.

“No matter what happens on the field, it is all love,” Proctor concluded. “We try to do what is best not only for our individual cities, but what is best for the region. So we in Desoto look forward to continuing to collaborate to make this area the best it can be.”

The Tri-City Shelter is located at 1150 E Pleasant Run Road. They are always looking for homes or donations for the many animals that come through the doors.