Severe Weather In DFW This week Increases Risk For Flooding

AccuWeather Global Weather Center – May 18, 2021 – Heavy rainfall is forecast to persist across the central and southern Plains this week, and AccuWeather meteorologists say that the wet pattern is likely to bring severe weather and substantial flooding.

Severe weather and heavy rain broke out across the southern Plains over the past few days, dousing much of the region with drenching downpours. As of Sunday night, rainfall totals soared above 6 inches in several cities in Kansas. Codell, Kansas, had recorded 8.16 inches of rain total.

The deluge intensified on Monday with Lake Charles, Louisiana, being flooded with more than a foot of rain. A flash flood emergency was issued for the city and surrounding areas with reports of vehicles stalling out in roads that were under water. As of late Monday afternoon, it was the third-wettest day on record for Lake Charles.

According to Louisiana State Police, I-10 in Baton Rouge looks like a river — it is closed in both directions right now.

By Monday night, cities in Texas reported over 10 inches of rain, with up to 16 inches in Fannett, Texas.

A tornado was reported in Bell County, Texas, on Sunday afternoon. According to the The National Weather Service’s (NWS) Storm Prediction Center, multiple homes had sustained minor damage from the tornado, and some outbuildings and chicken coops were also damaged or destroyed.

Later Sunday, reports of hail began popping up across the central U.S., with some hail stones surpassing four inches in size. Going forward, heavy rainfall is forecast for locations from eastern Colorado, Kansas and Missouri, on southward to the Gulf Coast for the next several days, hitting many of the same areas that had a wet end to last week.

“The combination of high pressure over the Southeast and a storm in the Southwest are going to work together to funnel a lot of moisture into the southern and central Plains this week,” said AccuWeather Meteorologist Jake Sojda.

“The flow out of the Gulf of Mexico will act as a fire hose, bringing a constant stream of moisture into the region for several days, leading to rounds of rain and thunderstorms each day,” explained Sojda.

The most widespread risk across the region is flooding.

The greatest threat for severe thunderstorms will shift around from day to day. In addition to the heavy downpours, thunderstorms will be capable of producing damaging wind gusts up to 80 mph, as well as hail and even an isolated tornado or two.

Major cities that may be threatened by the severe thunderstorms include Oklahoma City, Dallas, and Austin, Texas.

Motorists should be especially cautious of the changing weather conditions, as all of these factors could impact travel through Wednesday.

Small amounts of rain delivered with these storms, overall, could be beneficial to helping alleviate drought concerns, especially in western Texas and New Mexico that are still in severe drought. However, many locations are forecast to see too much rain over just a week’s time, instead forcing meteorologists to worry about flooding.

By the end of the week, widespread rainfall totals of 2-4 inches are expected from far-southern Texas and central Louisiana to parts of Kansas and Missouri. The corridor of highest rainfall amounts is anticipated in eastern Texas, including cities like Houston and Tyler, where as much as foot of rain is forecast. 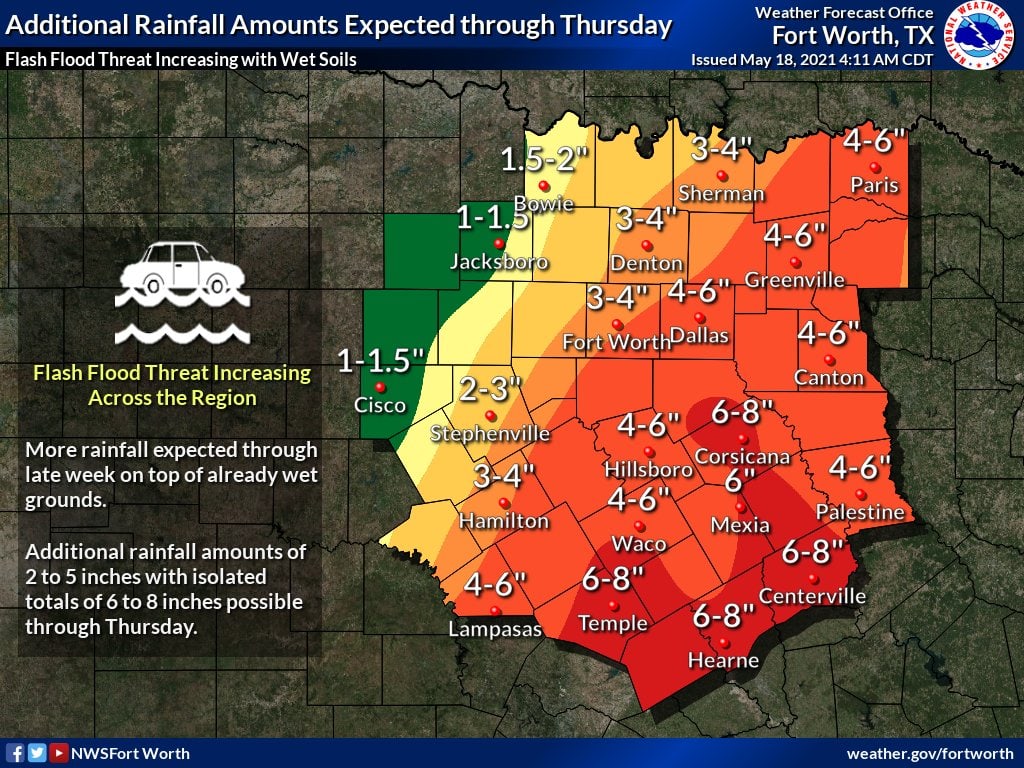 “Many rivers in eastern Texas registered at minor or even moderate flood stage at the start of this week. With this much rain on the way, rising water levels, and major river flooding, are likely,” said Sojda.

Such waterways that could be at risk for major flooding are the Bayou Dorcheat, the Calcasieu River the Sabine River and the Neches River that run across western Louisiana and eastern Texas.

On Monday night, NWS of New Orleans rolled out a Flash Flood Emergency for the southern portion of East Baton Rouge.