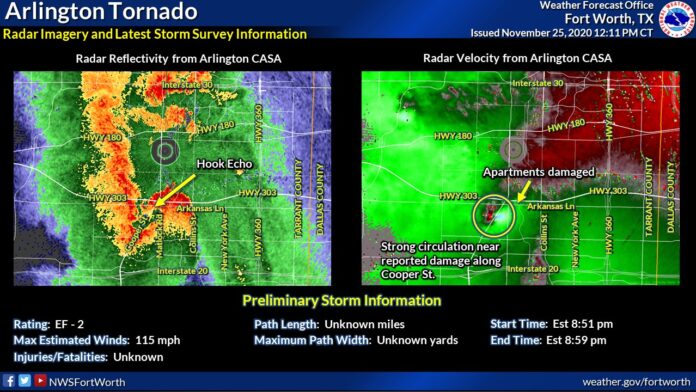 The National Weather Service says their survey team found EF-2 damage in south Arlington, near Pioneer Pkwy & S Center St. They report estimated max winds of 115 mph from last night’s storm. The severe weather was unexpected and caught many people off guard as they were out running Thanksgiving errands, etc.

12:17 PM: Our survey team has found EF-2 damage in south Arlington, near Pioneer Pkwy & S Center St. Estimated max winds of 115 mph. We will have more information on the path length and width later today.
Here’s a snapshot of the radar last night. #dfwwx #ctxwx pic.twitter.com/XaVRFwDZlZ

Texas Storm Chasers shared this video of the storm damage in Arlington. Residents that were home when the storm struck described hearing a “freight train” and tornado sirens going off repeatedly.

Safelite Auto Glass in Arlington is just one of several businesses that sustained damage from the storm.

At Burger Box on on Cooper Street south of Arkansas Lane, they experienced a structural collapse and vehicles in the drive-thru sustained major damage.

The Mirage and Waterdance Circle apartment complexes suffered significant damage with roofs missing or collapsed. According to officials, approximately 75 families have been displaced from those apartment communities. American Red Cross is assisting with providing shelter to those families.

National Weather Service will continue their investigation, saying it will take several days to determine the path and length of the storm. Meanwhile the clean-up continues today, as local assess the damage just one day before the Thanksgiving holiday. Fortunately, there are no reports of fatalities and injuries are minor.

According to the City of Arlington, the City’s outdoor warning siren was activated at about 9 p.m. due to a tornado warning that included parts of Arlington. Most of the damage is concentrated along Pioneer Parkway between Cooper Street and State Highway 360. They report at least seven buildings suffered serious damage. The damage includes torn off roofs, partial structural collapses and broken windows.

The city is continuing to assist with cleanup today. Residents are asked to contact the Arlington Action Center at 817-459-6777 for assistance with their unmet needs related to the storm.

While Arlington ISD is still assessing the damage, they don’t believe any schools were impacted. Superintendent Dr. Marcelo Cavazos urges parents of Arlington ISD students who need help because of the storms to reach out to their campus principal or the Arlington ISD Student Outreach Services team at studentoutreach@aisd.net for assistance.