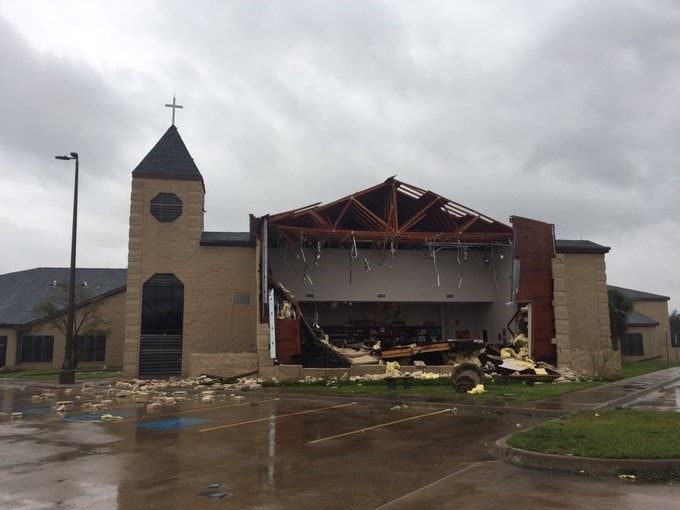 Several favorite travel destinations on the Texas Gulf Coast have been severely damaged by Hurricane Harvey. Rockport and Fulton on Aransas Bay were the first cities to be battered by the full force of the Category 4 hurricane winds as it made landfall August 25.

In an earlier column I wrote about the Aransas Bay Spring Fling my husband and I attend each year. Hosted by the Rockport-Fulton Chamber of Commerce, it’s one of our favorite events. We enjoy such activities as boating, fishing, hiking, biking, bird-watching, kayaking, and touring nature preserves. Of course eating freshly caught seafood right off the boats that come into the Marina is another favorite activity!

Charlotte Plummer’s Seafood at the Marina, and The Boiling Pot (Cajun food served family style) just down Fulton Beach Road, both had considerable damage from the storm. Owners are working hard to repair the damage. Craig Griffin, who owns Charlotte Plummer’s, told David Sikes at Corpus Christi Caller Times that he hoped to reopen soon.

The grand new Fairfield Inn where we stayed last spring was severely damaged in the hurricane. Most of the 120 people who had been staying there, hoping to ride out the storm in relative safety, left when a wall collapsed. Only a local TV news crew and some storm chasers remained throughout the storm.

Severe damage was sustained by the local high school, with students forced to attend school in neighboring communities while the school is repaired. Local chamber offices, courthouse, the Baptist Church, and a senior citizen facility were also badly damaged.

Some Good News After The Storm

Also on the good news front, the Lighthouse Inn at Fulton Harbor (lighthousetexas.com), where you can fish from a private pier or sit on the balcony and watch, came through practically unscathed.

An annual birding event we always wanted to attend is September’s Hummerbird festival (rockport-fulton.org).These tiny hummingbirds are said to nestle right in the hands of spectators, who flock to the festival each year. This year, the event had to be cancelled.

Last spring we took a driving tour to view wildlife in their natural habitat at Aransas National Wildlife Refuge. Getting out of the car for a better look, we were able to get much closer to giant alligators than felt comfortable. We all heard rumors of these confused creatures wandering the streets after being displaced by the storm. I’m sure those park rangers had a lot of fun trying to round them back up.

On a personal note, our favorite tourism friend from Rockport-Fulton Chamber of Commerce, Sandi Jumper, rode out the storm in San Antonio. With husband Randy, one dog and four parrots, her family found refuge in a La Quinta hotel room while a neighbor took custody of their other pets. Bad news came soon after the storm. The RV they had been living in while renovating their home in Rockport was totally demolished. The almost-finished house had a huge hole in the roof which resulted in flooding.

Our hearts are heavy to know what these friends and favorite destinations suffered. It’s encouraging to hear how determined they are to work together and rebuild. Storms and rumors of storms are all around us, but please don’t forget those good folks in Aransas County.