Dreaming About A Future In The MLB

(CEDAR HILL, TX) When Dylan Byrd walked on to Globe Life Field for the first time earlier this month, he began thinking about the endless possibilities.

“I was thinking about possibly playing there as a major league player,” said Byrd, a rising Cedar Hill High School senior. “It was amazing to know that MLB players play on that field all of the time.”

Byrd was one of four Longhorns who competed in the Texas Rangers RBI Academy All-Star Game earlier this month at the new $1.1 Billion ballpark in Arlington.

He was on one team, while Cedar Hill Class of 2020 Graduates Anthony Casteneda and Tony Gonzalez (featured in a Longhorn Newsroom story last month) and rising CHHS junior Channing Vernon were on the opposing team.

Byrd and Vernon are both members of the Adidas Baseball Select Team, which will travel to Florida and Georgia for tournaments this fall. Both players debuted on varsity last spring, but their seasons were limited, due to the COVID-19 Pandemic.

They both pitch and have known each other since Kindergarten. Byrd is a designated hitter, while Vernon plays in the outfield.

Byrd – who hit .294 with seven runs scored and a triple last season, hopes to play college baseball at Morehouse in Atlanta, while Vernon plans to play for TCU.

“Dylan has all of the tools to play at the next level, and we are looking forward to him making a big impact for our team in the spring,” CHHS Head Baseball Coach Travis Collins said of Byrd, who registered a base hit single in the All-Star Game.

Vernon hit .500 with six RBI and a triple in limited action as a sophomore.

“We are expecting exciting things from Channing this spring,” Collins said. “He will give us innings on the mound as left-handed pitcher and be one of our primary outfielders. Having Channing for two more years is exciting, and we look forward to seeing how he grows in the game.

Castaneda, a four-year starter for the Longhorns, was part of a district championship team as a sophomore. His senior season was shortened due to COVID-19, but he hit .375 with seven RBI, four doubles and a home run.

“Anthony is a phenomenal baseball player, a fierce competitor on the field, and a great teammate,” Collins said. “He was one of our “glue guys” and he knew when to keep the mood light and relaxed, but he also knew when to ask for more from his teammates.”

Byrd said he will miss pitching to Castaneda.

“He’s always in a good mood and always brought so much energy,” Byrd said.

Castaneda said it was a “surreal experience” to play at Globe Life Field and to watch his family enjoy the game there. Each player was allowed five tickets to the game.

Castaneda and Gonzalez started classes at Cedar Valley College last month. They are both part of the CVC Baseball Team, and they’re both studying Physical Therapy.

They are such good friends that they have considered the idea of starting a Physical Therapy practice together.

Regardless of what happens in the future, they’ll always have the seventh (and final) inning of the All-Star Game at Globe Life Field.

“I was pitching to my best friend in the MLB ballpark of my favorite team, like we were big leaguers – it was cool,” Gonzalez said. 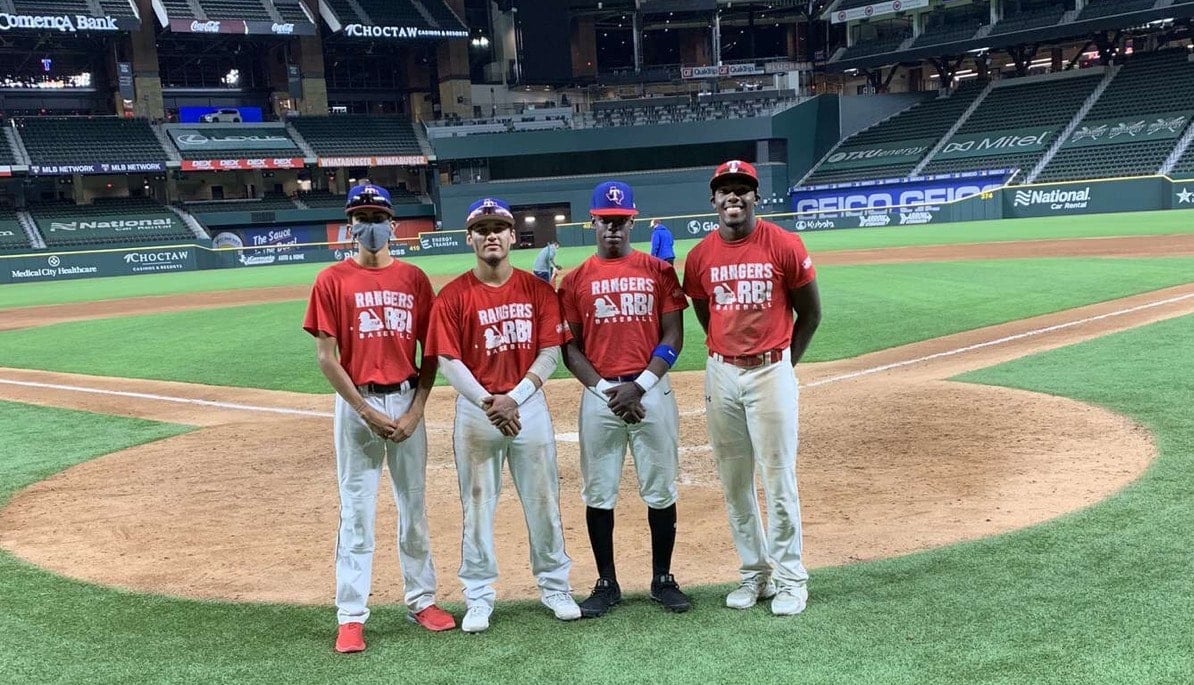