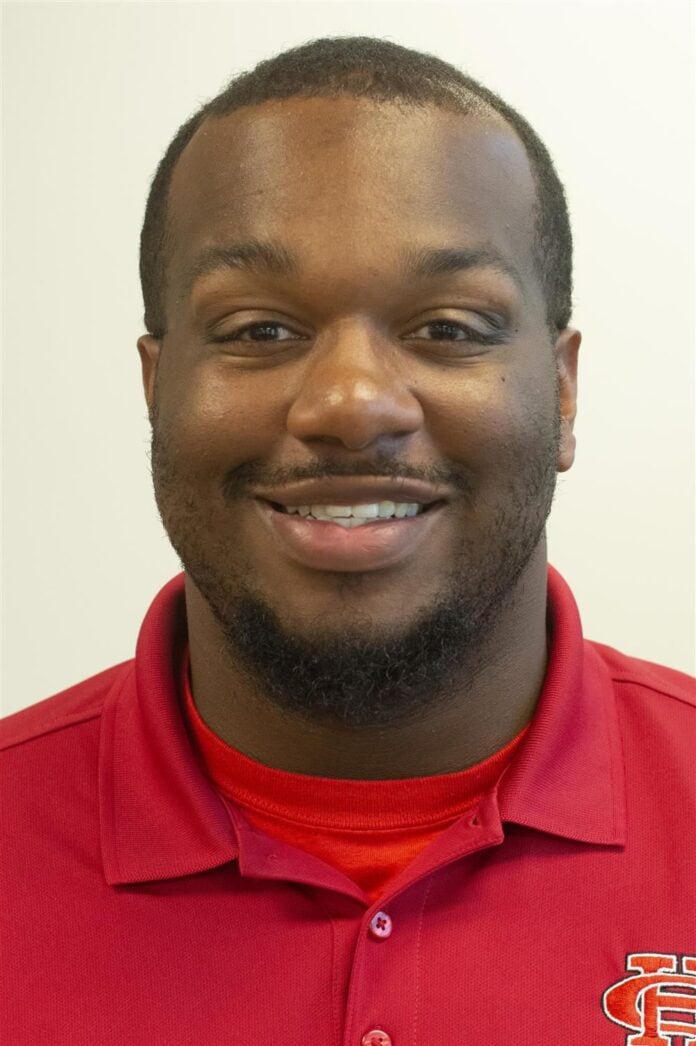 (CEDAR HILL, TEXAS) Adam Shead remembers the summer of 2004 like it was yesterday.

He had just moved to Cedar Hill and walked into his seventh grade Texas History class. His teacher was Kevin Benjamin, now the CHHS wide receivers coach.

Fast forward 14 years and the two are colleagues on the Cedar Hill High School Football Staff.

“It was almost surreal in a way to have the guys who taught me become my co-workers,” said Shead, a Cedar Hill High School Class of 2010 Graduate who’s in his third year of coaching the CHHS Offensive Line.

What happened during the 14 years between Texas History at Permenter and joining the staff of one of the Metroplex’s best football programs was equally as amazing.

Shead was a freshman in the fall of 2006 when Cedar Hill won its first UIL State Championship. He wasn’t on the varsity team that year but seeing that type of success motivated him.

Shead accepted a full scholarship to play football (left guard) at the University of Oklahoma. He made some Texas History during that time, but not the type those sporting Burnt Orange would appreciate.

Shead’s Sooners went 3-1 against Texas, 4-1 if you count his redshirt season of 2010 when he practiced with the team but didn’t play.

“That was always amazing to come back to Dallas and play that game in front of such a large crowd,” Shead said. “Growing up, you would watch that game on television every year, and there’s not a scholar-athlete in this area that wouldn’t want to play in that game.”

OU also won a pair of Big 12 Championships during that span and qualified for bowl games each year. During Shead’s junior year, Oklahoma upset Alabama in the Sugar Bowl.

“Oklahoma just felt like home, like I was supposed to be there,” Shead said. “The coaches told me that we’d have a chance to compete for a national championship, and we did.”

Shead played during the final years of Bob Stoops’ remarkable tenure in Norman, and he graduated with a political science degree.

Leaving Oklahoma proved to be an interesting journey. Shead went to a mini-camp with the Chicago Bears and had a tryout with the Washington Football Team. He played arena football in Washington D.C. and Orlando, Florida.

After his professional football career was over, Shead returned to Cedar Hill and began volunteering with the football team. Starting in 2018, he officially joined the staff as offensive line coach, and the team has qualified for the playoffs in each of his three seasons thus far.

“It was God’s plan the way this all worked out,” Shead said. “After my first year with Washington, I felt like something was missing. God was telling me to come home.”

Shead teaches Entrepreneurship and Video Game Design at Cedar Hill High School. He hopes to open his own business someday, and he has always had a strong interest in video games.

Last season, Shead coached one of the best offensive linemen in the country, left tackle Courtland Ford, who’s starting for the University of Southern California as a true freshman this season.

Shead has watched the team develop into a strong unit that is tasked with protecting Cedar Hill senior quarterback Kaidon Salter, a University of Tennessee commit.

“You have to put in the work and encourage the kids,” Shead said. “Once kids trust you, they’ll do everything you ask of them and do that at a high level. Because I played at OU and being from Cedar Hill, I take coaching the offensive line personally. We have a tradition and a certain standard to uphold.”

“I pull the best parts from each coach and share the best of what they taught me,” Shead said. “Football is a physical game at its core. You have to play hard and want to win more, and good things will happen.”