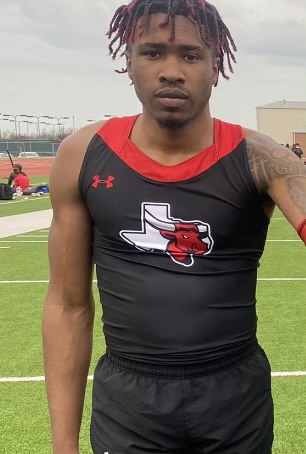 It had been a long time since DaCorey Ware had enjoyed the rewards of high school track success. It wasn’t anything he did, or even an injury that sidelined the Cedar Hill senior standout.

Like so many others across the nation and world, it was the COVID-19 pandemic. Now, he’s back and hoping to leave his final high school season behind him with some gold medals from the state track meet on his way to preparing to compete for the University of Illinois next year.

Ware was recruited by numerous colleges across the nation despite not being able to compete for a state championship in 2020. He decided on Illinois because he said it made him feel like family.

And yes, he understands he will be going from the warm temperatures that might even be close – or at – triple digits when he competes at state in Austin in May to the much cooler – even cold – temperatures of a state much farther north. But his track travels have taken him many places into many climates, plus there’s the inconsistent spring weather in Texas.

“It’s a challenge I’ve actually dealt with before and not afraid to do it again. Besides, we have a indoor facility (at Illinois),” he said.

He’s also ready to move to colder temperatures, he said.

“I’m ready for it. I feel like the snow time in Dallas was just a prelude, and I loved every bit of the snow,” he said.

Will He Take A State Title With Him?

Ware has competed in track ever since elementary school. He tried playing football as well, but quit to focus on the sport he loves most. And while he has enjoyed much success in high school, he’s still seeking that elusive trip to state. It appeared that was coming last season, but then COVID-19 hit.

“We had an amazing team last year. And I can say I was having an amazing year of my own and it got cut short. So we all said we will be attempting to win state next (this) year.”
Ware runs a leg of two of the top relays in the state, the 4×100 meters and 4×200 meters.

Athletic Skill Runs In The Family

Ware is also among the best in the state individually in the 100- and 200-meter dashes.
“I honestly love the 4×100. It always gets my adrenaline pumping for the rest of the meet to run,” he said.

Ware comes from an athletic family, as his mother ran track in high school, and his brothers played football, basketball and ran track. He said he will be the first from his family to attend a university. He plans to major in kinesiology.

“All I ever watched and had curiosities for was being a chiropractor, so as time went on I took classes for me to be in the medical field,” he said.

And as he prepares for district and the upcoming postseason, he has a special request, especially considering they are making up for lost time.

“I would love y’all to wish us luck on our road to state,” he said with a smile.