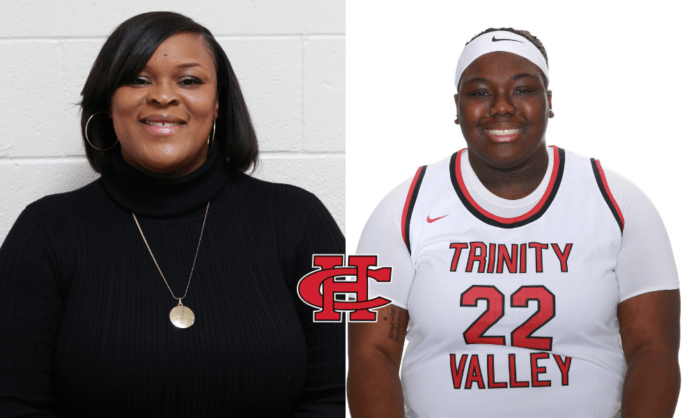 Ivy’s success on the court is important to her, but not as crucial as the ultimate outcome – eight sophomores will graduate with Associate’s Degrees this month.

One of those eight sophomores is forward Taylor Hutchins, a Cedar Hill High School Class of 2019 Graduate who averaged 6.7 points and 4.3 rebounds this season. Hutchins will continue her basketball career this fall at UT Arlington.

Ivy started for four years of varsity basketball – one for head coach Amy Tennison and three for Andrea Robbins.

Building Relationships On & Off The Court

She went to San Jacinto College (SJC) in Houston, but injuries prevented her furthering her playing career.

Ivy graduated from SJC and enrolled at nearby, University of Houston (UH), but she continued to work as a volunteer coach with SJC.

After graduating from UH, Ivy moved to West Texas to became a graduate assistant at Wayland Baptist in Plainview and then to East Texas to coach at Tyler Junior College for five years.

After that experience, she had a chance to join the TVCC staff. Halfway through the 2019-2020 season, Ivory was promoted to head coach at age 31.

The transition went smoothly, as Ivy went 17-0 with the Cardinals. She had a chance to lead the program to its ninth national championship (their eight championships are the most in Women’s NJCAA Basketball).

Due to the COVID-19 Pandemic, the tournament was canceled and the top-ranked Cardinals didn’t have a chance to prove what many expected – that they were the best team in the NJCAA.

“I put in the work, went up the ladder and worked my way up,” Ivy said. “That is the reward for staying diligent and working with the right people. I’m at a young age, and I appreciate the opportunity.”

While leading such a successful program, Ivy doesn’t dwell over the pressure – she embraces it.

Now, she faces the challenge of recruiting. With eight sophomores graduating, Ivy returns just one player for the 2021-2022 season.

“You know the pressure, and you do everything you can to keep the program where it is and to elevate it,” Ivy said. “Trinity Valley is the place to be, and it’s a blessing that I’m here. It’s a place where I can make a difference.”

Ivy knew of her fellow Longhorn, Hutchins, from her time as an HBU assistant coach.

“I saw her play a lot and thought she was a good player,” Ivy said. “She has talent and skills, but it’s her IQ that sets her apart. Cedar Hill scholar-athletes know how to win. The coaches are setting those kids up to play at the next level.”

Hutchins signed with Vanderbilt University, when she was a senior at Cedar Hill. Hutchins said the Nashville-based school wasn’t a good fit, and she realized that she didn’t want to be 680 miles away from home.

She transferred to Trinity Valley with hopes of returning to another NCAA Division I program. At Trinity Valley, she made an impact this season as the Cardinals advanced to the NJCAA Championship Game in Lubbock, which they lost, 67-60, to Northwest Florida.

Hutchins missed that game due to a concussion that she suffered in a semifinal win over Chipola (Florida) Junior College.

“We would have won if I’d been able to play in the championship game,” Hutchins said. “I would have brought us some type of impact in that game.”

Hutchins Looks To The Future

“Playing for Cedar Hill was so much fun,” Hutchins said. “The teachers at Cedar Hill wanted to see you do well. And basketball was fun, although we know when to be serious on the court.”

Hutchins is looking forward to returning to the Dallas-Fort Worth Metroplex, with UT Arlington next season. She’ll have a chance to play for Shereka Wright, a former WNBA player who was previously on the Vanderbilt staff.

Hutchins will major in Kinesiology with plans to become an Athletic Trainer. She’s glad to have the opportunity to play in front of family and friends.

The Mavericks play their home games at the on-campus College Park Center, which is also home to the WNBA’s Dallas Wings.