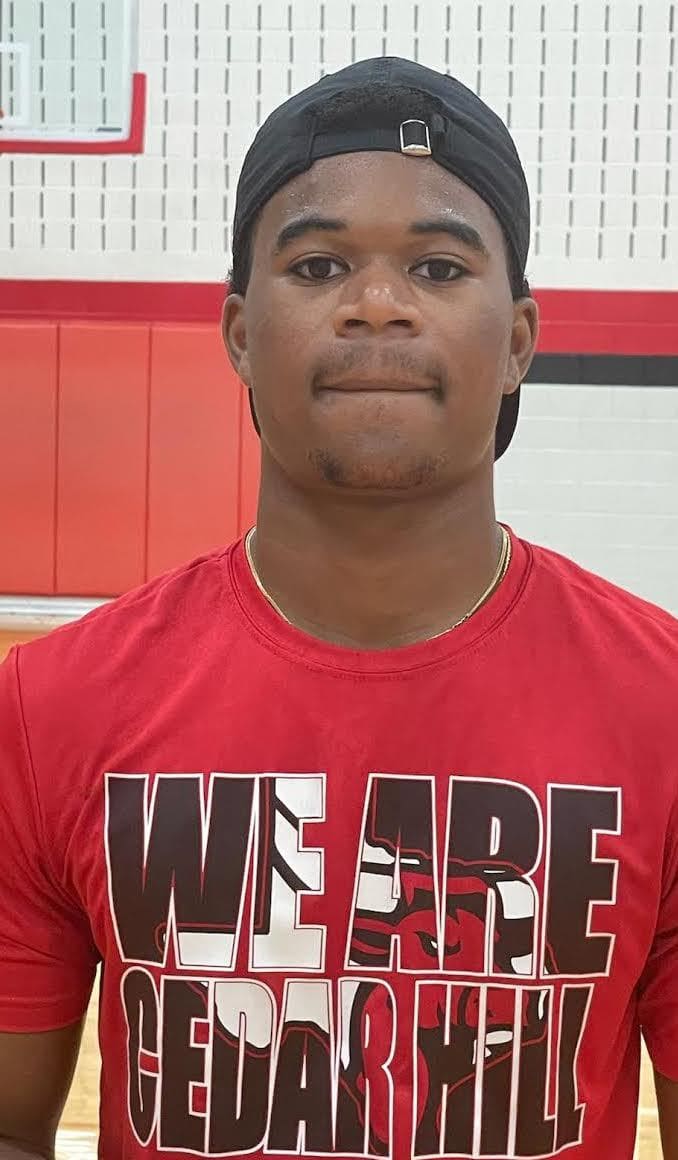 Rainey’s Choice Takes Him To A 2nd State Championship

(CEDAR HILL, TEXAS) Brian Rainey wasn’t sure if he was going to compete in his final season in Track & Field this spring.

Due to the COVID-19 Pandemic, the Cedar Hill High School Football Team’s season concluded in the UIL Class 6A Division II State Championship game in mid-January, in Arlington.

Rainey is glad that his friends convinced him to continue competing in his second varsity sport.

Because he chose to compete, he’s headed to his second State Championship in less than four months.

Rainey, who was a starting wide receiver on the state runner-up football team, runs the third leg on the Cedar Hill Track & Field Team’s 4×100 Meter Relay, which enters the UIL Class 6A State Meet Championship in Austin, this Saturday, with the second-best time (41.5 seconds). The relay will start at 5 p.m. at the University of Texas’ Mike A. Myers Stadium. Earlier in the season, they ran a 40.66.

“It’s amazing and a blessing to compete at the State level in two sports,” Rainey said.

His teammates are fellow seniors Kaleb Green, Diallo Good and DaCorey Ware. It is a remarkable opportunity, especially considering that the State Meet was canceled last season due to COVID-19.

‘Best days are Ahead of Him’

Rainey has signed to play football at Trinity University in San Antonio. A two-year varsity player, he led the Longhorns in receptions with 48 and was one of four CHHS receivers with more than 480 receiving yards (he had 481 yards). Rainey was also one of five Longhorns to catch five or more touchdowns.

“Rainey has always been a competitive kid,” Benjamin said. “He pays attention to detail. A lot of things you look for in a good athlete, you get from him. His best days are ahead of him. The way he approaches practice and games, he’ll have a lot to offer when he heads off to Trinity.”

Rainey , who ranks in the Top 25 percent of the Senior Class at Cedar Hill High School, appreciates Benjamin as well.

“Coach Benjamin took good care of the receivers, and he’s an amazing guy,” Rainey said. “He taught us a lot about blocking, route running and catching.”

Rainey chose Trinity, which competes in the NCAA Division III Southern Athletic Association, for its academics. He plans to study Business Management/Marketing and hopes to secure internships that will lead to long term achievements. The Tigers will open the season on September 4 vs. McMurry University.

Through athletics, Rainey has learned about resilience and keeping even keel. One example was the spectacular Regional Championship Game at Globe Life Park in Arlington.

Rainey caught a touchdown pass from Kaidon Salter in the second quarter and later in the game, fumbled in the end zone – which was just the second fumble of his entire career.

Through both the highs and lows of football, he kept his confidence and trust in his teammates. The Longhorns went on to win that game – over Rockwall Heath – 27-24 in overtime – and to play in two additional postseason games in the month of January.

“I knew the defense had our backs, and they did,” Rainey said.

When it comes to track, Rainey and his relay teammates are ready to leave an exclamation point for their time as Cedar Hill Longhorns.

“We’re a family – we have a different bond than any other track team in this area,” Rainey said.