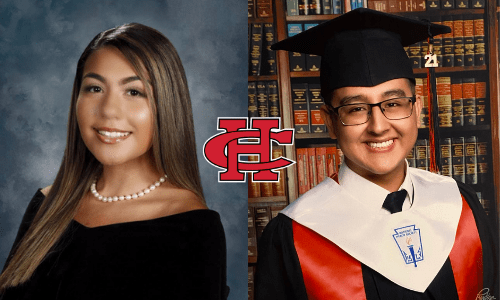 The scholarship provides tuition and fees for up to eight consecutive semesters, which is a value of close to a quarter million dollars. Two hundred scholars from throughout Dallas County applied for the scholarship, and it was awarded to just five percent of those applicants.

“Cedar Hill ISD is extremely proud of Ms. Hernandez and Mr. Garza,” Cedar Hill ISD Superintendent Dr. Gerald Hudson said. “Their commitment to academic excellence is unwavering, and their contributions to the culture and success of their respective campuses is unrivaled.”

The scholarship application included a quote from Retired U.S. Army General Colin Powell – “There is no secret to success. It is the result of preparation, hard work and learning from failure.”

Applicants were asked to provide examples where their lives and past experiences were reflected in this quote.

Hernandez, the top-ranked academic scholar in the Cedar Hill High School Class of 2021, shared her experiences from elementary school to present day.

“I had an endless string of trials that could have inhibited my academic success,” Hernandez said. “I had an intrinsic sense of motivation. I have a good work ethic, and there’s nothing I can’t do. I found myself through music and social connections. I realized I was a people helper, not a people pleaser.”

Although she was content with the essay that she submitted, Hernandez figured that earning the scholarship was a long shot.

“So many kids applied – I thought ‘what are the chances?” Hernandez said. “Then, they sent me an email stating that I was a finalist.”

“There are a lot of networking opportunities at SMU. It felt like home, and I can express my sense of competitiveness there, Hernandez said.

Hernandez, who will enter SMU with enough credits to be a sophomore, said she’ll double major in Finance/Asset Management and Music/Music Education.

“Music gives me a sense of peace and reminds me of home,” Hernandez said.

She served as President of the Senior Class, the Business Professionals of America (BPA) and the Choir at Cedar Hill. Her goal is to start a financial firm and to provide financial literacy to high school scholars.

“We are so proud of Emma and all that she has accomplished,” CHHS Assistant Choir Director Chandler Renshaw said. “We know that she will continue to make Cedar Hill Choir proud in all of her future endeavors.”

“I was fortunate enough to be Emma’s principal at Plummer Elementary and now at CHHS,” Cedar Hill High School Principal Jason Miller said. “She has always been an exceptional scholar who is passionate, well versed, and focused on her goals. I have no doubt that she will continue to show that same tenacity at SMU!”

One of The Top 10 Scholars At Collegiate

Garza, who is one of the Top 10 scholars at Collegiate, penned his essay about struggling in an Advanced Placement (AP) class as a freshman and then adjusting to succeed in AP courses.

He appreciated the “loving community that cares about each scholar individually” at Cedar Hill ISD, which is why he decided to keep attending CHISD even after his family moved to Ellis County.

One of the defining moments in Garza’s life came when he was a 5 year old Kindergarten Scholar at High Pointe Elementary on January 20, 2009.

The class watched the first inauguration of President Barack Obama. While many of his classmates appreciated the historic nature of the moment, Garza decided then and there that he would become involved in politics.

“I saw how much of an impact that elected officials have on our society,” Garza said.

Garza originally hoped to attend the University of Texas-Austin because of its proximity to the Texas State Capitol, but he was drawn to SMU through a “Future Friday” Seminar.

As the Senior Class President and National Honor Society Chapter President, Garza had an opportunity to fundraise for a Senior Prom – which was a challenge, due to the ongoing COVID-19 Pandemic.

Leadership During the Pandemic

Collegiate Dean Benjamin Hairgrove was impressed with Garza’s leadership during this challenging time.

“He has tried to do the best possible job of leading his class during the Pandemic,” Hairgrove said. “It has taken creativity and drive on his part, and he has not let up.”

Garza said he’d like to run for elected office at some point in the future.

“I would love to run for public office someday, but I would be content being on television or working on a campaign,” said Garza, who plans on attending law school after college.

Garza will graduate from Collegiate with an Associate’s Degree and enough college credits to start SMU as a sophomore or junior.

“Jacob is an amazing scholar who always looks to help others,” Collegiate Chancellor Heath Koenig said. “He is a true leader in every sense of the world. I am so proud of what he has accomplished and will accomplish through pride, purpose and perseverance.”

He already has a head start politically, having worked on a school board campaign in Lancaster when he was in elementary school. He’s met US President Joe Biden as well as US Senators Ted Cruz and Amy Klobuchar, US Congresswoman Eddie Bernice Johnson and Texas State Senator Royce West.

Along the way, he’s learned about leadership.

“Leadership is about having the best interest of the group and not just yourself,” Garza said.