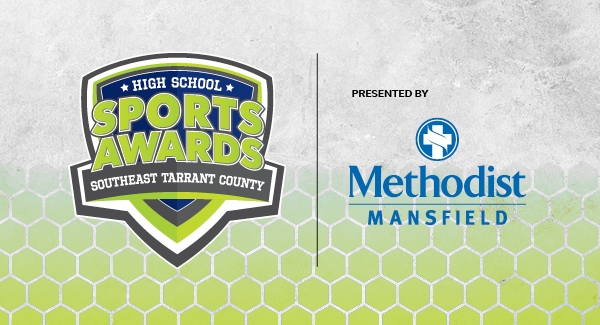 Please use the hashtag #TARRANTCOHSSA, #TEXASHSSA and #USATODAYHSSA for a chance to be featured on the social media feeds on the event websites and be a part of the online conversation.

MANSFIELD, Texas – The Southeast Tarrant County High School Sports Awards, presented by Methodist Mansfield Medical Center, is a nine-month student athlete recognition program that culminates in a star-studded, on-demand broadcast show, featuring the biggest names in professional sports and the top student athletes from Southeast Tarrant County. Honorees for 21 state sanctioned sports will be announced throughout the year on the event website at sportsawards.usatoday.com/tarrantcounty.

The awards show will be free to watch on any smartphone or computer thanks to presenting sponsor, Methodist Mansfield Medical Center. It is scheduled to premiere at 6 p.m. CDT on June 17, 2021. Honorees should register on the show website to reserve their complimentary athlete gift box, which is scheduled to arrive approximately one week prior to the show.

Registrations are also used to send out awards for winners following the show.

Visit sportsawards.usatoday.com/tarrantcounty to sign up for updates to keep up with show updates, honoree selections, presenter announcements and more.

This program is part of the USA TODAY High School Sports Awards, the largest high school sports recognition program in the country. Event organizers had hoped to plan for an in person event for 2021, but concern for the continued safety and health of students and their families with the ongoing spread of COVID-19, led to a decision to produce a streaming awards show.

“Due to the various county, state and regional variations in protection against the spread of the virus, as well as our own commitment to safety, we couldn’t confidently plan for live events across the country in 2021,” said Crystal Costa, Gannett’s event director for the high school sports award series. “We do hope and plan to be returning to our ESPY-style high school awards shows in person in 2022.”

Along with the chance to be recognized in this regional awards show, top student athletes may also be featured in the Texas High School Sports awards show. The state honorees will also be announced throughout the year, and these honorees, along with winners in each category will be revealed during the Texas High School Sports awards on-demand broadcast, premiering at 6 p.m. CDT on July 15 on sportsawards.usatoday.com/texas.

Texas Athlete of the Year Winners

Visit the website to sign up for updates and honoree selections throughout the year.
Finally, the most elite high school athletes, coaches and teams from across the U.S will be featured in the inaugural USA TODAY High School Sports Awards show. The Texas athlete of the year winners will be national honorees in cross country, tennis, golf, soccer, volleyball, football, hockey, swimming and diving, lacrosse, wrestling, basketball, softball, track and field, baseball and gymnastics.

The USA TODAY High School Sports Awards show, which will be televised and available for streaming in early August, will showcase those honorees from each state, announce the top three in the country and then name the athlete of the year in each sport. Viewers will also see awards for the freshman athlete of the year, the play of the year, the nation’s top male and female athlete, and many other premier awards for high school student athletes.

Please use the hashtag #TARRANTCOHSSA, #TEXASHSSA and #USATODAYHSSA for a chance to be featured on the social media feeds on the event websites and be a part of the online conversation.

Gannett owns and operates the largest high school athlete recognition program in the U.S.
Viewers can find honorees from various regions, including the national honorees and winners at .