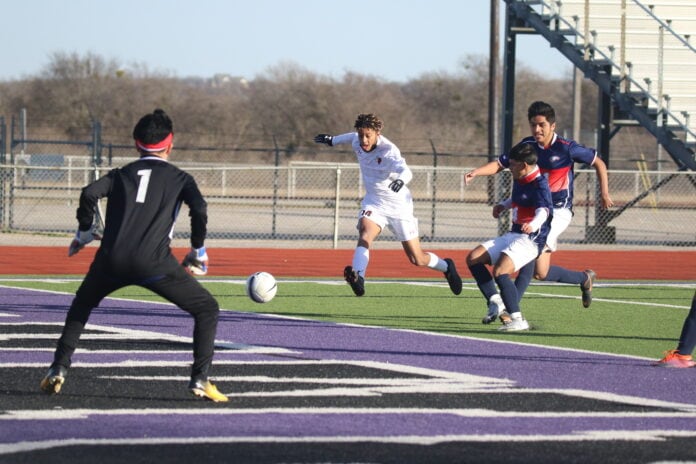 Working Towards The Playoffs

(CEDAR HILL, TEXAS) Cedar Hill head boys soccer coach Jeff Keating said the Longhorns are in a position to qualify for the playoffs for the first time since 2013.

“We have a lot of kids with ball skills, a lot of strong passing and dribbling,” Keating said.

Keating was a lifelong DeSoto Eagle until last summer. He graduated from DHS in 2008 and went on to coach there for seven years, including five years as head coach.

Keating traded Green & Gold for Red & Black over the summer, after receiving a phone call from outgoing head coach Thomas McNamara, who is now an assistant coach at Allen, encouraging him to apply for the position.

“He called me and said it’s a good program and a good situation,” Keating said. “The Cedar Hill-DeSoto matches have always been really close.”

Keating was pleasantly surprised with the interest in the program. He said 85 scholars – both from Cedar Hill and Collegiate high schools – tried out for the team. There will be a total of 40 players, between the varsity and junior varsity levels.

Many Seniors Are Returning

“The core of our program is back, despite graduating 10 seniors,” Keating said. “We’ll have 10 seniors on varsity. We have a lot of good players and a lot of good depth.”

“Benjamin is like a coach’s dream as far as always wanting to get better, doing everything you ask and more, Keating said. “Everyone just respects him as a leader and a player.”

Senior Anthony and junior Alec Moreno, along with sophomore Ryan Stowe and juniors Jacobo Valdez, Francisco Bernabe and Ernest Marcos Martiel are expected to be leaders this season as well.

The Longhorns open the season on January 4 at South Oak Cliff, followed by the Grapevine/Colleyville Tournament, January 6-8, which will feature several playoff teams.

Keating expects Lake Ridge and Duncanville to be the most competitive teams in District 6A-11 this season, with Cedar Hill competing with Mansfield and Waxahachie for the final two playoff spots.

Friday, February 5 will be a special day for Keating. That is when the Longhorns travel to DeSoto for the Battle of Belt Line Game.

“DeSoto will have all of the same kids, with the exception of one,” Keating said. “I don’t know what the emotion will be like, being on a different side of the matchup. Hopefully, we’ll be getting the big win.”