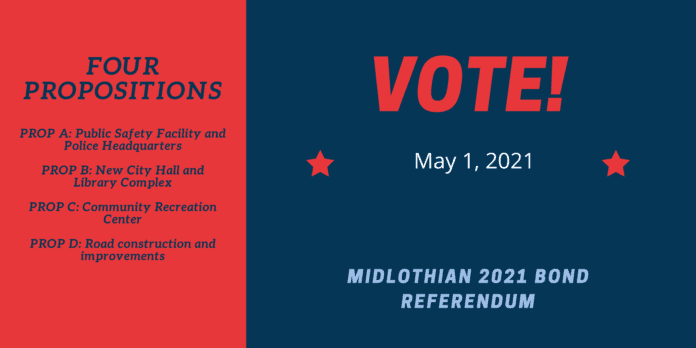 Following a poll of its 15 Board Members, the Midlothian Chamber of Commerce has announced that the organization officially supports all four propositions on the May 1st bond election. Chamber CEO Laura Terhune stated, “The Chamber Board feels it is important that Midlothian have the facilities and roads to maintain a high quality of life.” She continued, “These bond propositions will help to ensure the community is able to meet the demands of our rapid growth.”

Terhune concluded, “Midlothian residents are urged to vote in the May 1st election which will decide the races for City Council and MISD Trustees as well as the Bond Propositions.” Early voting starts on Apr 17 and runs through Apr 29 at the Midlothian Conference Center.

For more information, contact the Midlothian Chamber of Commerce at 972-723-8600.

According to a question and answer series regarding the bond referendum Midlothian residents will not see a tax-rate increase with the passage of the bond package. Instead it was noted the money will be financed with the existing tax base and the future growth of the community.