After getting an invitation to a Kentucky Derby Progressive Brunch at AC Hotel in Downtown Fort Worth, I had to do some fast talking to convince my husband to join me and a group of bloggers (all women) at this festive event. The invitation suggested wearing our Big Derby-style Hats, so he pointed out “that obviously means women, not me.”

But we both love Fort Worth, and he was also intrigued at a chance to tour the host hotel in downtown Fort Worth. The AC Hotel Downtown Fort Worth is an upscale new Marriott, centrally located just steps away from Sundance Square, Bass Hall, and the convention center. After I promised he could wear his favorite Ducks Unlimited cap instead of a big hat, he agreed to go with me.

Upon arriving at the AC Hotel at 101 West 5th Street, we left our car with a valet parker and entered the downstairs foyer. We were greeted there by friendly staff people (including the GM in a colorful jacket), and a Mint Julip in honor of Derby Day. Then we took an elevator to the reception area on the second floor, which also features a well-stocked bar, convenience store, and lounge. Plus great people watching from the windows!

Since we planned to stay that night, we left our bag with the helpful lady at the front desk before taking an elevator up to the 16th floor. The progressive Derby party was in full swing in one of the meeting rooms. Several tables held ladies in hats nibbling appetizers, sipping their Mint Julips, and visiting with friends.

Just as I had expected, my reluctant spouse ended up having more fun than anyone at the event. As a retired school teacher and a born story teller, he was in his element with all those young bloggers. He quickly forgot about being the only man there, and at one point even agreed to don a Fedora and pose with the hat-wearing group. 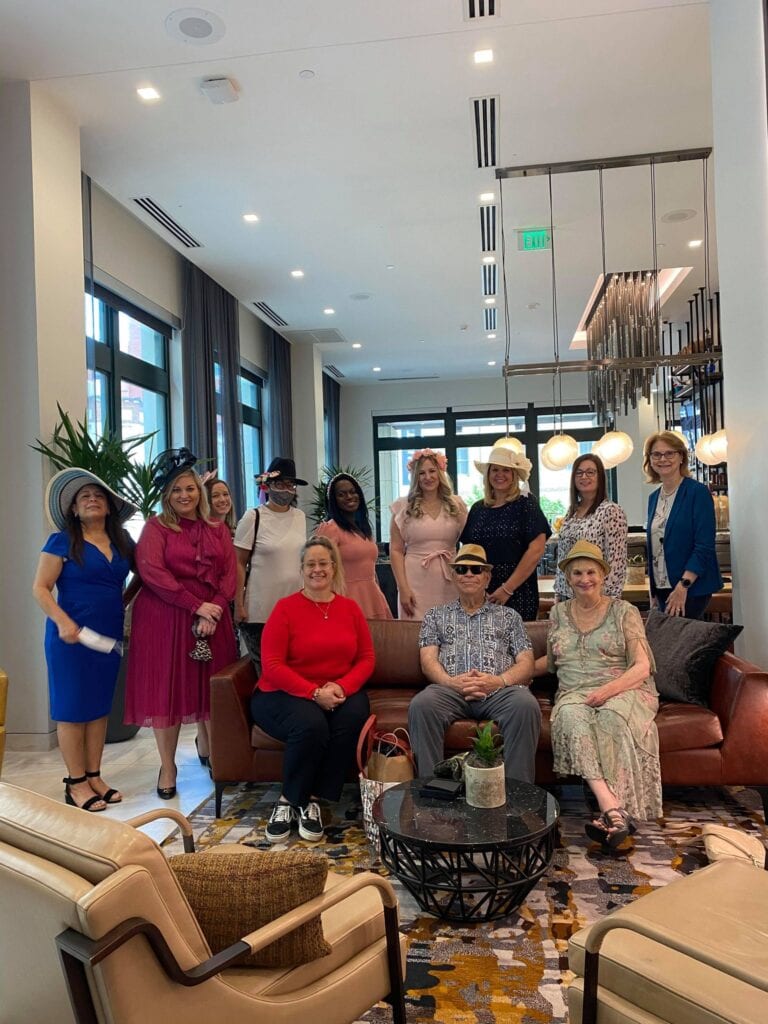 We toured the hotel with Sales & Marketing Director Jillian Lehmann and catering director Jennifer VanZandt. Both ladies were elegantly attired in Kentucky Derby style hats for this special occasion. We enjoyed a progressive brunch along the way, ranging from salads to entrée to dessert. My favorite dishes were the shrimp deviled eggs, a unique spin on one of my favorites, and the lobster bisque shooters.

All of the rooms were modern and elegant, especially the corner suites. We were all (except maybe my husband) especially interested in seeing the honeymoon suite. There’s even a suite set up for Bachelorette parties. Fort Worth is a great place for a Bachelorette party, I remember having mine there some years ago. I can’t remember which hotel, but I do recall stops at Joe T. Garcia’s and Billy Bob’s Texas.

We were also treated to a whisky tasting in AC Hotel’s second floor lounge area, along with dessert. Tony Formby, managing partner/owner of Acre Distilling, Fort Worth’s award-winning distillery, presided over the tasting. After saying our goodbyes to most of the bloggers and our gracious hosts, my husband and I headed to our room for a nap before exploring Sundance Square and other downtown attractions that evening.

We joined blogger Brittany Ryan, aka The Jet Set Blonde, for a hatless stroll around Sundance Square. The three of us had reservations for dinner at nearby Reata Restaurant, thanks to Visit Fort Worth. The Reata on Sundance Square is one of the best restaurants in Fort Worth (or anywhere in Texas). The rooftop terrace offers a terrific view of Sundance Square, and is a very popular spot for happy hour crowds.

Reata’s extensive menu, like its décor, reflects its Spanish influence. Reata is Spanish for rope, and was named for the ranch in “Giant” (the 1950 film that Texans either love or hate). The restaurants (including one in Alpine) have been favorite dining destinations for Texans for several decades, and their food and service shows no signs of slowing. My Jalapeno and Cilantro soup ($6) was so good, I almost canceled my entrée and ordered a larger bowl of the soup. I’m glad I didn’t act on that impulse, since my entrée of Chicken Chile Rellenos with roasted corn chowder ($19) was equally delicious.

My husband was just as happy with his CFS, which was perfectly cooked and seasoned and featured a Texas-sized slab of steak ($19). For a shared dessert, we ordered their signature Dessert Tacos with caramelized bananas and chocolate gravy, ($8) which was every bit as decadent as it looked.

While the dinner menu might be a little pricey for every day dining, it’s perfect for any special occasion like Mother’s Day, birthdays, or an anniversary. As I reminded my husband, I’m a mom, and Reata has a special Mother’s Day brunch menu in May. Plus, we both have birthdays in June, and an anniversary in August!