GLENN HEIGHTS – It has been a longer road than some expected to get close to Glenn Heights’ Mayor Harry Garrett’s vision for a social justice mural.

The artist, who was introduced to council last month will return to offer up three mural renderings at the meeting scheduled for September 15. One of the three renderings was introduced at an August 11 council meeting. There was some controversy regarding that rendering.

Should the money have gone to other projects?

The council commissioned the social justice art project for the city at the July meeting by a 5-2 vote.

Glenn Heights Mayor Harry Garrett introduced the idea saying “I think it is important not just to say what we are about, but also that we demonstrate some action,” he said. “I want to see a mural that is painted on the street … Black Lives Matter.  I think that it is important for us to stand in solidarity for those who have been protesting and are continuing to protest and will protest in the future on injustice.”

Both council members who voted against; Place 5 Shaunte Allen and Place 2 Emma Ipaye said no to the project. Allen was very specific that unless the mural is painted in front of Discount Auto Care she did not think the money should be spent in that manner.

“We have other projects we can spend the money on,” she said.

Ipaye concurred “I don’t see how we can justify spending money for this while people are begging for their streets to be fixed and there are other projects so I will go with Ms. Allen.”

Mayor Garrett had asked each councilmember to make their travel and training budget money available to pay for the project.

Each council member agreed to that request.

“My desire is to make this project happen sooner than later,” the mayor said. “I don’t know how much effect if we delay the project until next year.”

Artist Carl Hess’ Social Justice Art Project renderings were presented to the city council in August. Hess is an artist making a name for himself within the realm of Realism artwork with an MA in Art Education. His idea was a mural spotlighting 17 recognizable faces from the Black Lives Matter movement.

Both Ipaye and Place 4 Ron Adams commented on the mural rendering Hess brought to the meeting.

Ron Adams was asked to speak on behalf of his questions regarding the art that is being expressed in Hess’ Black Lives Matter rendering.

“I think all of you know me well enough to know that Black Lives Matter,” Adams began.

Adams said he had reservations about the rendering because of what happened at the Glenn Heights Discount Auto Care several months ago.

“We saw what happened at the auto place that day.  Everything is going well and then Black Lives Matter people start showing up and it gets out of hand. I am not offended by the term Black Lives Matter whatsoever. I just do not like the connotation of being in support of the organization.”

Adams said he did not believe the organization had done anything for the black community.

Debate Over The Mural

Garrett said he felt that Adams was making a “gross mischaracterization of that organization.”

He went on to add “It takes a certain sensitivity to understand why certain things are important to some people and not so much to others. I think that is where it takes some give and take, if you will, because you don’t know and you have not experienced it; so you might ought to give more consideration to those who have had to go through what we have had to go through. This will make you understand how that affects us and how we feel about it and not so much how you feel. I think in this instance, I would defer to those around you who have a different sensitivity in regard to what that means.”

Adams, who was the councilmember who made the motion in support of the mural in July said “My motion in the last meeting – if it was to put Black Lives Matter on the building or the road I would not have made the motion.”

She said there are some people who have turned it into something different.

A Mural That Brings The City Together

“At this point because of the multiplicity of interpretations it is not bringing people together,” she said “I would like to see a mural that would bring everybody together no matter who you are.”

A final decision on the artwork

After much discussion, Hess was asked to create two additional artwork options including the rendering he presented in August. The picture is the first rendering and is NOT the final approved design.

It was also decided to place the approved mural on the side of a building instead of painting it on the street.

As for the final mural design presentation, that will be made next Tuesday. And, as Mayor Garrett said, the project is timely and should be completed now, not sometime in the future. 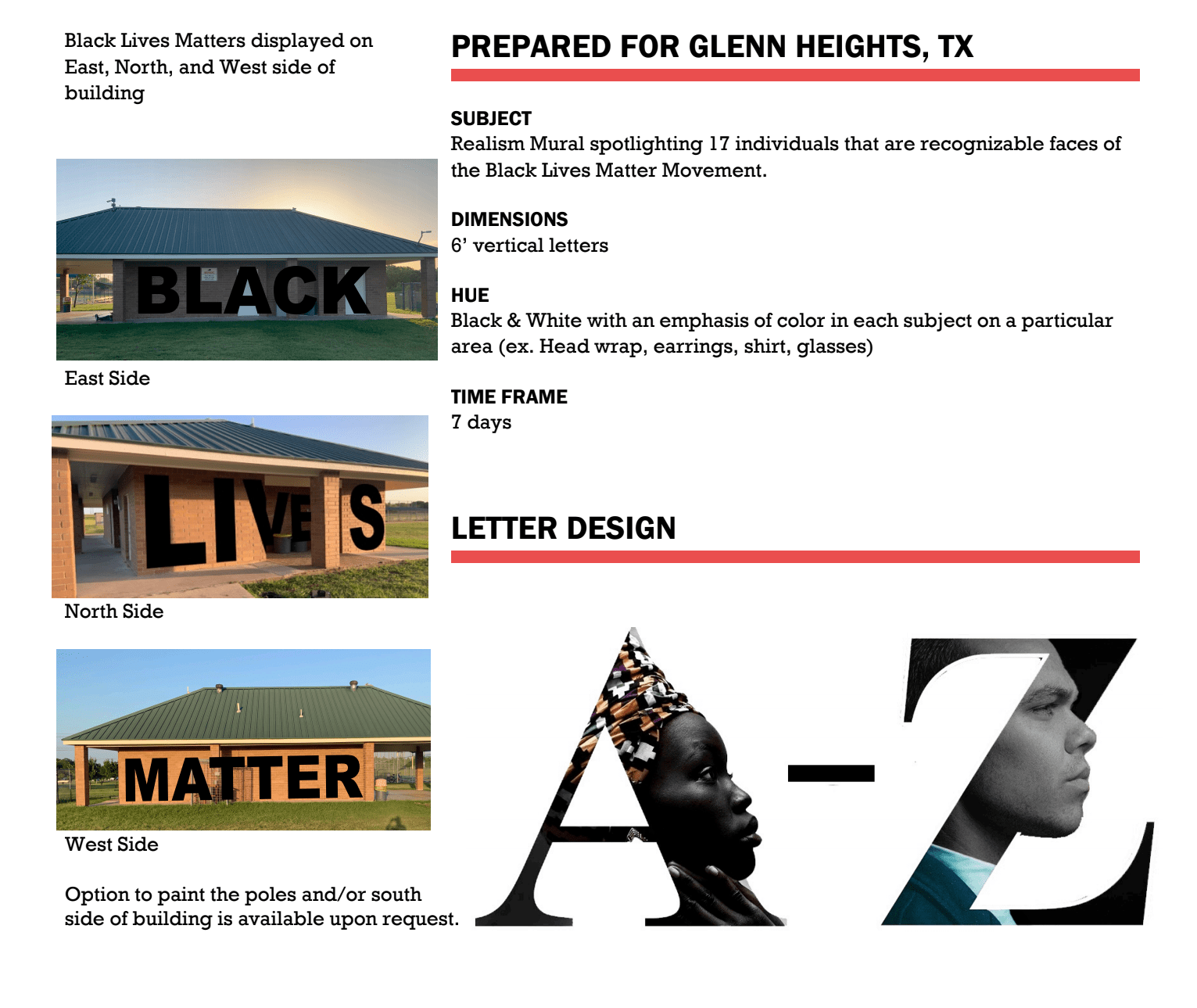