DeSoto Police are awaiting the return of a felony suspect captured by Massachusetts State Police at Boston’s Logan International Airport on September 5th as she attempted to board a flight to Istanbul, Turkey. DeSoto Police had determined as far back as late July that the suspect, 32-year-old CAMILIA SHENE JOHNSON, a/k/a CAMILIA JOHNSON IBRAHIM, B/F, had been suspected of impersonating a lawyer and maintained an active but unlawful law practice based in Uptown Dallas. Massachusetts State Police were enforcing a felony warrant secured by DeSoto Police who had been investigating the suspect’s attempt to provide legal services to a skeptical DeSoto citizen who turned over corroborating evidence to DeSoto police.

DeSoto Police launched an investigation of the suspect on July 17, 2020, after a citizen came forward and informed them that many of the legal actions being proposed to them by the suspect were not actually the law. The citizen let police know that they had even contacted the State Bar of Texas and confirmed that the suspect was not a licensed attorney in the State of Texas. Detectives then stepped in and found that Ms. Johnson has been advertising herself as a lawyer online on websites such as “findalawyer.com” and others in the Dallas/Fort Worth metroplex.  She was also found to be operating an unlawful law firm-like practice under the business name of “Ibrahim Johnson & Associates” and meeting with clients in an Uptown Dallas office. DeSoto Detectives soon confirmed that the suspect was not a lawyer but was actually a convicted felon.

Because of this, the 3rd-degree felony charges against her of “Falsely Holding Oneself out as a Lawyer” will be upgraded to a first-degree felony which is punishable by 25 years to life under the State of Texas habitual offender laws.

Prior to her arrest at Logan Airport, detectives received a call from a Flower Mound, Texas resident to say that she too had who also identified the offender as a person who had provided legal services for her only to find out later she was not a lawyer. DeSoto police believe there are possibly other victims in the metroplex and encourage anyone who believes that they have been victimized to contact the police department where they live as soon as possible to file a police report as several legal deadlines may be approaching fast.

When additional victims make a report to their local police department, the DeSoto Police Department report number DE2007211 and the Dallas County case number F20-21062 should be provided to the Officer taking the report.

Here is mug shot of the Offender from her arrest on September 5, 2020: 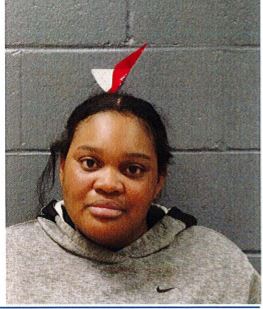