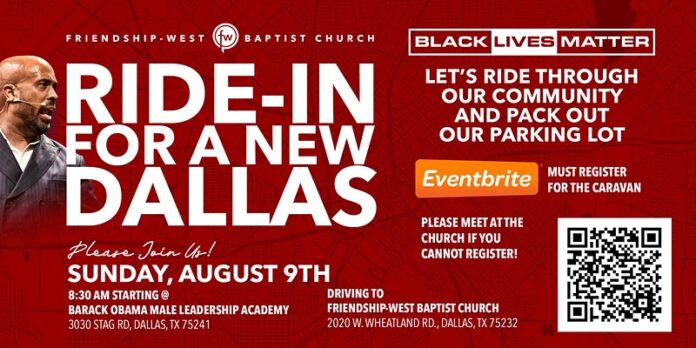 DALLAS, August 8, 2020 – Tomorrow, August 9, 2020 there will be a Black Lives Matter “Ride-In for a New Dallas.” Starting at 8:30 a.m. at the Barack Obama Male Leadership Academy (3030 Stag Road, Dallas, Texas 75241), the caravan will drive through Oak Cliff and end at Friendship-West Baptist Church (2020 W. Wheatland Road, Dallas, TX 75232). The event is open to public supporters and those who plan to participate in the caravan are asked to register via Eventbrite. Others who wish to support are encouraged to meet in the church parking lot at 9:45 a.m.

The Black Lives Matter Ride-In is a demonstration of solidarity and support for Friendship-West and the Oak Cliff community, following an unauthorized “Back the Blue Cruise” rally held at the church last Sunday. It will also serve as a call-to-action where volunteers will be registering voters, recruiting election poll workers, and encouraging participation in the 2020 Census. Attendees will also hear from Dr. Frederick D. Haynes, senior pastor of Friendship-West Baptist Church. He will set the record straight on the intimidation attacks against the church, and share information on what he and other leaders are calling for from the City of Dallas, regarding public safety and positive community change.

A Tribute To The Freedom Riders and Sit In Movements

Dr. Frederick Haynes wants to make it clear that the “Back the Blue Cruise” was not authorized by him, or any staff members, and was a targeted attack. “Last week, the sacred space of the Black community, the Black Church, was invaded by many with bad intentions, but what they intended for evil we will transform for the good of the cause of justice,” said Dr. Haynes. “These disUnited States are in the midst of a reckoning, which is an opportunity for the next reconstruction of this nation. Our “Ride-in” is a tribute to the freedom riders and the sit-in movements of the sixties. Join us as we take a ride for freedom and justice.”

Dr. Haynes also hopes to shine a national spotlight on what happened in hopes of protecting other Black churches around the country. In addition to the incident at Friendship-West Baptist Church, there was an arson attempt on The Way Christian Center in Berkeley, California, less than 12 hours after they put up a large Black Lives Matter banner.

Despite the recent incident, Dr. Frederick Haynes, known widely as “the drum major for justice,” continues to work diligently to stand up for justice and create positive change, nationally, and in the Dallas-Ft. Worth community. In Southern Dallas, which lacks many resources for its residents, his vision is for a “new” Dallas where housing, gainful employment, fresh produce, clean air, safe neighborhoods, quality healthcare and access to sustainable resources, are available for all Dallas residents.

Dr. Haynes is also a leader in the efforts calling for defunding policing in our communities and recommends reallocating no less than 60% of the current public safety budget to redress the decades-long history of targeted and intentional economic disenfranchisement, terrorism, and incarceration unleashed on Black people. This has been done, successfully, in San Francisco and Los Angeles, and Dr. Haynes believes the same can be achieved in Dallas with the hope of positioning the city as a national model for other cities to follow.

Dr. Haynes believes that change is the best way forward. He is a part of the Our City Our Future coalition, which created a list of 10 demands that they believe will start to move the city of Dallas forward from the archaic practices of systemic racism and white supremacy, and provide viable solutions for the people most affected by policing and poverty. Among that list of demands includes changes in the first response to calls that involve people with mental health challenges, firing police officers with multiple complaints of excessive force, and restricting the use of deadly force by officers.