GLENN HEIGHTS—It was a clear win in Glenn Heights this weekend. When the unofficial results from Saturday’s Special Election for Glenn Heights’ new mayor were tallied from both Dallas and Ellis Counties former city council member Harry Garrett came away victorious.

When the polls closed Garrett easily took the seat with a total of 250 votes combined from both counties. His opponent Sheena Morgan came away with a total of 135 votes.

Garrett said he wanted to thank the citizens of Glenn Heights, “For the confidence that you have shown in me by electing me as mayor. To the members of the city council, Police and Firefighters Associations and others that have endorsed me, thank you so very much.”

Garrett also said Sunday, “There is no doubt in my mind that Glenn Heights’ best days are ahead. I trust that each one of our council members, city manager and staff share in this belief.”

It was a long walk to the finish line for Garrett as he was originally up against four opponents. When the first special election was behind him, Garrett came away with more votes than the other candidates but needed to win by more than 50% of the vote to take the seat. 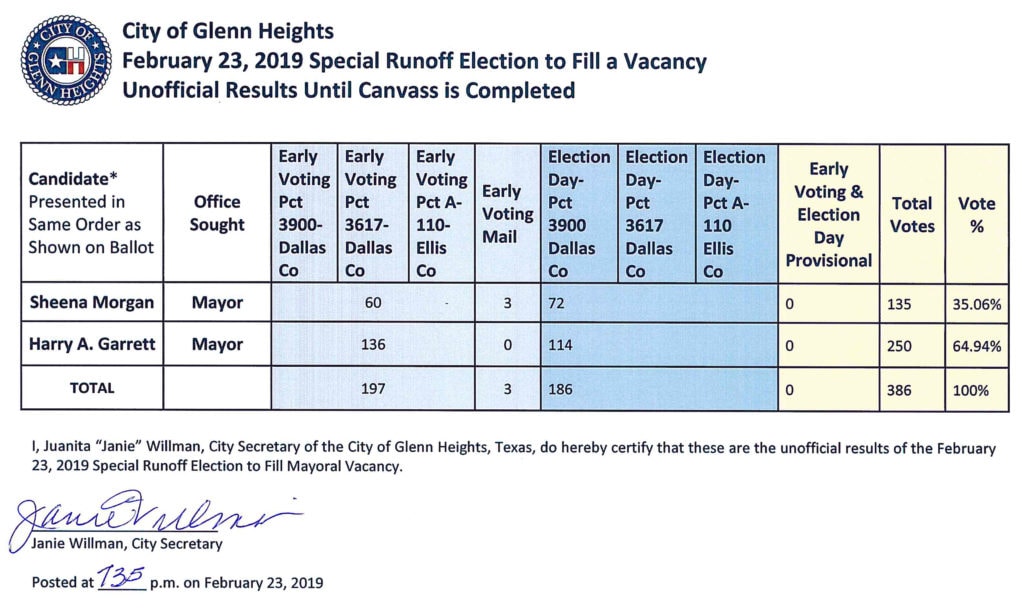 Morgan was second behind Garrett and so the Special Mayoral Run-off election was held.

The mayoral seat became open when former Mayor Tate was removed in a 5 – 1 vote of the city council members in the fall.

“Together with you the citizens of Glenn Heights we will work together to address our city’s challenges. We will be forward thinking and continue to keep our city a safe place to live,” Garrett concluded.