The Fun, Informative Way to Get A Feel For Rome

There is so much to see and do in Rome, it is hard to respond when asked what was our favorite activity. After all, we toured the Colosseum, the Vatican, tossed coins in the Trevi Fountain, visited the Basilica Santa Maria, the Villa Farnesina, the National Academy, Rome’s Botanical Gardens and so much more. There is so much to do, I’m not sure if we could have done everything we wanted had we been able to spend the entire summer!

But, the one activity that made so much of that happen was the Vespa Sidecar Tour of Rome. It was the highlight of our entire stay in Rome. Not just because it was a blast zipping around the city on a Vespa, but because our guide Luca was so knowledgeable. He took us to so many attractions, giving us so many facts about the Eternal City it made us want to visit all the other sites in far more depth. Bonus: our tired feet got a little rest while we rolled through the narrow alleys and covered so much ground.

Luca and his sidecar driving companion, Massimo, spent an entire afternoon with us driving past major attractions, driving slowly and even stopping when warranted for further inspection and information. The Vespa sidecars used by Vespa Sidecar Tour are custom built, one of a kind. There’s no other sidecar built with the latest Vespa GT300.

Perhaps the single most interesting site Luca took us was the Pantheon. We stopped and Luca took us inside providing a great deal of insight on its history. Travel tip: Reservations for the Pantheon are required on Saturdays, Sundays and public holidays.

The Pantheon was dedicated during the reign of Hadrian in the year 125 AD. It had originally been built in 27 AD by Marcus Agrippa to celebrate his victory over Anthony and Cleopatra. It was built at that time as a temple for all of the Roman gods. Inside the Pantheon, Luca told us how the floors had been built so well they have endured and remain beautiful to this day.

We saw a great deal of art from the Renaissance inside the Pantheon.

One striking feature of the Rotunda in the Pantheon is that it is its mathematically perfect proportions, making it symmetrical at 142 feet high and 142 feet in circumference. The dome opening is 71 feet above the floor.

Luca took a photo of McKenzie, Hunter and I in the exact center pointing up toward the top center of the dome. He pointed out how much of a marvel it was that such a structure could be built with no modern equipment such as we have today and survive in perfect condition after 1800 years. There is a 27 foot opening at the top of the dome which allows light to enter and illuminate the entire building during daylight hours.

One interesting fact about the Pantheon is it was converted to a church in the year 609 AD and remains a church to this day.

Although we spent a great deal of time visiting the Pantheon, there were many other sites Luca took us on his Vespa Sidecar tour of Rome. One was the famous “Spanish Steps,” which Luca explained to us were not Spanish at all, in spite of their name. The steps were actually built by Italians with funds provided by a French diplomat, Étienne Gueffier. The 135 steps, completed in 1735, took two years to build and are dedicated to the Holy Trinity, the Father, the Son and the Holy Spirit.

The square where the steps are is named the Piazza di Spagna (Spanish Plaza) and is the home of the Spanish Embassy (the Monaldeschi Palace). Other than this, Luca was not able to provide further explanation as to why they have always been called the “Spanish Steps” rather than using some other nomenclature, whether Italian or French.

There is no tour of Rome that would be complete without visiting the Trevi Fountain. Although people toss coins into the fountain for luck, we must caution do not get in it or even put your hand of foot into the fountain. During our visit, while enjoying some famous gelato from right across the street, we witnessed some Carabinieri (Italian police) apprehend a man who had put his foot into the fountain and detain him. We do not know his ultimate fate, but in a word to the wise, we would not recommend personal contact with the water in the fountain.

Another side note, although the gelato was excellent (we did not find any gelato anyplace in Rome we did not enjoy) we would caution to be careful in choosing eating establishments close to popular tourist sites. We stopped at one of the top ten Trip Advisor restaurants for pizza near the fountain, and found it to be the worst we had sampled in Rome (the best was at Luma Bistro). 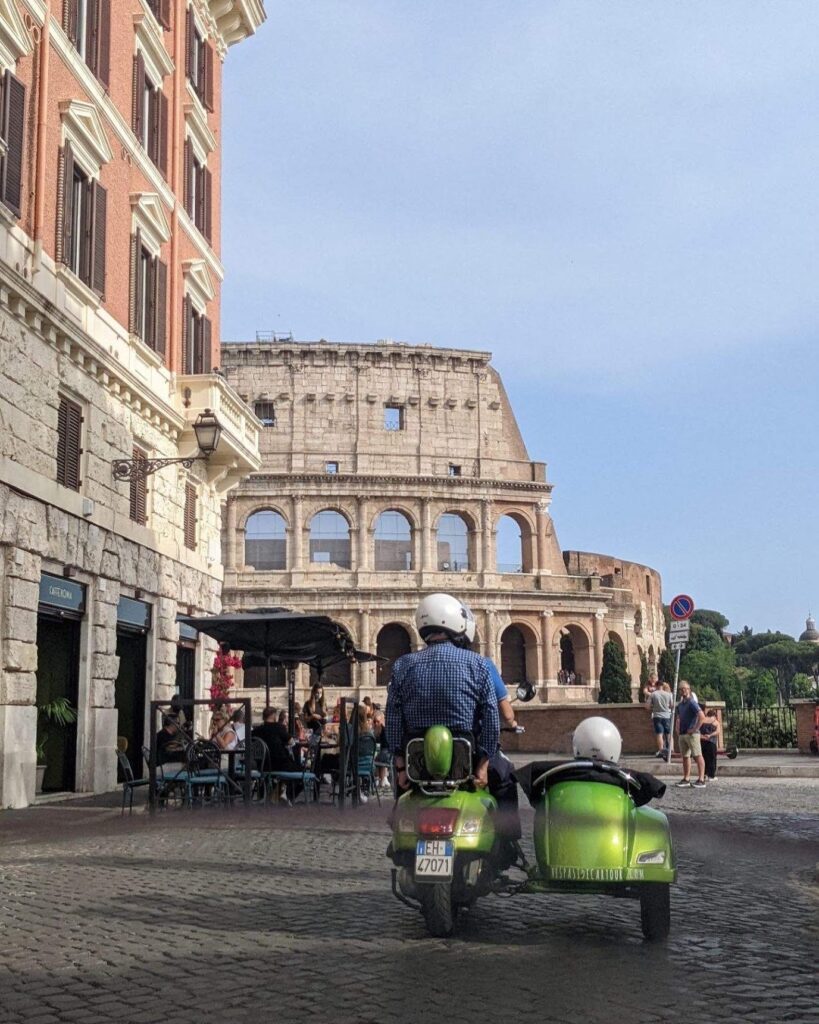 The Vespa Sidecar tour then took us to an overlook of the Colosseum, which we enjoyed immensely (more details on the Colosseum in a separate article from our guided tour there). The view looking down on it is breathtaking.

One of the final places Luca took us on our sidecar tour was atop the tallest hill in Rome, Gianicolo, (not one of the famous Seven Hills of Rome, interestingly enough).

The view of the city from the hill is astounding as is seeing the statue of Victor Emmanuel II on horseback at the top of the hill. It is located above the borough of Trastevere on the west side of the Tiber River. Trastevere is one of the most interesting and best areas of Rome to visit, with great shops and restaurants throughout.

By the time our tour was over, not only did we know a lot more about Rome’s history and attractions but we felt like we’d gained new friends.