“We need to flatten the curve…it is my recommendation that we implement a shelter in place here in Ellis County” said Dr..Leigh Nordstrom, from the Ellis County Local Health Authority. 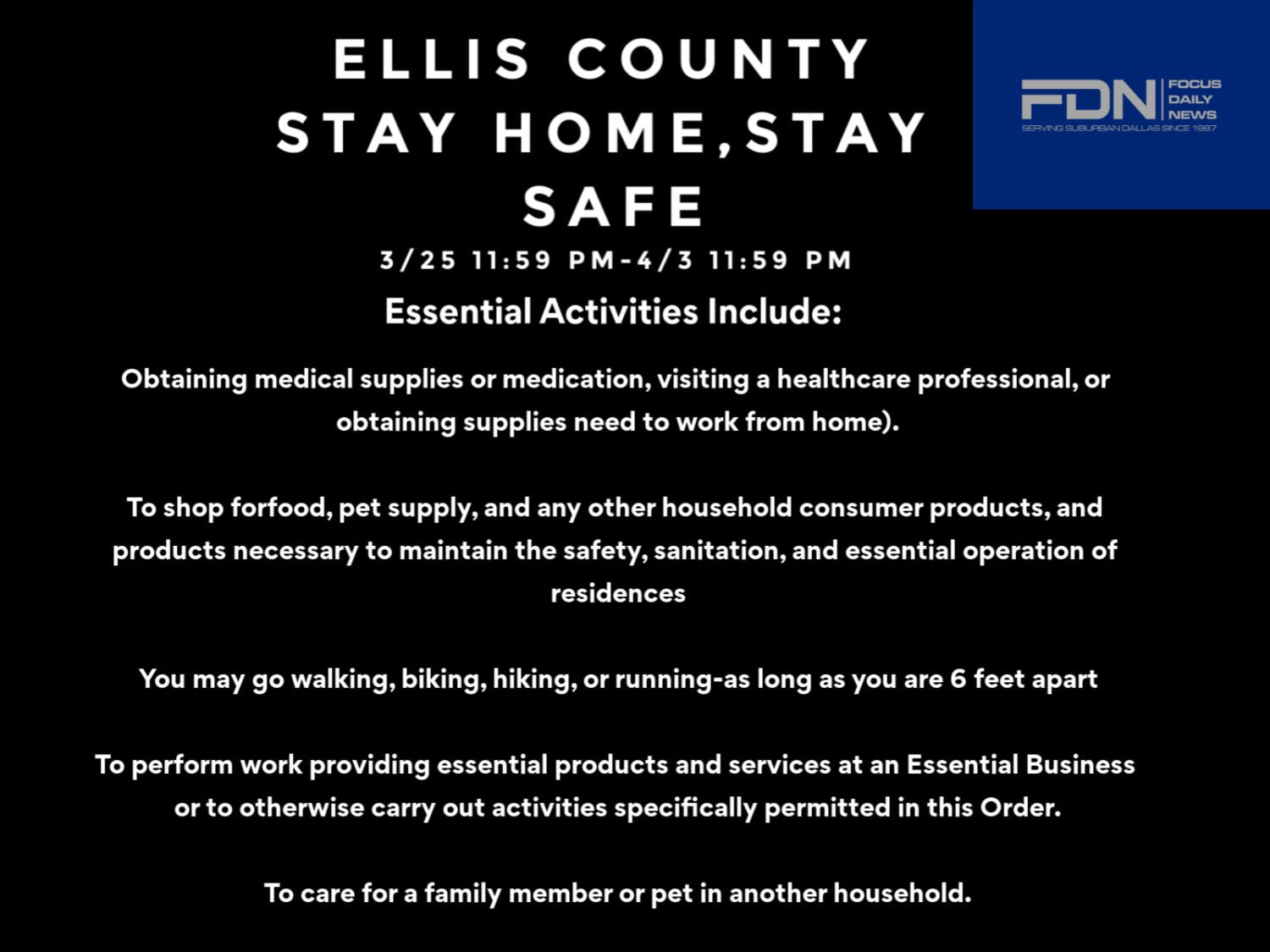 There are currently nine confirmed cases in of the COVID-19 in Ellis County, with an additional 20 persons under monitoring (PUM) as of Thursday afternoon.

The Ellis County male in hospital isolation is age unknown and is a resident of Midlothian. Another Midlothian resident is a 32-year-old male. Two other females are in home isolation, a 72-year-old Maypearl woman and a 37-year-old female resident living just outside of Ennis.

There are also two additional male cases. One is a 44-year-old man from Palmer and another male resident of Waxahachie whose age is unknown.

As for the additional two confirmed cases in Ellis County, according to the Ellis County Public Information Office the age and location of these additional two residents is not being released. Nor will they disclose whether the cases are community spread or travel related.

Local cities taking their own action

The Mayors in both the cities of Waxahachie and Red Oak decided Wednesday to extend the County’s Shelter in Place order for an additional time.

What Law Enforcement is doing to enforce the order

The Ellis County Sheriff’s Department sent out a press release on Thursday to let residents in Ellis County know what that department would be doing to enforce Judge Little’s Order.

The release stated Ellis County Sheriff Chuck Edge said at Tuesday’s Commissioner Court meeting  “This order if approved, would give Law Enforcement the authority to enforce the order. However, Deputies would continue to develop Probable Cause before taking enforcement actions against the public.”

Also,  Sheriff Edge maintains “we should all come together in this global disaster that has affected so many people. It is our obligation to maintain social distancing as directed by the guidelines set out by the CDC (Center for Disease Control and Prevention).

The Midlothian Police Department put out a message on social media. It states, “The Stay at Home order does not provide any additional authority to police officers to stop or contact motorist who are obeying motor vehicle laws. If during a contact it becomes obvious that the motorist is intentionally violating the order, officers have been instructed to explain the seriousness of our current situation and release with a warning. Motorists or individuals who are found to be intentionally and habitually violating the order could face an enforcement action.

In Tarrant County Judge Glen Whitley issued a Shelter in Place order effective until April 7, 2020 at 11:59 p.m. The Cities of Fort Worth and Arlington in Tarrant County also issued orders to residents with the same effective ending date.

As of Thursday, Tarrant County had confirmed 10 news cases for a total of 100.

Johnson County Has not Issued Orders for Residents to Stay Home

There have been no Shelter in Place or Stay Home Stay Safe orders declared in Johnson County. Johnson County Judge Roger Harmon did declare a Local State of Disaster due to public health emergency on March 23, 2020.

As of Thursday, there were three confirmed cases of COVID-19 in Johnson County and no deaths.

Collin County had six confirmed new cases including one death. Denton County has 70 cases confirmed as of Thursday, March 26, 2020.