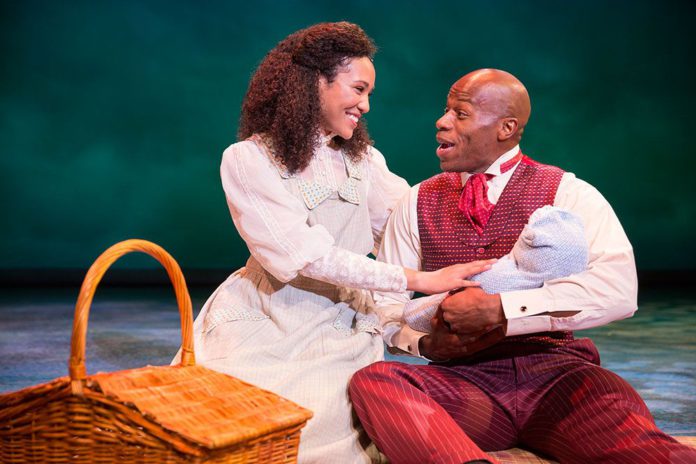 A powerful production of “Ragtime” is onstage now through June 5 at the Music Hall at Fair Park. The national tour is presented by Dallas Summer Musicals. Based on the 1975 prize-winning novel by E. L. Doctorow, “Ragtime” is the quintessential American musical. Set during the early 1900s, the award-winning musical focuses on three very different people and their families. Set during a time of great change and upheaval for the country, it’s sad to realize traces of the racial prejudices that tore the country apart then, still exist in the 21st century.

“Ragtime” is a profoundly moving experience, but it requires an audience to pay very close attention. There are so many characters involved–including such real life figures as activist Emma Goldman and tycoons Henry Ford and J. P. Morgan–that it can get a little confusing for those who haven’t read the novel.

With a book by Terrence McNally, music by Stephen Flaherty, and lyrics by Lynn Ahrens, “Ragtime” was nominated for 13 Tony Awards when it opened on Broadway in 1998. Directing and choreographing the national touring production is Marcia Milgram Dodge.

Kate Turner dazzles as an upper-class WASP wife and mother. Her lilting voice and passion for justice make her the shining star of this poignant story. She opens her arms and her home to the baby found hidden in the garden.

Chris Sams also stuns with his great voice and compelling stage presence as talented musician Coalhouse Walker. When his personal life takes a tragic turn, he resorts to violence in his search for justice. The love story between Coalhouse and beautiful brown-eyed Sarah (Leslie Jackson, another riveting performance) brings everyone to tears.

A lighter touch is provided by Tatch, an idealistic Jewish immigrant. Delightfully played by Matthew Curiano, the artistic immigrant’s visions and dreams are fully realized. Be warned that everyone doesn’t fare that well in this morality tale.

Dallas Summer Musicals has cast two local boys as young Coalhouse Walker. James Hayes, a bubbly 7-year-old 1st-grader at St. Phillip’s School, stole the show from the talented cast when he ran on stage at the opening night performance. He alternates the role with 5-year-old Anthony Taylor, a Pre-K student at St. Phillip’s School.

We were fortunate to get the following information and comments from the two youngest cast members.

James Hayes has played the drums since he was 3. He plays for St. Luke Children’s Choir, Salem Institutional Baptist Church children’s choir, and his school’s Chapel Service. James says, “My favorite musical is ‘Lion King’. I loved all the bright colors. I love all kinds of music but I really like to play along with Jazz and Christian music. My favorite musicians are Michael Jackson and Cold Play. Besides playing drums onstage, I have been in Christmas plays at my church and school. I also performed playing my drums at the Black History Program. I am very excited about being in ‘Ragtime’.”

Anthony Taylor has loved participating in his school’s theater program since he was four. He was a member of the ensemble for his school’s “Destiny Musical” in 2016 and “Christmas Musical 2015-2016. He is interested in dancing singing, painting drawing, watching plays, visiting museums, running and soccer.

Anthony says, “I have not seen a Dallas Summer Musicals production yet. However, I saw my first musical for my 3rd birthday. I was on a Disney cruise and saw shows nightly for seven days. I have also visited local children’s theaters, attended school plays at my dad’s school, and for my 5th birthday, saw ‘Peter Pan 360’.”

Anthony’s favorite music is Jazz because he likes the sound of all the instruments. Favorite artist is Bruno Mars and his hit single ‘Uptown Funk’. “I like to do both singing or dancing,” he says, “I make up my own songs at home. I’m interested in a career in musical theater because I think it will be lots of fun making people smile and laugh.”

No doubt Anthony will get his wish to make people smile and laugh during the national touring production of “Ragtime.” But most of us in the opening night audience also shed tears at the needless tragedy that befell so many of those 20th Century dreamers. “Ragtime” is a classic masterpiece with a message that is still as relevant as today’s headlines.

For more information about the show or the Dallas Summer Musicals season, or for ticket information, please visit www.dallassummermusicals.org.

Chase Rice and KC and The Sunshine Band Coming To Arlington