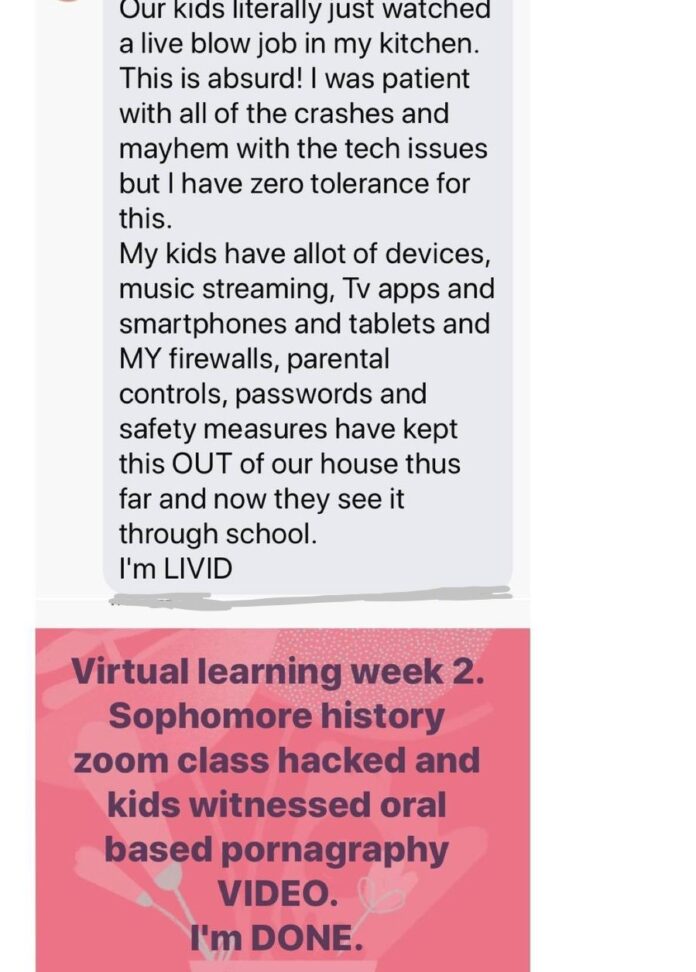 Midlothian- Earlier today a sophomore history class was “zoom bombed” according to the parent of a Midlothian ISD student. She shared her shock and outrage on Facebook stating, “Our kids just literally watched a live blow job in my kitchen. This is absurd!” The parent went on to say she was patient with all of the tech issues the District has experienced the past few weeks, but has zero tolerance for this incident.

The first week of virtual learning had some technical hiccups as Zoom and other apps had a national system wide outage. The outage impacted multiple districts and led to a significant amount of downtime on the first day of class. Midlothian ISD was quick to communicate the outage to parents and students keeping everyone in the loop.

According to wikipedia, “zoombombing” or zoom raiding is “an unwanted, disruptive intrusion, generally by Internet trolls and hackers, into a video conference call.” These incidents usually involve obscene, lewd or racist comments which lead to the call being shut down.

Another parent said their child had also experienced an incident this week that involved profanity and racist remarks. Midlothian ISD is not the only district that’s experienced zoom raiders. KXAN reported earlier today that a 14 year old student in Marble Falls ISD was in band class when a vulgar, pornographic image popped up on his computer and stayed for over 10 seconds. According to Cincinnati.com, as of late May, the FBI had received more than 240 reports of Zoom disruptions that included broadcast videos depicting child sexual abuse material.

As the original poster says, her kids have multiple devices and streaming apps, and thanks to her parental controls, firewalls, passwords and other safety measures, she’s protected them from pornography and other inappropriate content. So, she’s livid that her children were exposed through Zoom while in a school classroom.

While it’s one thing to monitor your child’s personal online activity, monitoring their online school classes is a different ballgame. If a parent is fortunate enough to be working from home while their child is in class, most can’t spend their day looking over their child’s shoulder. And in households with multiple children, how can parents be expected to constantly check-in on the live Zoom classes? Plus, teachers want to see the children showing up and working independently, not Mom or Dad looking over their shoulder.

At the moment, we have not seen a statement from Midlothian ISD on today’s incident. However, as we pointed out zoom bombing or zoom raiding is a concern for any district using the software in virtual learning environments. So you may want to reach out to your child’s district, campus or teacher and find out what measures and procedures are in place to prevent and protect your child witnessing pornography or other inappropriate content.