Firsthand Report From Passenger On The Norwegian Jewel

We have cruised on the Norwegian Jewel before and loved the ship and its crew so much we scheduled two future cruises on her. One of those trips would have been this April, so you can imagine how interested we were when we saw that the ship was stranded at sea on its current trip to Papeete.

Googling her status this past Monday, we found that she was not being allowed to port and passengers were spending most of their time at sea, since ports were not allowing them to dock. In looking further, I found a posting on Facebook by Sam Finta from Atlanta, Georgia, who had been on the ship since she set sail in Sydney, Australia to Papeete, Tahiti, in French Polynesia.

A message to Mr Finta found him in good spirits and very happy with the ship as well as the crew. Thursday evening, he told us “We were just told to buy our tickets out of Honolulu for the 22nd or 23rd. So, we are only two days late.” Unfortunately, by the next morning, Hawaii had reversed its stance on passengers disembarking in Honolulu. Officials did say they would allow refueling and restocking of food and other essentials.

Regarding the cruise, he said “all food and supplies are good.” He noted that although some people appeared stressed, others were enjoying the voyage about as much as they would any normal cruise. “As you recall,” he said, “the original cruise was supposed to end on the 20th.” The original schedule called for the Jewel to end the cruise in Papeete rather than the current final port of Honolulu. 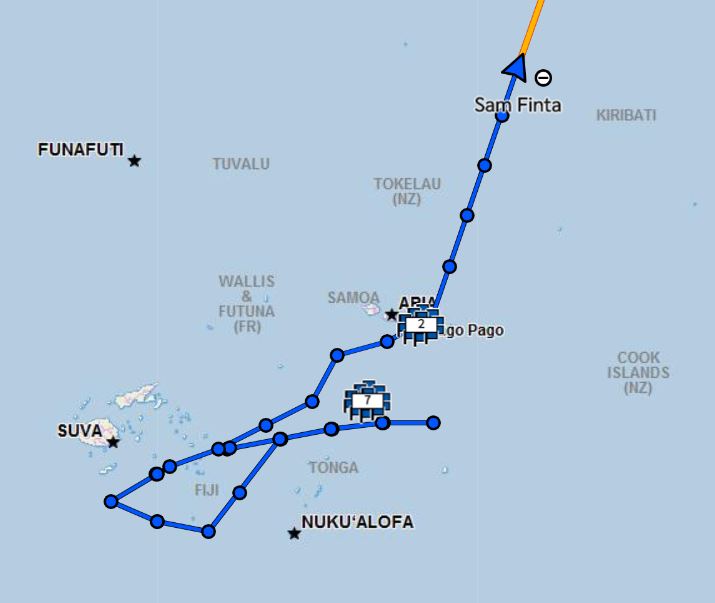 He said the ship only made stops in Brisbane, New Caledonia and Fiji, but they got to spend four days in Fiji.

The original schedule for this dream cruise had been to board in Sydney, stop at Brisbane, Noumea and Lifou, New Caledonia, Mystery Island, Vanuatu, Lautoka and Dravuni, Fiji, Apia, Pago Pao (twice), then Bora Bora, Raiatea and Moorea before the final stop in French Polynesia. It’s not hard to see why Finta chose this cruise with the wonderful ports on its itinerary.

NCL is providing passengers internet in conference rooms set up for them. He said they were allowed free phone calls and chairs were set up for people who had to wait for available phones and computers. “All has been orderly,” he said although it seemed like some Europeans seemed more stressed than other passengers.

As a type one diabetic, he was pleased that the ship would dock on the 22nd because he had only brought medications to last until the 21st. He added there were medical supplies on the ship that he could use but liquid insulin could cause his sugar levels to drop too low so he preferred his own. Now that he will not be allowed to disembark in Honolulu, we certainly hope he can get adequate medical supplies for as long as the ship is still prevented from a final docking.

Finta is on a new inhaled insulin called Afrezza as he has had issues with sugar lows with liquid insulin.”I am part of a diabetes group on afrezza and have helped many so i hope now I can be helped,” he told us. Because Afrezza is a special order prescription, he does not believe they can get it for him in Hawaii. He noted that liquid insulin has almost caused him to die in the past. He has reached out to a facebook group that uses this and hopes to have some delivered if he can figure out where the ship will eventually port.

His experience with Afrezza is very interesting in itself. He started a website (www.afrezzauser.com) describing his situation to help others. It is worth a read for anyone who has diabetes. Finta told us the drug has helped many since it was approved.

Finta pointed out, “The average age on the ship is about 62, so I am not the only one with medication.”

Mr. Finta certainly will have a lot to tell his friends when he gets back to Atlanta. Not the least of which, he was probably on board the only cruise ship in history to cross the international dateline three times in one cruise!

When asked, would you cruise again after this experience, he replied, “Yes I would cruise for sure and with NCL.”