DeSoto City Manager Brandon Wright began Monday evening’s City Council meeting by introducing the Type A and B funds uses subject and whether Type B authorities should be expanded to allow for more types of development.

“Texas law allows for different structure of economic development corporations,” Wright began. “There is a Type A corporation and a Type B corporation. For the future of development in DeSoto, do we have the right development tools right now to help us to proceed down that road?”

He continued, saying right now the City has what are commonly referred to as 380 Agreements. These have a high level of flexibility.

“You have a broad authority in terms of ability to do things. The catch is there is no designated funding source.”

When you look at the DEDC (DeSoto Economic Development Authority) they have a designated funding source, which is sales tax. “They have less flexibility however. They focus on generating primary jobs within the city. They have been a very good tool for developing DeSoto’s industrial areas.”

CM Wright then posed the concept of finding a better way to increase the types of projects that could be undertaken in the city by merging the two – Flexibility and Funding -thus being able to have more flexibility an a designated funding source.

“We are looking at a situation tonight with which you could broaden DeSoto’s Type B Corporation … to align the flexibility into one area.” He then turned the meeting over to Joe Gorfida, DeSoto City Attorney, to explain further.

The only way Type B can do a wider variety of projects is to go back out to the voters. It has to be very specific in seeking voter approval. Type A funding for projects include land, buildings, equipment, facilities, expenditures, targeted infrastructure, and improvements that are for the creation or retention of primary jobs. These must be for eight types of projects: Manufacturing and Industrial Facilities, Research and Development Facilities, Military Facilities, Recycling Facilities, Distribution Centers, Small Warehouse Facilities, Primary Job Training Facilities used by an institution of higher education, and Regional or National Corporate Headquarter Facilities. 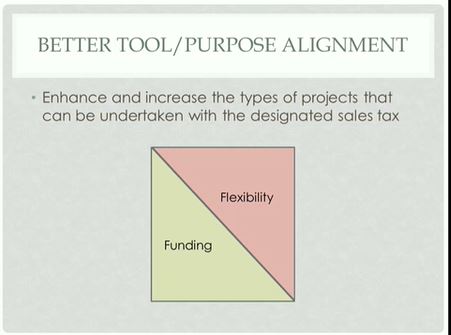 In deciding if there should be a proposal put before the voters, the question arose: “Would you want to change the structure of our Type B?” posed Mr. Gorfida. “Would you want to change the structure of the Type A? These are all things that you can choose from. If you wanted to do any of these (in an election) you would need to consider the ballot language. Our goal would be to have one proposition on the ballot so that we wouldn’t be losing if the voters voted it down we would not lose the current structure that we have of the Type A or the Type B.”

Mayor McCowan asked if Mr. Gorfida could provide some examples of cities that are currently Type A. “The City of Allen is Type A,” Gorfida replied. Midlothian has a Type A and a Type B. There are still a lot of cities that don’t have a Type A or a Type B. Those cities include: Richardson, Plano and Waxahachie.

Councilman Andre Byrd Sr. asked if DeSoto limited itself or was it limited by the State.

“We limited it on the ballot,” Gorfida replied. “My experience has been those cities that have Type A and Type B allow Type A to keep doing the primary job focus like they had been doing and then B focuses more on destinations.”

“Do you know why we chose to limit the scope of Type B so narrowly?” asked Councilman Byrd.

Gorfida replied that he did not know. It originally started out as being broad. He didn’t know if it was the council that narrowed it or not. CM Wright replied that in 1991 the broad language proposition failed and it went back before the voters in 1994 as the more narrow park version.

“If (a new Type B) were approved by the voters, then we could have a board and we would then have an expanded mission under Type B,” Mayor McCowan stated. “Could we also change the percentage of funds that the voters approve to go to Type B?”

What Would Happen To The Parks Board?

Councilperson Candice Quarles asked what would happen to the Parks Board. The reply was that they would remain, perhaps being renamed the Type B Board. The old projects would also remain, Gorida replied.

“If you did a combined entertainment center with parking, restaurants … you could start using the Type B Corporation to fund the infrastructure and Type A for jobs … whereas with your Type B you don’t have the primary jobs to worry about,” Gorfida said. “Big grand ideas, ballparks, museums, restaurants, parking, concessions, a souvenir shop. Clearly, you couldn’t use Type A money for all that.”

“I think what the citizens are asking for in many ways, is more livable commercial spaces – places they can walk to, where they have entertainment, … not to say we don’t need industrial development as well … we can’t have one without the other … My recommendation is broadening the Type B is a great way for us to begin putting together the tools and ultimately the strategy, the policy, to be able to build out some portions of our city.”

“We need to create a couple locations in our city and use this as a major tool to be able to build the type of tool to get the type of entertainment center we are looking for,” Wright said. He continued that if this isn’t done, if the city wants these things they need to be looking at other avenues such as tax abatements. “These ultimately start to play with our tax base.”

Mayor McCowan concluded, “if this is something Council and the citizens want to work toward and Type A will help us get there, I think there is a way to work it.”