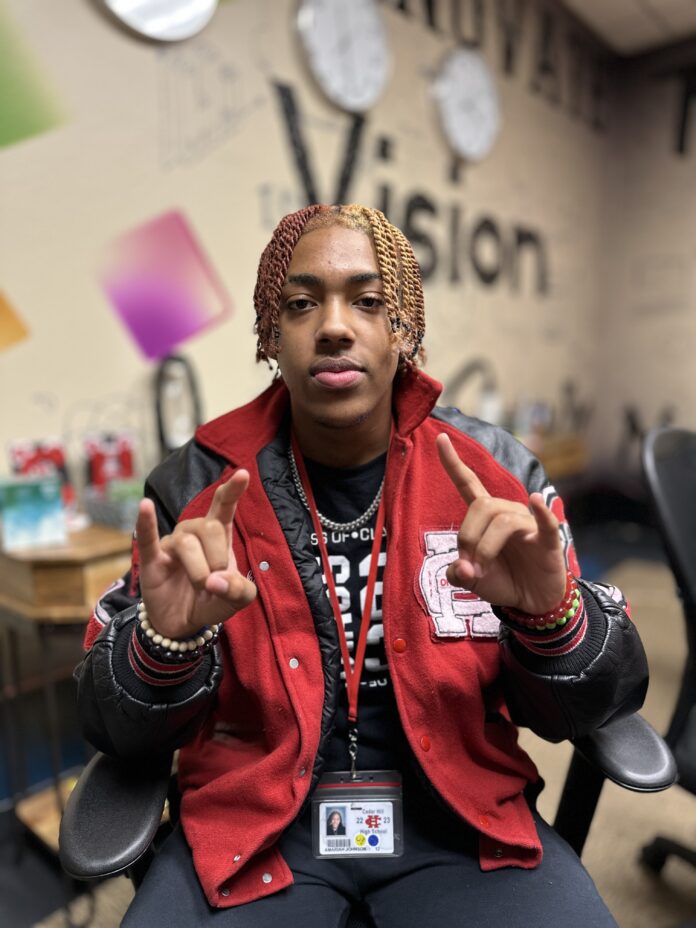 “There are so many opportunities for scholars,” said Roberts, who ranks 27th out of 504 scholars in the Cedar Hill High School Class of 2023. “My classmates in ECA have similar goals, and they’re very dedicated.”

ECA is a choice program where scholars have the opportunity to take dual credit courses from Dallas College at the CHHS Campus.

Roberts has made the most of his time on the CHHS Campus, as he’s involved in a wide variety of activities, including Orchestra, Track & Field, Culinary Arts, Step Team, National Honor Society and the National Technical Honor Society.

Roberts has played the Cello since he was a Permenter Middle School sixth grader. A change in his class schedule, from choir to band, led to the decision.

Now, he’s the section leader for the Cello players, and he was ecstatic when Cedar Hill Orchestra Teacher Elizabeth Judd came out of retirement to return to CHHS.

“Mrs. Judd has taught me patience and how to work with my fellow scholars,” Roberts said.

Roberts joined the Track & Field Team to stay in shape. He competes in the 300 Meter Hurdles and 800 Meter. He appreciates the leadership of CHHS Head Boys Track & Field coach Kevin Benjamin.

Roberts is the President of Culinary Arts at Cedar Hill

“I plan to own restaurants– I’ve been cooking since I was 8 years old,” said Roberts, who calls Chicken Parmesan one of his favorite dishes to prepare.

Although he started cooking at a young age, Roberts said learning the difference between “technical” and “homestyle” cooking has been very valuable.

He plans to study Business in college (his top five are SMU, North Texas, Howard, Florida A&M and Texas) and then attend Culinary School.

Roberts is grateful for the return of the step team – something that was offered when he was a freshman in 2019-2020. Due to the COVID-19 Pandemic, it stopped for a couple of years. Last year, it started at High Pointe Elementary and is now being offered at multiple campuses.