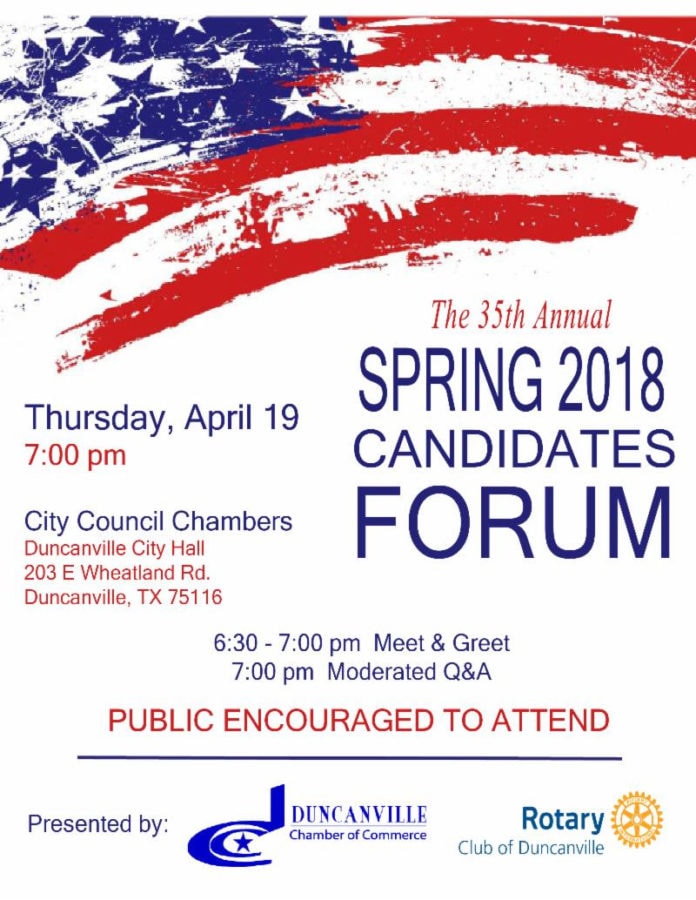 Four city council candidates and one candidate for mayor attended the event. Those unable to attend were asked to provide bios and other information. Attending were Don McBurnett, running for District 2 spot on the council; Jeff Burton, Mark Cooks, and Brenda O’Brien, candidates for District 4; and Janet Harris, running for Mayor. 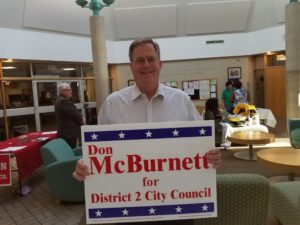 First speaker was District 2 candidate Don McBurnett, an accountant who has lived in Duncanville 34 years. A DHS graduate and booster, he is also a Northwood University graduate, and active in Duncanville Lions Club activities. He and his two children are members of First Christian Church of Duncanville. McBurnett believes the biggest issue facing the city is replacing and maintaining its infrastructure.

Another candidate for District 2, Misty Dawn Bain, did not attend the forum and did not submit any information for the program.

Jeff P. Burton, District 4 candidate, is an electrical engineer who has been a resident of Duncanville since the early 1980s. He and wife Virginia have two daughters, both DHS graduates, and three grandchildren. He has served in several leadership positions with his church and on city boards and commission, currently on the Neighborhood Vitality Commission. He served on the steering committee for the Comprehensive Plan and believes the biggest issue for the city is implementing the Comprehensive Plan. 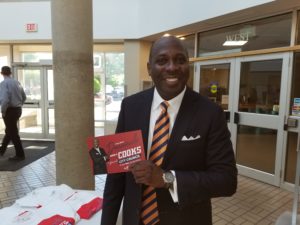 Mark D. Cooks, District 4 candidate, is a 12+ year resident of the city who has served on several volunteer boards and panels. Now retired, he spent over 40 years as a banker, including senior vice president and district manager for Wells Fargo Bank. A member of Concord Missionary Baptist Church, he is a former Duncanville City Council member and Mayor Pro Tem 2012-2014 and has served on a number of boards. He has two grown sons and four grandchildren. He believes public safety is the top concern for the city. 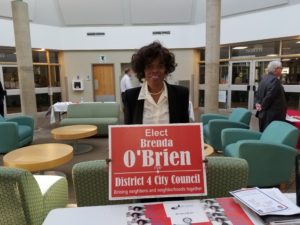 Brenda O’Brien, District 4 candidate, is President/CEO of Next Door Therapy Services LLC. An expert in Geriatric Health and Occupational Therapy, she moved to Duncanville from Michigan nine years ago. The mother of four, including a special needs child, she serves on the Neighborhood Vitality Commission and has served as the group’s president. She believes the biggest issue facing the city is the lack of revenue and business growth.

Mayoral candidate Janet Harris moved to Duncanville with husband James Harris, owner of Justin Moving Co. LLC, in 2005. Their adult children, Justin and Jaimee, both attended DHS; both are now married with children. Harris served the city as an at-large councilwoman (2011-2013), is a former Chamber of Commerce Chair, and member of Best Southwest Partnership Board and several other boards. A member of Eastgate Fellowship International, she serves as family care ministry leader and has been a Deaconess 30+ years. 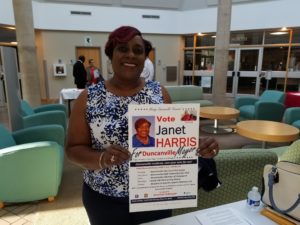 Harris believes the biggest issue facing the city is drawing viable businesses to locate here. She hopes to work with the economic development team to help make this happen, sending a message that Duncanville is a business-friendly city.

Boyd announced one other Mayoral candidate, Barry L. Gordon, was sick with the flu but his bio and answers to several questions were printed in the program. Gordon retired in 2003 from AAFES as senior vice president. He is president of the board of directors, Duncanville Community and Economic Development Corporation, and VP of the board, Tax Increment Financing District. He and wife Marlyse are members of Gospel Lighthouse Church, where he chairs the finance committee. Gordon believes working toward developing economic plans to attract sustainable retail is the biggest issue facing the city.

One other candidate for Mayor, Matthew J. Jones, was not present and did not submit information to the forum.

Longtime Duncanville Mayor David Green and several City Council members are not running for re-election this year. Early voting begins April 23 at the Duncanville Public Library. On election day May 5, voting will be at precinct locations. A video showing the speeches and additional answers by the candidates who attended the Voter Forum is posted online at DuncanvilleChamber.org.