City of DeSoto waste hauler Republic Services will resume limited bulky waste collection service of up to 4-cubic yards per residence per week beginning on June 15, 2020. Regular collection of Bulky Waste was suspended on April 6th due to potential exposure to COVID-19 tainted bulky waste. This suspension also allowed Republic to focus on collecting the extremely heavy volumes of residential trash generated by families who were at home 24/7 during shelter-in-place restrictions.

The shelter-in-place restrictions also led to a sizeable increase in residential yard projects that greatly boosted the volume of trimmed brush. Weekly limits of 10 cubic yards per residence, enough to fill the beds of two pick-up trucks, were implemented and will remain in place until further notice.

“In May the City assisted hundreds of residents to dispose of 39-tons of bulky waste at our temporary site,” noted DeSoto City Manager Brandon Wright. “We know this is an important service and are glad that Republic is restoring this service in our community.”

Given the anticipated backlog of bulky materials to be collected, Republic is implementing a weekly limit of 4-cubic yards per household. Four-cubic yards of bulky waste is equal to four (4) washing machines, a very large couch plus, two refrigerators, etc. Placing a limit on bulky waste will enable Republic to collect a small amount of bulky materials from each household, while allowing crews to complete their routes without negatively impacting the collection of standard household waste. 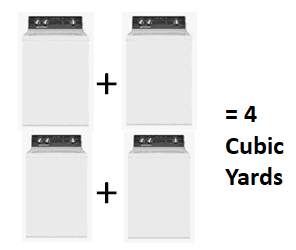