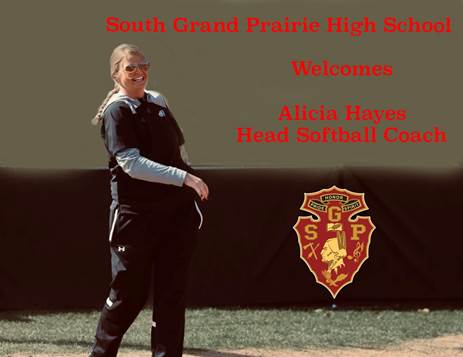 Spring sports at South Grand Prairie High School will have another new face as Alicia Hayes has been named the new head softball coach. Hayes spent the past four years at Prosper HS as the varsity assistant coach and is entering her 13th year of coaching.

Hayes replaces Ted Garcia, who led the Lady Warriors to the second round of the playoffs this season after a District 8-6A championship. It was the third second round playoff appearance in four seasons with him at the helm. They also reached the second round in 2018 and 2019.

The 2020 season postseason was wiped out because of the COVID-19 pandemic. At the time the season was canceled, the Lady Warriors were 16-6 and 2-0 in district.

“I am so excited about this opportunity to be working with such great student athletes, teachers, coaches and administration,” Hayes said. “The team had a great season last year and I am so ready to get to work and build on what they have started.”

At Prosper, Hayes was part of a program that posted a 92-33-1 record over her time there, including 35-5 in district play with a district championship (2018). This past season they were second in District 5-6A and reached the regional finals of the playoffs before falling to Flower Mound to finish with a 29-5-1 record. They also advanced deep in the postseason in 2018 and 2019.

“My time at Prosper was great, and I am very lucky to have been able to work the last four years with people I have grown to love and call family,” Hayes said.
Hayes played at Northeast Texas Community College and Southern Arkansas University.

“Playing softball in college was one of the best times of my life,” she said. “No one can truly understand the life of a college student-athlete unless they go through it.

“My freshman year at Northeast Texas Community College, we missed the conference tournament by a game and then made it for the first time my sophomore year. I ended up playing at Southern Arkansas University but my senior year was cut short due to a knee injury.

“Playing at that next level really did help me realize that this game means so much and I have been so fortunate to still be doing this after 12 years. I love that I get to go to work and not only teach young women about softball, but also teach them about being a servant leader to their community and preparing them for their future.”

South Grand Prairie was one of three area teams to win its district in 2021, along with Red Oak in District 14-5A and Venus in District 11-4A. Venus advanced the farthest of any area team in the postseason, reaching the third round.