Tickets are priced from $15 to $27, and are available by calling 972-572-0998 or by email to aartboxoffice@gmail.com. Tickets are also available for online orders by visiting www.aareptheater.net. A budget friendly Thursday show, priced at only $15, will be Jan. 25 at 7:30 p.m. at MVC Performance Hall, 4849 W. Illinois Ave.

“Pure Confidence” will star Darren McElroy and Christian Taylor in the lead roles. Also featured in the cast are Ken Orman and Raven Lewis. The inspirational script focuses on an era when some of the world’s best thoroughbred jockeys were slaves. One of these jockeys, Simon Cato, came up with a plan where he could use his talent and purchase his freedom.

There were a number of obstacles facing Cato, including the fact that he had no money. This was magnified by his efforts being blocked by greedy slave owners, the laws of the land, life-threatening bigotry, falling in love, and civil war. Horse racing sets the stage for the riveting drama that has been termed “a surprisingly funny, daring and emotionally moving look at the complexity of race, humanity, love and dignity.” 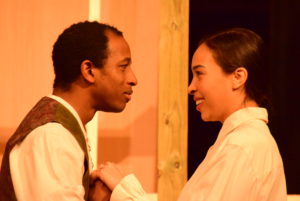 Pure Confidence is a tale of human triumphs and failings, exploring the true meaning of freedom. The company has issued a warning that “1860’s language and attitudes are prevalent and expressed from beginning to end. Modern racial sensitivities are not observed in the script.”

Since his first professional theater production, “Little Tommy Parker Celebrated Colored Minstrel Show” in 1986, playwright/performer and artistic director Carlyle Brown has gone on to create a number of plays. Now based in Minneapolis at The Playwright’s Center, Brown has written numerous works, such as “The African Company Presents Richard III” and “Buffalo Hair,” that have received critical acclaim. “Pure Confidence” had a successful off-Broadway run following its opening in the Twin Cities.