Tonya Haith understood the disappointment Lexi Monday was going through. So she and some friends worked to make sure her reason to celebrate didn’t vanish into the air.

Lexi’s big day of graduating with her classmates at Waxahachie Preparatory Academy was taken away after she came in contact with COVID-19. She actually could have kept it a secret, but chose instead to tell school officials, knowing it meant the end of her participation in graduation ceremonies.

Having had her own big graduation moment taken from her by something she could not control, Haith knew the feeling all too well. So, she and the Midlothian Action Commission set up their own ceremony for Lexi once her test results came back negative.

“When I read Joani’s (Lexi’s mom) post on Facebook about Lexi not only having to miss graduation, but that someone else would read her salutatorian speech, my heart melted. Lexi could have attended her graduation without anyone knowing, but she made that great sacrifice and told the school, knowing what that would mean,” said Haith, who co-founded the MAC last year with pastor Ray Miller.

“I had empathy for her. I was the valedictorian for my undergraduate degree, and I missed giving my speech because I was stuck in traffic for four hours. A vehicle caught on fire in a tunnel. I remember how disappointing that was. Lexi deserved to have a special recognition for her hard work those four years.”

Lexi was the salutatorian of her class, a life of large expectations and much success is on her horizon for the taking. She was all set to give such a speech at graduation, set to inspire her classmates.

It was her day.

And then, like so many other things in today’s world, COVID-19 had other plans.

COVID-19 exposure puts her on the sidelines

“I don’t think it really hit me until the next morning when I watched my friends graduate on Facebook live. It was devastating to not be there with them,” Lexi said. “The most heartbreaking part for me was listening to my English teacher, Ms. Green, read my salutatorian speech about my class graduating together when I no longer was able to be there.

“There were two reasons I decided to come forward,” she said. “The person I came in contact with had not been taking the proper precautions, and I remember how upset I was since it could have been prevented. I didn’t want the people at my school to feel what I felt if I was positive. The second reason was because I knew older people and people more susceptible would be in attendance, and I didn’t want to chance them being exposed.”

The folks at the MAC stepped in to make sure Lexi still had her special moment onstage. They held a special graduation ceremony for her June 28 in the Log Cabin Park.

“Lexi’s integrity and selfless sacrifice demonstrates the Christian character that was instilled in her by her parents. Her exceptional academic achievement and unwavering character makes her a great role model for youth and young adults,” Haith said.

“The ceremony was beautiful. I am so appreciative of the Midlothian Action Commission and everything they did for me,” Lexi said. “It was a huge blessing to me to see God use my pain to reach others.”

Lexi was a very active student at WPA, playing golf and volleyball, being involved in a leadership group, and vice president of the student council as a senior. She’s debating between attending beauty college or studying at nearby Navarro College.

“I wanted to stay home a few more years to get on my feet financially before I move out. I was accepted at DBU (Dallas Baptist University) and almost went there, but I didn’t want to be tied down by student loans for a big portion of my life,” she said.

“I really want to focus on my education and my future, but my volleyball coach has asked me to help with the team next year. So, if possible with my schedule, I am looking forward to that as well.”

Though Lexi’s decision to reveal her contact with COVID-19 resulted in immediate disappointment, Joani said she and her husband David have never been more proud of their daughter.

“The night before I was in tears struggling with what the right thing to do was, because this was our baby, our last kiddo to graduate. Her dad asked her what she thought, and she said ‘Dad, I just don’t think it would be right to not notify the school,'” Joani recalled.

David said Lexi’s decision was a “Christ-like example.” He said her honesty and integrity, placing others above herself, set an example for many, including her siblings.

“She is our baby, our youngest of four daughters, but she is also an aunt already to two nieces and three nephews, which, what she did we feel was a great example for them to witness though her,” he said.

“It has taught me that doing the right thing can be extremely hard, but can be very rewarding in the end,” Lexi said, adding a quote from the Bible, Galatians chapter 6, verse 9. “And let us not grow weary of doing good, for in due season we will reap, if we do not give up.” 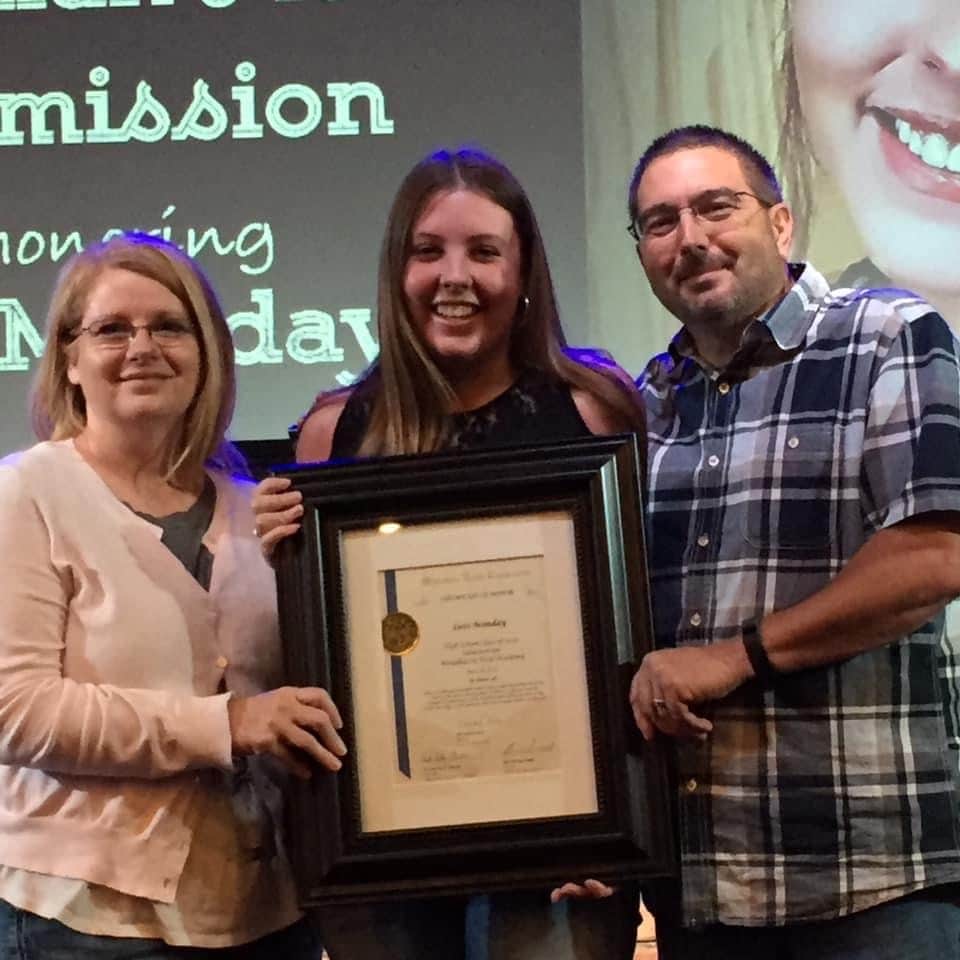