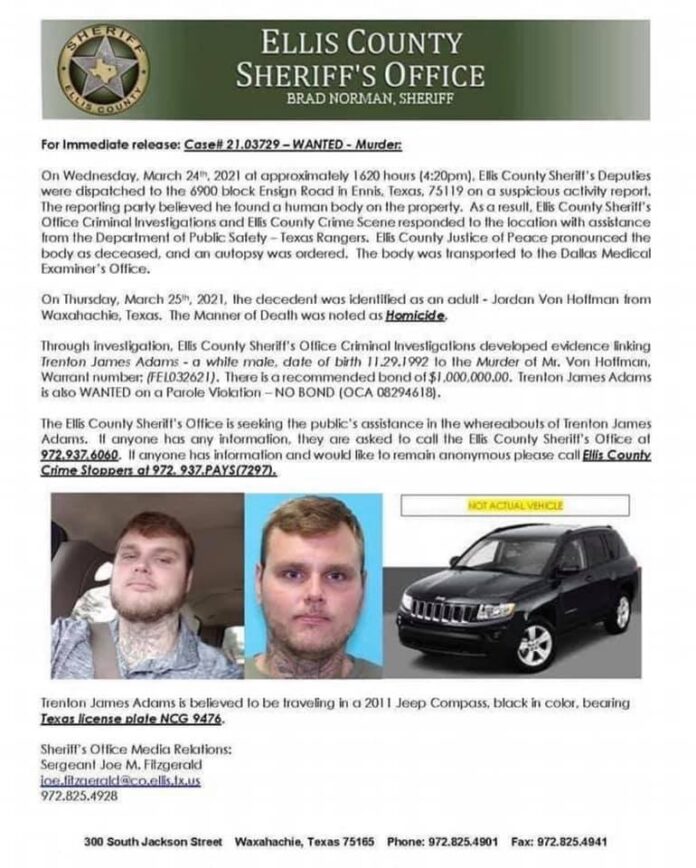 Ellis County Sheriff’s Office has issued a warrant (FEL032621) for the arrest of Trenton James Adams in connection to the murder of Jordan Van Hoffman. He also has a warrant for a parole violation NO BOND (OCA 08294618). Trenton is also known to go by the name Trenton Hector.

On March 24, around 4:20 pm the Ellis County Sheriff’s Deputies were dispatched to 6900 Block Ensign Road in Ennis, TX 75119 responding to a report of suspicious activity. The reporting party stated he believed he’d discovered a human body on the property. Because of the nature of the call, Ellis County Sheriff’s’ Office Criminal Investigations and Ellis County Crime Scene responded with assistance from Department of Public Safety- Texas Rangers.

Ellis County Justice of Peace declared the body was deceased and ordered an autopsy. The body was transported to the Dallas Medical Examiner’s Office. On March 25, Thursday, the body was identified as that of missing Waxahachie man Jordan Van Hoffman. The Medical Examiner determined the cause of death was homicide.

The suspect, Trenton James Adams, is believed to be driving a 2011 black Jeep Compass with Texas license plate NCG 9476.