Home News Tarrant County Adopts No Refusal All The Time 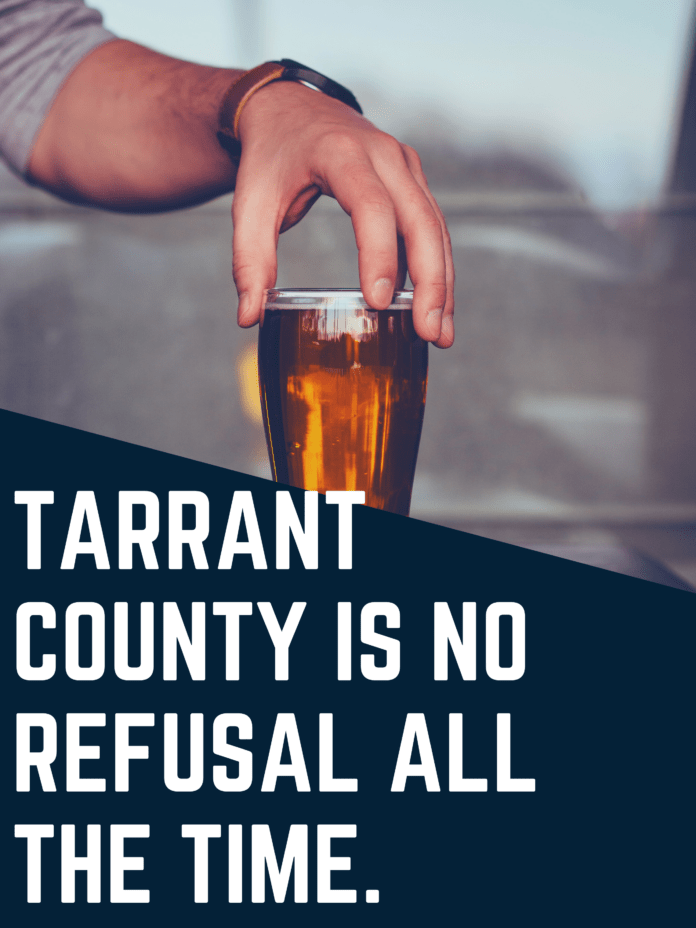 (Fort Worth, Tx) – Tarrant County is No Refusal all the time.

That means drivers pulled over for suspected impaired driving who refuse to take a routine breath test will be subject to a court-ordered blood test instead.

This program began as a special effort launched around holidays when people were most likely to drink and drive.

Now, No Refusal is in effect 365 days a year across Tarrant County and in all of its 41 cities. Police officers and sheriff’s deputies have access to expedited judicial warrants and centralized blood-draw locations.

“Times have changed,” Tarrant County Criminal District Attorney Sharen Wilson said. “In the past, we focused on specific weekends. Drinking and driving is a full-time challenge. Our police chiefs agree it is best for our community and the safety of our citizens to be No Refusal all the time.

Goal: Reducing Number of Cases Related to Driving While Intoxicated

Last year, there were 6,001 misdemeanor and felony cases of driving while intoxicated filed in Tarrant County courts. The goal is to dramatically reduce that number.

“I am very excited about Tarrant County becoming 100% no refusal on DWIs,” Tarrant County Sheriff Bill Waybourn said. “I know that people recognize that DWIs are a threat to the safety of us all. The more that we can do to ensure that we hold offenders accountable, and provide the truth about the level of their blood alcohol content, is best for our community.”

Tarrant County joins Bexar County in becoming No Refusal all the time.

This program began in Tarrant County in 2008 under Richard Alpert, then an assistant district attorney in Tarrant County, who has long been considered the state’s leading expert on DWI and intoxication manslaughter prosecution.

“My hope was simply to focus our law enforcement resources on ways to collect the best evidence available for use in the prosecution of DWI offenses,” Alpert said. “The success of that program and those that followed on a growing list of holidays made it clear that the desire on the part of our law enforcement to participate in No Refusal was there.

“As a county, we recognize the impact impaired drivers have on families,” Haltom City Police Chief Cody Phillips said. “Collisions happen far too often from impaired drivers that choose to drive instead of utilizing numerous alternative options.

This program is designed to cut down on intoxicated drivers. It lets drivers pulled over for suspected impaired driving, who refuse to take a breath test, to instead be subject to a court-ordered blood test.

“There is no doubt that Tarrant County’s ability to wear the No Refusal mantel year-round will serve as a sobering reminder to our citizens to be more responsible when they get behind the wheel and will ensure that those that don’t get the message will be held accountable as officers have the benefit of science to support their opinion that a suspect was driving while intoxicated.”