The City of Cedar Hill honored civic leader Shelia Hood with their Great Impact Servant Leader Award on September 26. As an intricate part of the Cedar Hill business community, Shelia Hood served as a member of the Cedar Hill Chamber of Commerce Board of Directors for over six years. She was named Chairman of the Board two years (2007-2009), and selected as the 2004 Cedar Hill Woman of the Year.

Hood has served on the Advisory Board for the Cedar Hill Food Pantry, with Love Your City, Strategic Business Alliance and 2017 Cedar Hill Bond Committee. A 2004 graduate of Leadership Southwest, she is a member and officer of the Board of Directors for Transformation Vision Cedar Hill. She also serves with Inspire School Programs and the Executive Committee of Hope Mansion.

Hood has been a part of the Executive team at Trinity Church since 1995, where she directs business operations. She believes all of her previous business training and experience was merely preparation for being a part of God’s plan at Trinity Church and Cedar Hill. She and her husband, Jim Hood, have been married for many years. The couple has four children with an ever-changing menagerie of animals.

The award proclamation noted that “Shelia has a gift of adding value to each person she speaks with by giving her full, undivided attention as she listens and responds to them. Her heart for service and the community exemplifies the distinctive character many strive to emulate.”

City Councilwoman Jami McCain said, “Every year the council meets to discuss direction for the following year. About two years ago we evaluated how we were recognizing citizens who exemplified our city’s values: people and relationships, stewardship, highest ethical standards, behavior and integrity, and servant leadership.”

“For years we have presented the Lifetime Achievement Award to a very small number of citizens we feel come around once in a lifetime,” McCain said. “But we realized there were so many others that were giving of themselves daily to make our city great. I volunteered to lead the charge in developing two additional, more frequent, awards: The Great Impact Servant Leader Award and the Good Samaritan Award. The GISL is recommended by staff and council, and given to citizens who have, for years, giving selflessly to better our community and the lives of those in it. The Good Samaritan Award is given to citizens, many of those the staff and council may have never met. They are nominated through the website for acts of kindness, bravery, or all around stellar citizenship.” 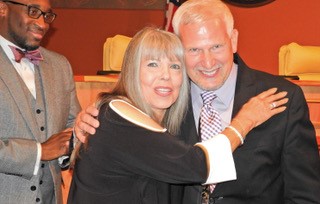