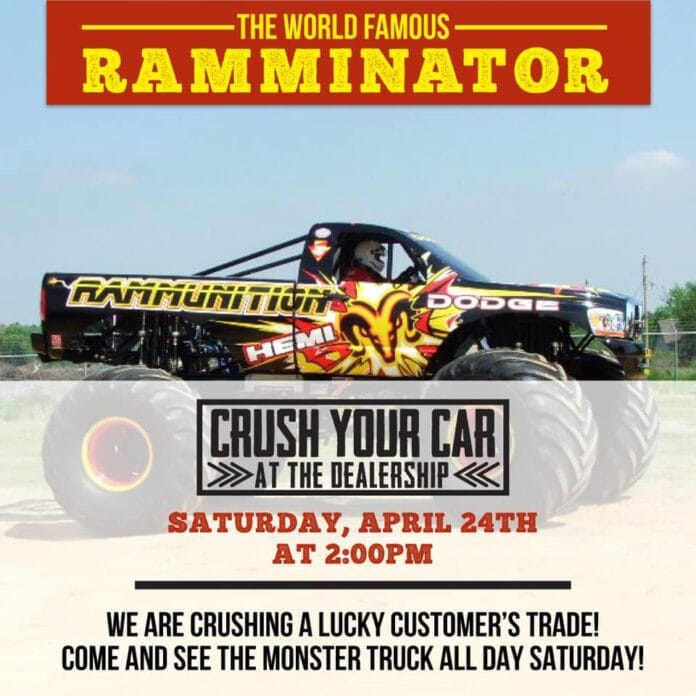 WAXAHACHIE –For Ram Truck fans start your engines because you are going to want to be in Waxahachie this weekend for a visit with the Rammunition.

The tours are done by the Hall Brothers, a small racing team from Illinois who travel all over the country to compete in races and visit dealerships or children’s hospitals.
The team is led by brothers Mark and Tim Hall and they do everything from truck maintenance to competing in races and crushing cars.

“It’s always neat to get out to the dealerships,” said Tim Hall from the Hall Brothers Racing Team. “Fans get to see the truck up close, and it allows us the time to visit with them that we typically don’t get at a race. It’s a lot of fun!”

The event will take place on Saturday, April 24 at 2 p.m. and Ellis County residents can get an up close and personal view as cars crumble under the Rammunition’s wheels during the car crush.

While there fans can register and enter for a chance to win the 2021 Sweepstakes where one (1) Grand Prize Winner will receive a vehicle credit in the amount of $75,000 valid toward the winner’s choice of a vehicle from the Chrysler, Dodge, Jeep, Ram Truck or Fiat brands.

The entire line of Ram monster trucks are owned and operated by the Hall Brothers Racing Team. In 2018, Raminator and Driver Mark Hall clinched their 13th 4-Wheel Jamboree Series Championship win. In December 2014, the duo broke the GUINNESS WORLD RECORDS® record for the Fastest Speed for a Monster Truck, hitting a record speed of 99.10 miles per hour.