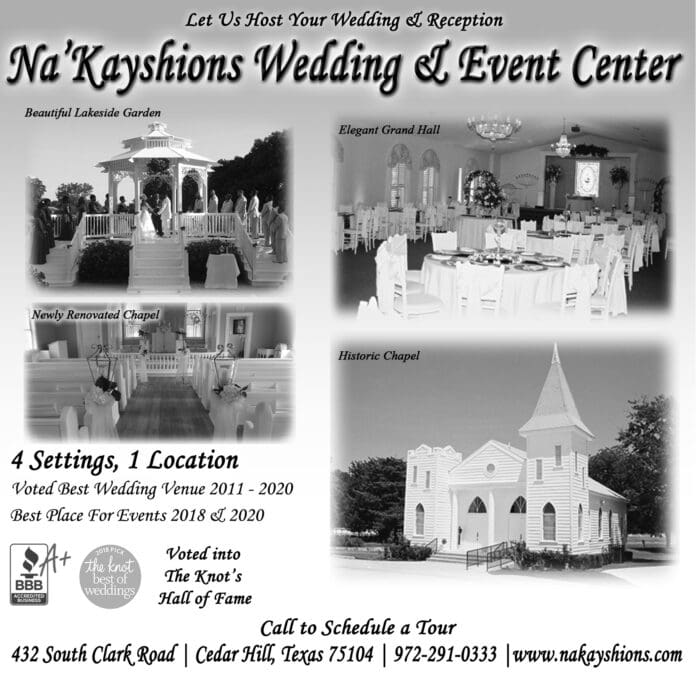 I had never had the occasion to visit Na’Kayshions in Cedar Hill until last year’s Reader’s Choice Awards banquet. It opened in 2007, and has been the headquarters for many elegant events that have taken place in southern Dallas County and Ellis County ever since. I was very favorably impressed and would recommend the building, grounds, and entire area for any type of special occasion.

The building is large, elegantly appointed and the setting is perfect for a wedding or any other special situation.

“Versatile service,” is what Na’Kayshions owner Nancy Johnson says sets the business apart. Nancy and her husband Samuel have run the center over a decade.

“Our wide range of vendors and staff ensures that our clients can have exactly the event they want,” Johnson explains. From the decorations to a wide selection of food options, disc jockey services, special effect lighting and more, NaKayshions builds the event from “the ground up,” Jackson emphasizes.

How The Dream Began

Na’Kyshions has been recognized as the first minority built and operated Wedding and Event Center in the Southwestern portion of the DFW metroplex. Nancy and Samuel say proudly “the company has remained unbeatable and sought-after since its inception.” A four-venue site, “the idea to open a facility of this magnitude was a vision from God,” Jackson says.

Initially, the objective was to renovate an old existing frame home at the present location. The couple wanted to transform the entire site into a beautiful oasis. With the variety of challenges and financial issues it would have taken to make it happen they ultimately decided the idea was not cost effective. Thus, they decided the best option was to create and build a world class venue from the ground up.

“A completely new structure called The Grand Hall was designed and built,” Jackson explains. “The Grand Hall is a beautifully decorated facility adorned with chandeliers, stained glass, a raised stage, a disco ball and a wooden dance floor.

The facility has been the chosen site for many weddings, receptions, award banquets, meetings, dinners, conferences and birthday parties and it can hold up to 300 guests. From the moment I walked in for the 2019 Reader’s Choice Awards Banquet, I knew this was the place I wanted to book for all future events in southern Dallas.

Who doesn’t love events that take place along a beautiful shore line. The Johnson’s knew they had to build a garden gazebo overlooking a tranquil lake. They made that dream come true too. Currently the Garden Gazebo sits on the lakeside surrounded by thick trees and stunning roses. It is a scene that brings to mind the resort that was created in the popular Netflix series “Heartland.”

“It is the perfect place for a ‘Cinderella Wedding,’” Jackson says happily. I immediately thought of “Lou’s” beautiful wedding by the water and how Na’Kaysions would have been a great site for it. “The garden is also perfect for Mother and Daughter Teas, Fashion Shows and Garden Parties.”

After the first two objectives were met, the next project for Na’Kayshions was to save an old historic 18th-century church. The Jacksons had family ties to the church located at Coit Road in Dallas and they did not want to see it demolished. The church move turned out to be so appealing, news stations captured the historic moment with the Jacksons saving the historic chapel originally constructed in 1890.

At the chapels new home, it now boasts large bells and is the perfect location for christenings and memorials. The Chapel has also been chosen as a film location site by Governor Rick Perry.

The latest addition to Na’Kayshions was in 2013 when a Garden Terrace was added. Jackson says this location is ideal for smaller intimate wedding.

Regardless of the venue chosen at NaKayshions, it seems memories are always being made there.

“My most memorable moment was when a bride was in a head-on collision, hospitalized and underwent several surgeries. Against her doctor’s advice, she was still determined to move forward on her wedding date. She did, and it happened with her still in a wheelchair. She made such a remarkable statement to all who witnessed her courage and determination,” Jackson explains.

Na’Kayshions has won numerous awards over the years including The Knot’s “Hall of Fame” and “Best of Weddings,” numerous Readers’ Choice awards for “Best Weddings and Best Event Center.” The location has been featured in several television productions including TLC‘s “Four Weddings.” Jackson also received the “2018 National Council of Negro Women” Service and Entrepreneur Award.

“Our clients are the most important part of our business and planning an event or wedding is the biggest aspect that centers on our joy,” concludes Johnson. “We know how to make their event one to remember.

My only regret is that there won’t be a Reader’s Choice ceremony at Na’Kayshions this year. Due to COVID-19, we have decided to skip a large scale event, even though Na’Kayshions would be large enough to accommodate a banquet with many attendees. We just felt there is no risk we would be willing to take that could possibly endanger the health and safety of our readers and the greatest business people in North Texas.