Cameron Mackintosh’s new production of Boublil and Schönberg’s musical “Miss Saigon,” is onstage at the Music Hall at Fair Park May 14-26. It’s a smash hit in London, Broadway and across the UK. The musical is part of Dallas Summer Musicals (DSM) and Broadway Across America (BAA) Broadway season.

Single tickets are priced from $25, available at DallasSummerMusicals.org or by calling 800-982-2787. Tickets may also be purchased at the Music Hall at Fair Park box office during the run of the show. For groups of ten or more, call 214-426-4768.

“It’s hard to believe that it has been over 27 years since ‘Miss Saigon’ first opened in North America,” Mackintosh said. “But, if anything, the tragic love story at the heart of the show has become even more relevant today with innocent people being torn apart by war all over the world. This brilliant new production, directed by Laurence Connor and featuring the original, dazzling choreography by Bob Avian, takes a grittier, more realistic approach that magnifies the power and epic sweep of Boublil and Schönberg’s tremendous score.”

“Of all my productions, despite its popularity, ‘Miss Saigon’ is the one that the public has had the least chance to see as it requires such a huge international cast of Asian and Western performers, and a vast array of visually stunning sets. Now, for the first time in 17 years, as it continues to wow audiences in major cities around the world, theatregoers across America will be able to see one of the most spectacular musicals ever written in all its glory, in a new production that critics in London and on Broadway have embraced,” he said.

The musical tells the story of Kim, a young Vietnamese woman who is orphaned by war. She is forced to work in a bar run by a notorious character known as the Engineer. There she meets and falls in love with Chris, an American G.I. They are torn apart by the fall of Saigon. For three years, Kim goes on an epic journey of survival to find her way back to Chris, who has no idea he’s fathered a son.

Featuring stunning spectacle and a sensational cast of 42 performing the soaring score, “Miss Saigon” includes hit songs like “The Heat is On in Saigon,” “The Movie in My Mind,” “Last Night of the World” and “American Dream.” Music is by Claude-Michel Schönberg, lyrics by Richard Maltby Jr. and Alain Boublil, (adapted from original French lyrics by Alain Boublil), with additional lyrics by Michael Mahler.

The new production of “Miss Saigon” is directed by Laurence Connor with musical staging by Bob Avian and additional choreography by Geoffrey Garratt. Production design is by Totie Driver and Matt Kinley based on an original concept by Adrian Vaux; costume design by Andreane Neofitou; lighting design by Bruno Poet; projections by Luke Halls; sound design by Mick Potter; and orchestrations by William David Brohn.

Music supervision is by Stephen Brooker and James Moore, with casting by Merri Sugarman for Tara Rubin Casting. Since its London premiere in 1989, Cameron Mackintosh’s production of Alain Boublil and Claude Michel Schönberg’s epic musical “Miss Saigon” has become one of the most successful musicals in history. The original Broadway production opened on April 11, 1991 with what was the largest advance sale in Broadway history ($37 million). The show went on to play for nearly ten years with 4,111 performances and was seen by more than 5.9 million people.

Miss Saigon Has Won Over 70 Awards

“Miss Saigon” has been performed in 32 countries, over 350 cities, in 15 different languages. The musical has won over 70 awards including 2 Olivier Awards, 3 Tony Awards and 4 Drama Desk Awards. And has been seen by over 36 million people worldwide. The new production opened in London in May 2014 to record-breaking advance sales and critical acclaim.

The Daily Telegraph wrote, “This thrilling new production spills out beyond theatre and speaks directly to the times we live in—magnificent performances.” The Daily Mail said, “The greatest musical of all-time just got even better!” The London Times called the production “thrilling, soaring and spectacular.” NY1 proclaimed “the new Miss Saigon soars to the rafters!” And The New Yorker called Miss Saigon “a dynamite Broadway revival!”

Cameron Mackintosh announced in 2015 that the production would transfer for a limited Broadway run from March 1, 2017 to January 14, 2018 before launching its national tour at the Providence Performing Arts Center in Providence, RI in September 2018. The new production will also play at venues in Germany and Switzerland over the next year. New productions will also open during the next few years in Asia.

The full backstage story of how the new production was created, The Heat Is Back On, is now available on DVD by Universal. It is one of the most comprehensive insights into how a big musical is put together that has ever been filmed. 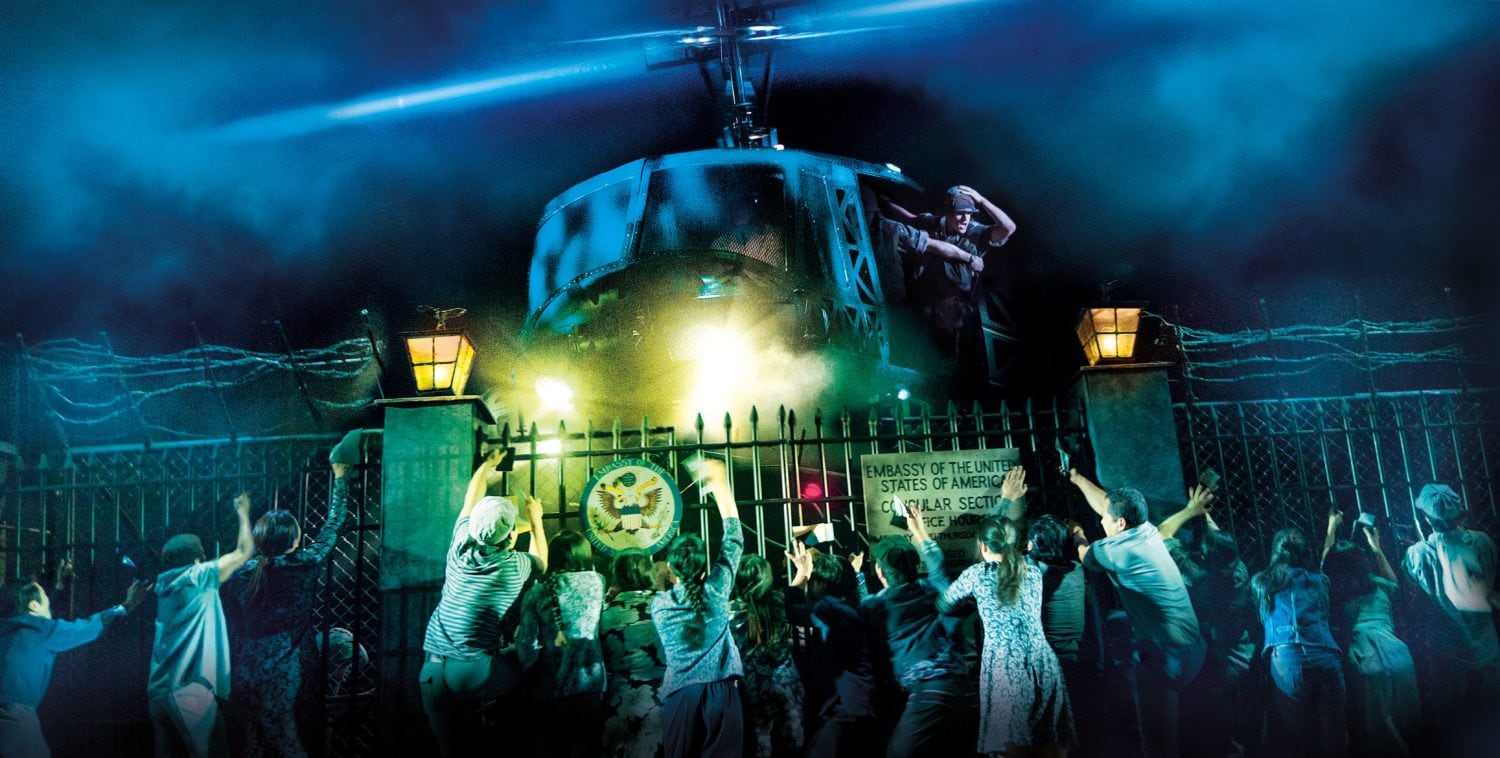