The first thing that hit me square between the eyes with the 2019 Nissan Kicks was the turning radius. There is no better description than”Wow!” It was almost as if it turns within its own footprint. Allowing it to do a complete 180 degrees without straying out of it’s own two lane highway. Maybe that doesn’t sound like much, but try it with any other vehicle.

My first drive in the Kicks was only to the end of our street, where we were picking up a kiddie stairway blocker – not for our kids, but to keep a puppy we are fostering from straying up the stairs and going places where she is not allowed. We have not had a non-housetrained dog in the house ever, and the advent of a brand-new one meant keeping her only on tile surfaces.

Nissan pegs the Kicks as an urban vehicle, targeted toward inner city dwellers. It’s larger than a Smart Car but still has the advantages of being very compact. It’s like a mini-CUV with a hatch that provides a pretty decent amount of room within that hatch for merchandise (such as a stairway barrier!).

Not A Family SUV

I do admit that the kids were not completely in love with the rear seat, but I also must point out they have complained a lot more about many other small sedans and compact SUVs and CUVs. I’d say their main bone of contention was the lack of air conditioning output which satisfied them, something that is of significance in Texas (if we ever get to the hot, hot summer that should be just around the corner. We’ve learned that even if they aren’t hot, lack of air often leads to motion sickness.

The next clear advantage that I found was when I left the neighborhood and headed out onto the freeway. Holy-Moly! It had really good pick up in terms of merging onto the freeway. Albeit, not snap-your-neck acceleration, but it was not dangerously slow like a Mitsubishi Mirage, either. The 1.6 liter engine pumped out 122 horses with 114 lb ft of torque. Considering its small size (169.1″ long) and lightweight (slightly over 1,600 pounds), those ponies were enough to keep even someone with a bit of a lead foot like me happy.

I mentioned that our kids complained about the roominess of the rear seats. In fairness, Nissan developed the Kicks with couples or singles in mind. It’s actually quite stylish for what it is. As I stood at the top of our driveway looking down on it, I had to admire its lines and sporty style.

Nissan’s design signatures include the V-Motion grille, boomerang headlights and taillights and the “floating roof “with a “wrap-around visor” look to the windscreen and side glass. In particular, with the wide C-pillar “hidden” with a black finish that blends into the tailgate glass, the “floating roof” has been exaggerated on the Kicks. That’s one of the aspects I particularly liked when looking at it from above.

The model I test drove was the SR, with a suggested MSRP of $20,870. The Kicks SR Premium Package includes the class-exclusive Bose® Personal® Plus sound system. Part of the Bose® Small Vehicle Series, it delivers a superior, driver-focused listening experience using just eight speakers and proprietary Bose® signal processing to provide what Bose® calls “360 degrees of immersive sound.” Key to its dynamic sound are a pair of lightweight 2.5-inch Bose® UltraNearfield™ neodymium speakers located inside the Kicks’ driver’s seat head restraint.

Technology On Board Nissan Kicks

Among the other on-board technology, Kicks features an available Intelligent Around View® Monitor (I-AVM)6. This uses four on-board cameras to present a virtual composite 360-degree bird’s-eye view of the Kicks, with split-screen close-ups of the front, rear and curb-side views. It also gives the driver an on-screen heads-up when it detects moving objects near the vehicle. This is class-leading technology3 in this emerging U.S. CUV segment and offers a step on the road to Nissan Intelligent Mobility. 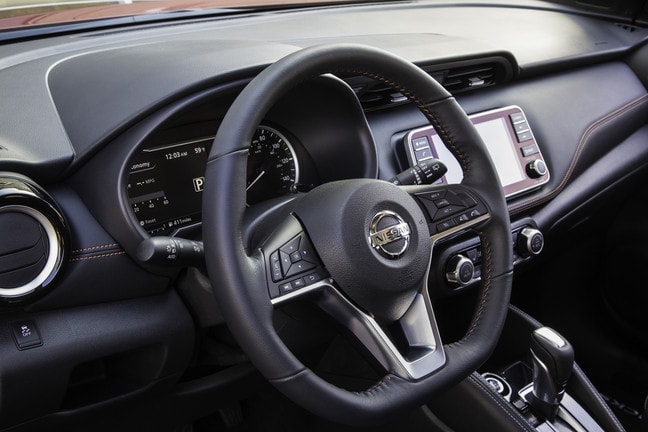 If compact and stylish are on your wish list, give the Nissan Kicks a test drive. You might fin yourself as surprised as I was by its impressive handling.