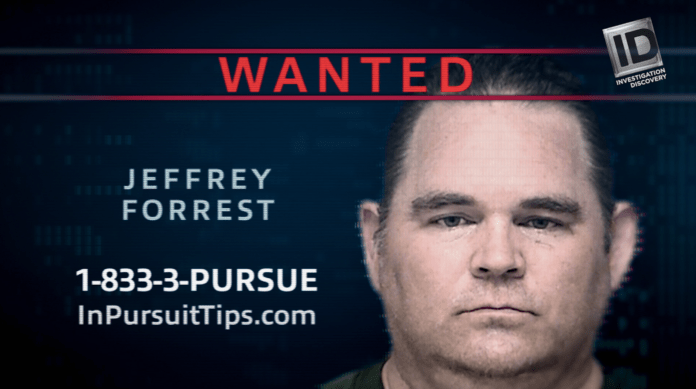 Tomorrow night the season two premiere episode of IN PURSUIT WITH JOHN WALSH, airs at 10/9c on Investigation Discovery. The premiere features a segment on fugitive Jeffrey Forrest from Abilene, TX. Forrest was a church daycare worker at Pioneer Drive Baptist Church who is accused of sexual abuse of children in his care. But after he failed to turn up at trial, police are now searching for a dangerous alleged sexual predator on the run. Forrest has been on the run since August 29, 2016 and has a distinctive Star Wars rebel alliance tattoo on his ankle. Forrest is likely to use the dark web to fund his daily life. Walsh reports Forrest is a heavy drinker and should not be approached.

Viewers with any information on the suspect’s whereabouts are encouraged to text or call the call center at 1-833-3-PURSUE or to submit online at InPursuitTips.com. These resources are both staffed by trained operators who will accept anonymous tips and alert the proper authorities.

John Walsh joins Investigation Discovery, on their joint mission to track down fugitives on the run and find missing children with IN PURSUIT WITH JOHN WALSH. Each week, John Walsh leads viewers through unsolved violent crimes that urgently need to be closed – where time is of the essence and harnessing the power of ID’s active and engaged audience could bring these criminals to justice.

Joining John in every episode is his son, Callahan Walsh, who leads the operation on the ground, working in tandem with the community and local authorities to search for persons-of-interest. In partnership with the National Center for Missing & Exploited Children (NCMEC), the series will also feature two missing children each hour, providing age-progression photos and descriptions in the hopes that viewers can provide new leads to their whereabouts