Home News Grand Prairie’s Unity in the Community for NNO 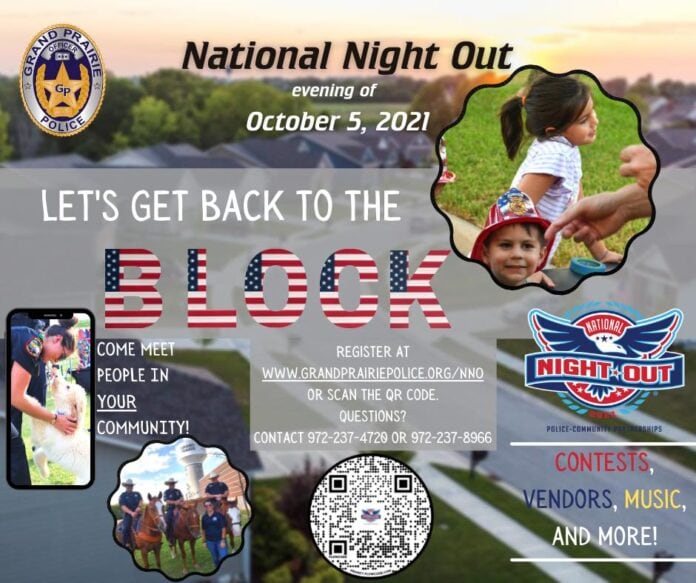 GRAND PRAIRIE – The Grand Prairie Police Department is getting ready for the second part of its Unity in the Community theme, which began last month with the GPPD National Night Out Kickoff Party at Epic Lawn.

While a number of cities are not holding the annual NNO event this year due to pandemic concerns, the City of Grand Prairie will be observing National Night Out on October 5. They are also reminding all citizens to take COVID-19 precautions

The kick-off party was held by the Grand Prairie Police Department as a way to encourage registration for the block parties that take place each year on the second Tuesday of October when the state of Texas observes National Night Out.

The National Night Out Kickoff party featured pet adoptions, a DJ, petting zoo, food trucks, balloon artists, face painting and a dunking booth, in which the Grand Prairie Chief of Police and dignitaries took a dip in the water and there was also a trackless train.

National Night Out next Tuesday will be held as a series of block parties throughout the City of Grand Prairie with an emphasis on spending time outdoors with neighbors, police officers, firefighters and EMS paramedics.

With already over a dozen neighborhoods participating, the main goal of National Night Out is to heighten crime and drug prevention awareness, generate support and participation in anti-crime efforts, strengthen neighborhood spirit and police community relations and send a message to criminals letting them know that neighborhoods are organized and fighting back.