There has always been a debate when it comes to who has better football. Is it Florida or Texas high school football? Well, yesterday at Globe Life Park in Arlington IMG Academy of Florida faced off against the Duncanville Panthers and, at least for the day, cleared things up. Unfortunately, not in the way Texas fans might have hoped. According to Max Prep, IMG Academy was coming into the game ranked #1 and the Panthers of Duncanville came in ranked #6.

As fans looked down each roster, they were in for a treat with 5-star recruits all over the field. IMG Academy was led by 5-star 6-3 190 pound quarterback JJ McCarthy (JJ has commited to Michigan). As he walked to the middle of the field, McCarthy was greeted by Panthers 3-star SMU commit Jadarius Thursby (5-10 186 pound safety). They were both in for a surprise as honorary captain and Dallas Cowboy legend Drew Pearson joined them. With a tip of a cap, the crowd at Globe Life Park went crazy!

A Shootout In The 1st Quarter

IMG started with the first possession. Duncanville was able to stop the run for the first two plays, but then McCarthy threw a dime to his wideout Malik McClain for a 51 yard gain and it looked as if they were on their way to score a touchdown. The front seven of Duncanville was not having it, as the Panthers held IMG to a field goal.

The Panthers answered with a touchdown drive that only took five plays to put seven points on the board. The explosive Roderick Daniels Jr got the crowd off their feet with the help of quarterback Grayson James completing a pass as Daniels used his elite speed to score on a 35-yard play!

On the ensuing drive, IMG was not to be out done as they we able to strike in the air with McCarthy throwing a boom to Shawn Miller for a 61-yard score. It seemed that we were going to be in for a shootout as the score was 10-7 in the first quarter.

In the second quarter, both teams were able to stop each other on multiple drives. Finally, IMG was able to put together a drive 12 play drive when McCarthy completed a pass to Jacorey Brooks for a 15-yard touchdown. The Panthers knew it was time for them to answer back. Grayson James was up for the task. James used his dynamic wideout Daniels Jr for a 13 yarder. On the next play he went right back to him for another completion for 9-yards.

Then James led his wideout Jerrale Powers to the right corner of the endzone for a catch that seemed to be a touchdown. The referees did not see it that way, and the crowd was in an uproar. Right before halftime the Panthers barely missed a field goal kick, and the half ended with the score, 17-7.

As the third quarter began, IMG Academy was able to stop the momentum that Duncanville had built up in the second quarter. They then scored 17 unanswered points.

It seemed as if the Panthers were one big play away to make this game go back into their favor, but it was not to be. Grayson James was able to link up with Rodrick Daniels Jr for a 14-yard touchdown and you could see the fight in the Panthers, but IMG was just too much, scoring yet another touchdown.

In the end, the Panthers came up short 41-14. Duncanville’s Head Coach Reginald Samples gave a heartfelt speech to his team. Fans could see these young men are ready to keep working hard. The Panthers next game will be on the road October 23rd against the Waco Lions. 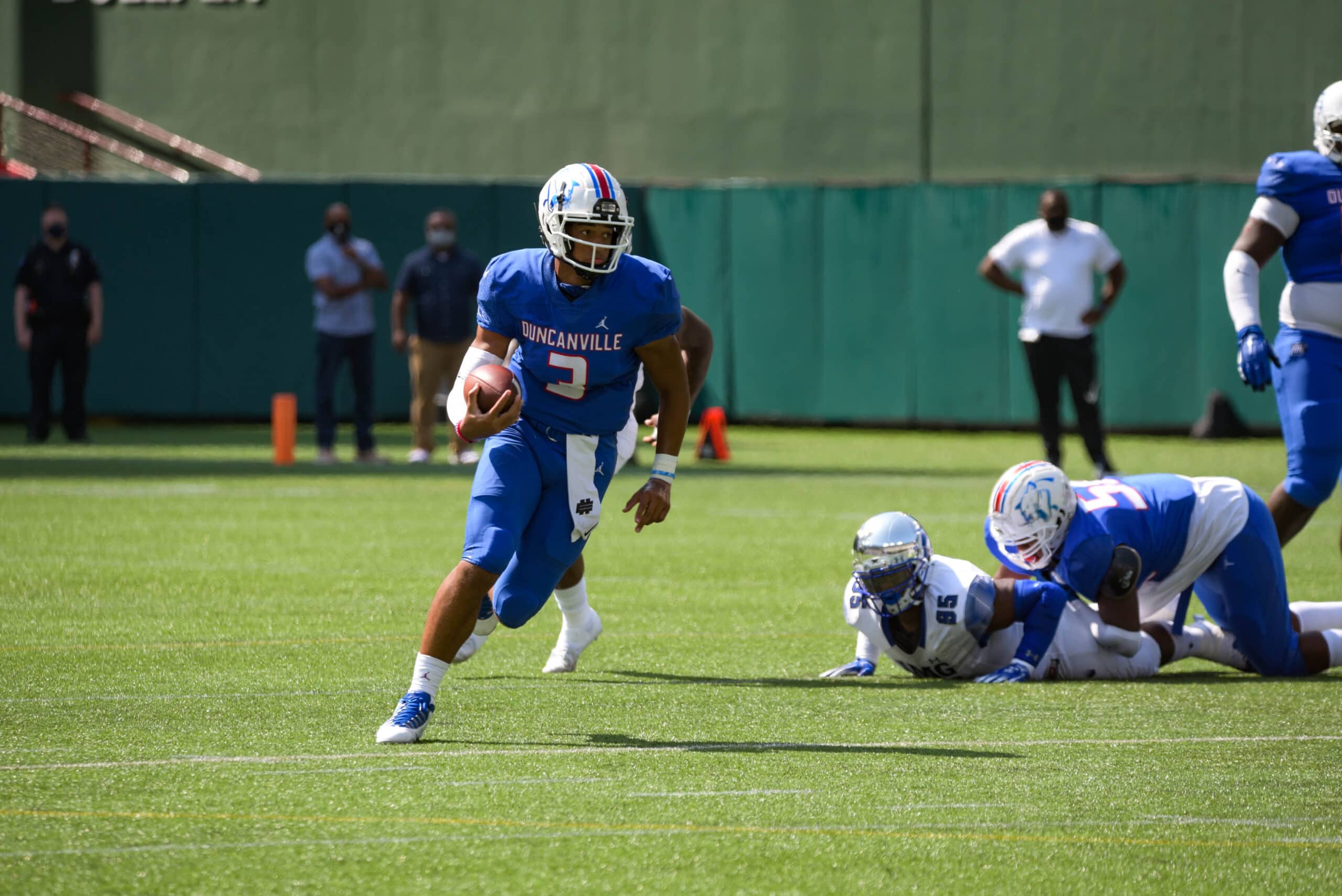