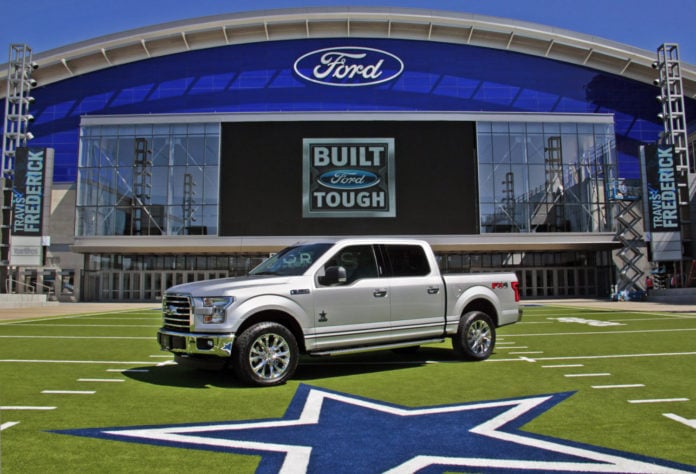 Tony Romo might not be ‘Built Ford Tough’, but the Dallas Cowboys Edition Ford F-150 is! This limited edition Ford truck is a F-150 XLT with chrome package (#1 volume seller in Texas) painted in the Cowboys legendary helmet silver. Only 400 of the special edition Cowboys’ F-150s will be sold.

The 2016 Ford F-150 Dallas Cowboys edition went on sale today. Cowboys fans can find the truck at select dealerships in north Texas, from Texarkana to El Paso – with most concentrated in the Dallas-Fort Worth area. MSRP is $44, 465 with a portion of the proceeds from the sale of these limited edition trucks going Happy Hill Farm. 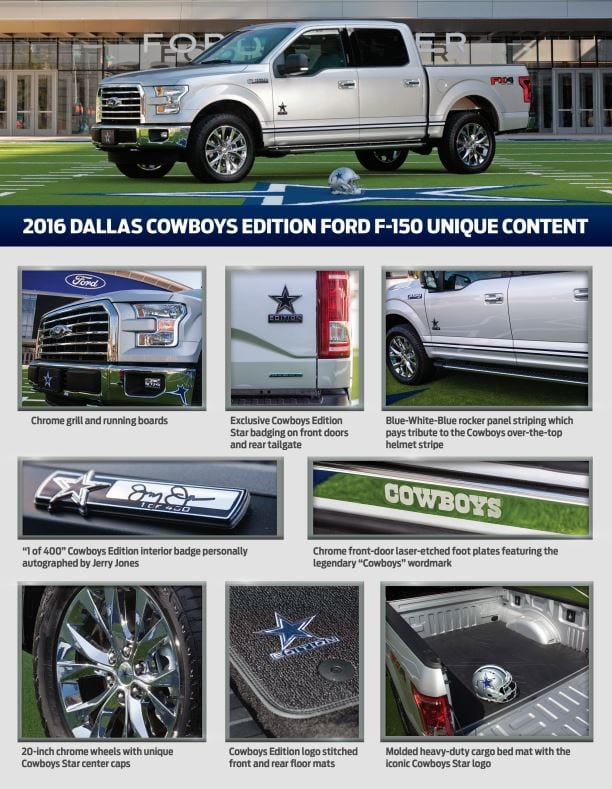 “It has been 22 years since Ford and the Dallas Cowboys offered a Cowboys Edition F-150,” said Greg Wood, Dallas Regional Sales Manager for Ford Motor Company. “I can’t think of a better way to celebrate the opening of the Ford Center at the Star and the beginning of a new Cowboys season than to offer both F-150 and Cowboys fans the opportunity to purchase one of these incredible trucks. More importantly, through this joint project both Ford and the Dallas Cowboys are able to provide additional support to the critically important mission at Happy Hill Farm.”

The launch of this limited-edition F-150 also marks the opening of the Ford
Center at The Star in Frisco, Texas. A one-of-a-kind, state-of-the-art training
facility, The Star will serve as corporate headquarters for America’s team,
featuring practice fields and a multipurpose indoor stadium for Cowboys players
as well as athletes in the Frisco Independent School District.